Bishop Rosemarie Wenner of Germany will be the next president of the Council of Bishops, marking the first time a woman from outside the United States will lead the global body.

The council on Nov. 2 unanimously elected Wenner president, and Bishop Warner H. Brown Jr. of the California-Nevada Annual (regional) Conference as the president-designate.

Wenner will start her two-year term on the third day of General Conference, the denomination's top-lawmaking body. Brown will succeed her in 2014.

Bishop Larry M. Goodpaster, the Council of Bishops president now, said he thinks Wenner will bring "a great spirit" to her new role. Goodpaster has worked closely with Wenner in the past two years during her time as president-designate.

"She has a great grasp of United Methodism around the world and is just a wonderful person to work with," said Goodpaster, who also leads the Western North Carolina Annual Conference. "I think she brings some really positive leadership to the whole church."

What the council president does 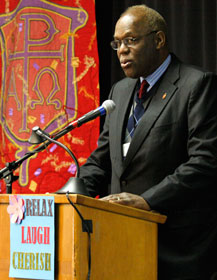 Bishop Warner Brown is elected president-designate of the Council of Bishops.

The council president is responsible for presiding over the bishops' executive committee and the twice-yearly council meetings. Goodpaster said the president has a responsibility to guide the bishops in their deliberations and remind them of their mission to make disciples.

Only General Conference can speak officially for The United Methodist Church. However, the council president sometimes is called on to speak to journalists and others within and outside the denomination on behalf of the bishops and church teachings.

Wenner said she hopes to lead the council and her fellow United Methodists by "modeling what it means to be a Christian."

She has asked her fellow bishops for prayer and support. "I am trusting in my colleagues because it is a team effort," she told United Methodist News Service.

To be a more global church

The council presidency typically rotates around representatives from each of the five U.S. jurisdictions and a representative from the central conferences church regions in Africa, Europe and the Philippines. Council presidents have come from outside the United States before. Bishop Emilio de Carvalho of Angola, for example, who served from 1991 to 1992, was the first African bishop in that position.

Wenner, 56, is a trailblazer in her own way. When she was elected bishop of Germany in February 2005, she became the denomination's first woman to be named to the episcopacy outside the United States.

"I hope just the fact I am coming from the central conferences is seen as a sign that the church lives in this reality of a global church," Wenner said.

Only in working together as a global church, she said, will United Methodists fulfill the church's calling from God.

Wenner grew up in Eppingen, a village in southwestern Germany, and was nurtured by a small United Methodist congregation. She studied at the United Methodist Theological Seminary in Reutlingen and served as pastor of congregations in Karlsruhe-Durlach, Hockenheim and Darmstadt-Sprendlingen before her appointment as superintendent of the Frankfurt District in 1996. She and her husband, Tobias Wenner, live in Nussloch, Germany.

Bishop Gaspar Joao Domingos of West Angola said Wenner's election to the council presidency shows that the central conferences have values they can share with the global church.

"It also will be a great joy that from a central conference context, it will be the first woman presiding, and that is a context that is dominated by men," said Domingos through an interpreter.

Brown, 64, was elected bishop by the Western Jurisdiction in July 2000. He first served in the Denver Area, which encompasses the Rocky Mountain and Yellowstone annual conferences. Since 2008, he has served the San Francisco Area, which includes the California-Nevada Annual Conference.

Brown, a native of Baltimore, began preaching as a youth. He later served as a pastor in western Pennsylvania, a staff member for the California-Nevada Annual Conference, a pastor in Oakland and Bakersfield, Calif., and a district superintendent. He has a bachelor of arts in sociology from the University of Maryland and a master of divinity from Wesley Theological Seminary in Washington. Brown and his wife, Minnie Jones Brown, have three children.

At their spring meeting and again on Nov. 1, the bishops endorsed an amendment to the church's constitution that would allow the council to elect one of its own to a full-time, four-year position as president without the usual responsibilities of overseeing a geographic area. To be ratified, the amendment needs a two-thirds majority at General Conference and a two-thirds majority of all annual conference voters

If the amendment goes into effect, Brown said he will assist the new "set-aside bishop" in his or her role.

Brown said he considers his role to be "a servant" of the council.

"Our main business is making disciples and empowering churches to be the instruments of God's love," he said. "As we grow and pay attention to the way God is already working among us and cherish that, it will awaken vitality."