Beneath a gorgeous sunset, 50 or so people contemplated a display of empty red dresses and a board gently floating in Lake Benson. Candles burned inside glasses on the board. 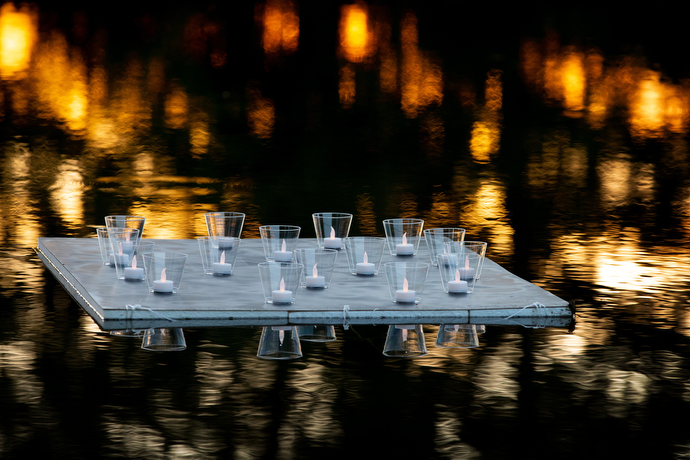 The National Crime Information Center reports that there were 5,712 reports of missing American Indian and Alaska Native women and girls in 2016. Murder is the third-leading cause of death among this population, and rates of violence on reservations are as much as 10 times the national average. It’s believed sex traffickers are to blame for some of the missing.

“A daughter, an auntie, a grandmother, a cousin — someone maybe not even allowed to grow up and mature,” said Mary T Newman, a lifelong United Methodist of Cherokee ancestry who works with the Tennessee-Western Kentucky Conference toward better understanding of Native cultures.

“We have to stand for justice,” she continued. “We have to lift up prayers and we have to say, ‘It needs to stop.’ An epidemic of women and girls who are dying has got to stop, and we are the ones that have to stand up and say there should be justice.” 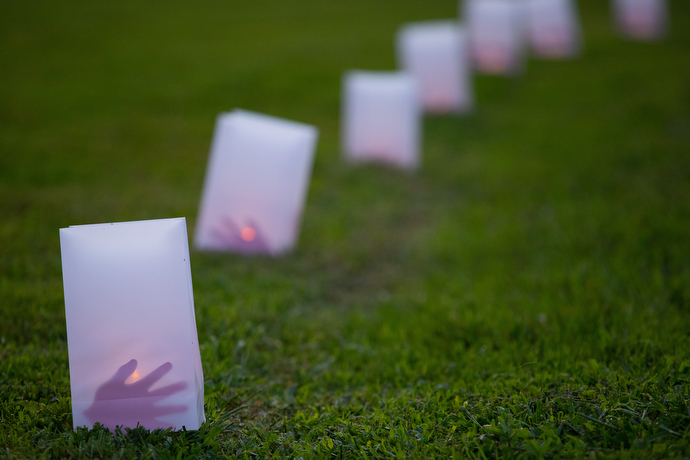 Luminarias line a path to the lakefront at Lake Benson Camp during Native Moccasins Rock. The red hands are a symbol of solidarity with missing and murdered indigenous women. Photo by Mike DuBose, UM News. 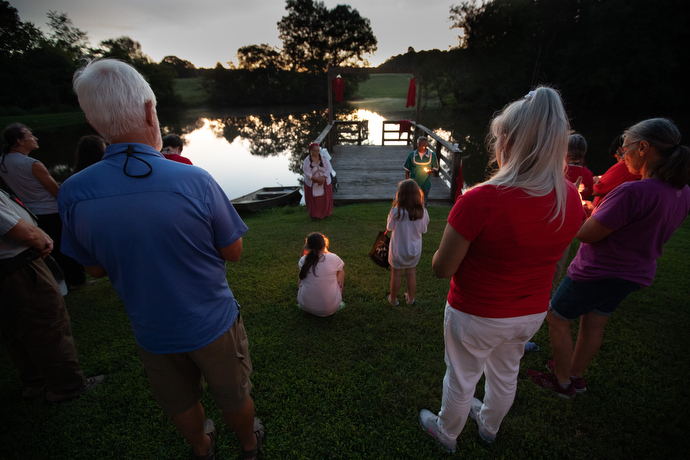 Attendees of the Native Moccasins Rock gathering take part in a service of remembrance for missing and murdered indigenous women at Lake Benson Camp. Photo by Mike DuBose, UM News.

The kickoff event Aug. 12 was a solemn beginning to the Aug. 12-14 Native Moccasins Rock conference, a relaxed and convivial annual meeting to consider all things Native American. It’s held at Camp Lake Benson, a bucolic Christian camp and retreat center about an hour west of Nashville.

Activities for the 20th iteration of the event included working with pottery, bead-making and crafting dolls from corn shucks, dance, a forum about the use of Native American images and mascots by sports teams and a basic genealogy tutorial.

“My interest in Native American culture is not just a curiosity,” said Linda Quick of Nunnelly, Tennessee, one of several conference attendees who suspects they have Native American heritage but haven’t taken steps to confirm it. “I love the prayers, and I love the thought of the Great Spirit.” 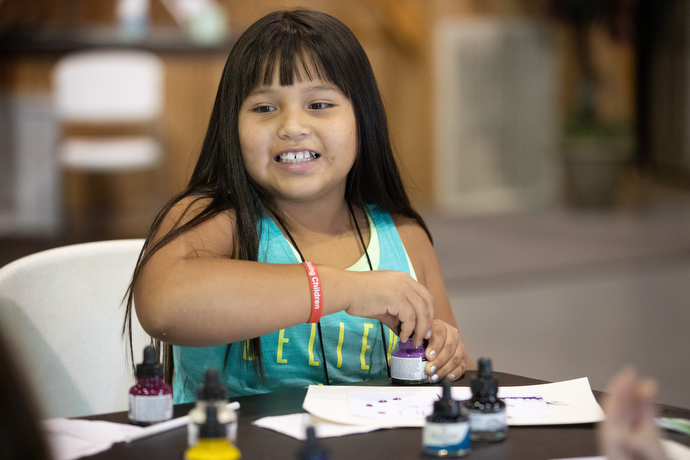 Taloa Thompson, 8, during a workshop on painting by the spirit during Native Moccasins Rock.Photo by Mike DuBose, UM News.

What’s so wrong about Indian mascots?

As a boy growing up in Middle Tennessee, Jeffery Hobbs selected the Washington Redskins as his favorite NFL team.

It made sense. Hobbs is part Native American, along with African American.

“’Redskins’ did not mean that much to me,” said Hobbs, who grew up to be an authority on the mascot issue, as well as relations between Native Americans and African Americans …

“We only see each other once a year, but there's still a sense of community,” said Turrentine, who lives in tiny Normandy, Tennessee, between Nashville and Chattanooga. “They teach you about the culture and to not be ignorant, because a lot of stuff you've learned about Native people comes from Western (movies). It's really cool to learn all that.”

The Native Moccasins Rock conference, known as “Mocs Rock” for short, is directed at Native and non-Native Americans, said Debbie Fitzhugh, a member of the Secwépemc Tribe and co-chair of the Native American Ministries Committee of the Tennessee-Western Kentucky Conference.

“What's kind of sad is that there are a lot of Native American people out there that didn't grow up in their culture,” Fitzhugh said. “So we show people a traditional … way of life, really.”

“Then we'll have dancing and drummers, and if you come by you’ll get pulled off your chair and you're going to enjoy it,” Fitzhugh said. “Everybody is going to be on the dance floor at some point, so that makes it a lot more fun.” 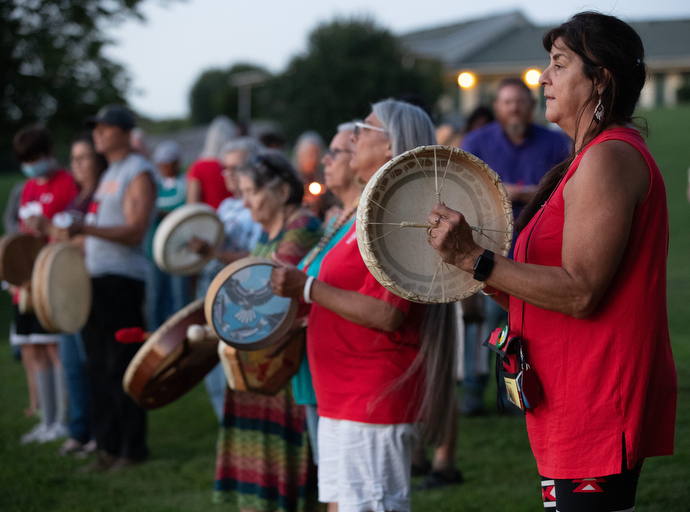 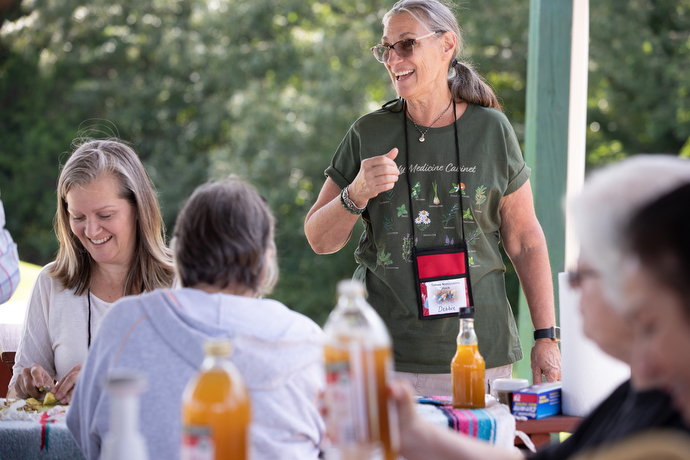 Along with the more serious topic of missing women is a talk by an expert on using Native American stereotypes as mascots and names for sports teams. Activist Jeffery Hobbs, who speaks often on the issue, gave a presentation. He is descended from African Americans and Native Americans.

“I learned a lot about the mascot issue not only through school, but my own personal life and how it affected myself, my friends and my family,” Hobbs said in an interview before his presentation. “It gives us a negative image of ourselves … primarily because of the behavior of the fans and the mocking of the culture. The appropriation of ceremonies and what we wear is all caricature.” 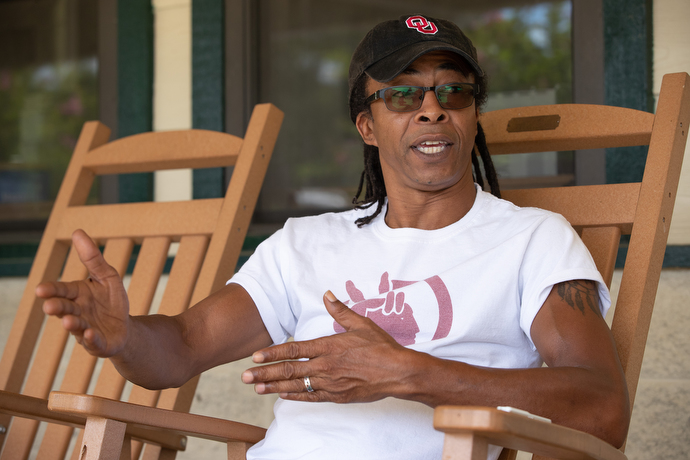 Jeffery Hobbs, who is of Cherokee and African descent, is a well-known activist on issues affecting Native Americans. He gave a presentation on the issue of using Native American portrayals as mascots for sports teams during Native Moccasins Rock. Photo by Mike DuBose, UM News.

Turrentine says attending the conference has made her more discerning of media portrayals of Native American culture.

“I can't watch certain things now without being like, ‘Is that really accurate?’” she said. “And when people at my school say something and they’re obviously parroting something, it's kind of nice to be like, ‘Well, maybe don't say something like that. It's not so very nice.’” 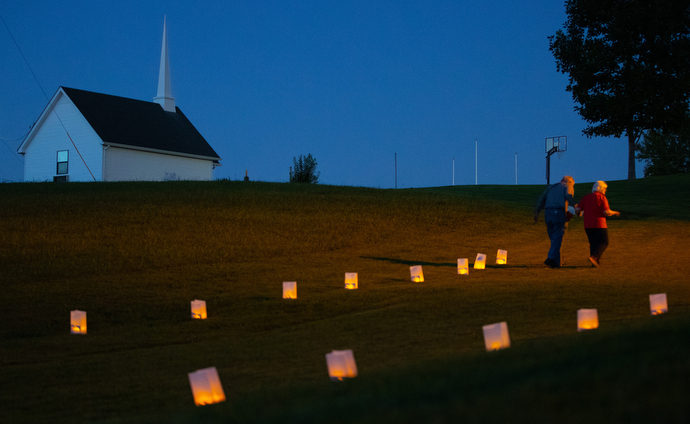 Luminarias line a path to the lakefront for a service of remembrance for missing and murdered indigenous women during Native Moccasins. In the background is the Grimsley Memorial Chapel of Finley United Pentecostal Church. Photo by Mike DuBose, UM News.

Although she suspects she has a Native American background based on her appearance and an affinity for the culture, Quick, 77, decided not to get genetic testing to prove it. She fears she wouldn’t get the answer she wants.

“Maybe I truly am a Native American, or maybe it just calls to me,” she said.

“I've been exposed to the indigenous culture since I was a kid, and I've always been drawn to it. If you just stop and even look around at the colors, the beading, the energy — it has its own magnet. And when you get stuck on it by the magnet, then you find out about the gentleness.” 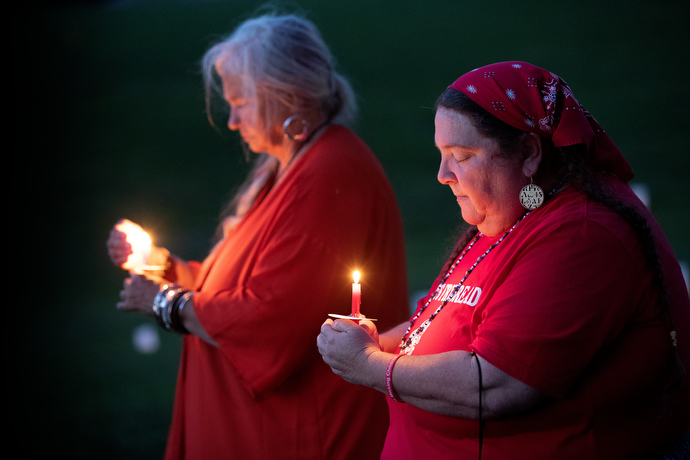 During the past 27 years, Reidland United Methodist Men and multi-denominational partners have built more than eight miles of handicap ramp. This month, the men’s ministry is on schedule to build its 1,000th ramp. The Tennessee-Western Kentucky Conference has the story.
Social Concerns