Wesleyan Covenant Association leaders say a breakup of The United Methodist Church is necessary and inevitable, and they want to be ready.

“We are preparing for the launch of a new Methodist church in the aftermath of General Conference 2020. We see the Wesleyan Covenant Association as a bridge to this new church,” said the Rev. Keith Boyette, WCA president.

Boyette was among those speaking at the WCA’s fourth Global Gathering, held Nov. 9 under the title “Transformed.”

The event drew about 1,000 people to Tulsa’s Asbury United Methodist Church, with another 2,000 watching via simulcast at 86 locations around the U.S. and in other countries.

Looking toward the future, the WCA released the draft of a Book of Doctrines and Discipline that could be used by a new, traditionalist denomination. The global legislative assembly approved “receiving and commending” the document, but Boyette stressed it’s a work in progress and invited WCA members and others to offer comments as revision continues.

WCA leaders also announced that the legislative assembly approved the formation of six ministry task forces to help flesh out priorities of a new church. 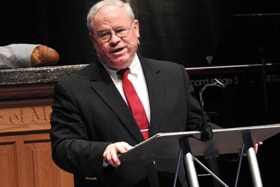 The Rev. Keith Boyette speaks at the Wesleyan Covenant Association’s latest Global Gathering, held Nov. 9 in Tulsa, Okla. Boyette is president of the WCA and said the traditionalist group is “preparing for the launch of a new Methodist church.” Photo by Sam Hodges, UM News.
Boyette, in his address, predicted such a denomination would have term-limited bishops, lower apportionments for local churches and a smaller general church.

“We envision a leaner, more nimble church which is not top heavy with an institutional bureaucracy that constrains rather than liberates us to share the good news,” he said to applause.

Among those who traveled long distances to hear such a message and make connections was Chris Cutler, a layman from Imlay City United Methodist Church in Michigan.

“We’ve already expressed to our conference that we would like to exit,” Cutler said.

The WCA formed in 2016 and has become a leading member — with Good News, the Institute of Religion and Democracy and the Confessing Movement — of the Renewal and Reform Coalition. That unofficial advocacy coalition favors an evangelical focus for The United Methodist Church, and a definition of marriage as between a man and a woman.

The coalition supported the Traditional Plan that passed 438 to 384 at the rancorous 2019 General Conference in St. Louis. The plan strengthened church restrictions against ordination of gay clergy and same-sex unions.

Though on the winning side, WCA leaders describe the denomination’s conflict as longstanding, harmful and irreconcilable.

“The WCA believes The United Methodist Church will come apart, either by an agreed plan of separation, enacted by the 2020 General Conference, or through local churches deciding to exit the denomination due to the never-ending cycle of conflict, inaction and dysfunction,” Boyette said.

Evidence of the divide could be seen elsewhere in Tulsa. As the WCA met, about 200 others gathered at Boston Avenue United Methodist for a prayer vigil and worship service supporting full inclusion of LGBTQ persons in The United Methodist Church.

It was a response to the WCA meeting, not a protest, said the Rev. David Wiggs, Boston Avenue United Methodist’s pastor.

“We began to talk about how we might have a different voice of Methodism represented here in Tulsa. It grew from there,” Wiggs said.

The WCA event included a Nov. 8 session where its 226-member global legislative assembly endorsed the New Denominations of United Methodism Plan, better known as the Indianapolis Plan. That plan would divide The United Methodist Church into two or more denominations.

It’s among various options that will be considered at the 2020 General Conference, and behind-the-scenes conversations about the denomination’s future continue.

Boyette helped negotiate the Indianapolis Plan, and the WCA’s governing council had already endorsed it. The legislative assembly added its backing by a margin of more than 90%.

“It is, by and large, a fair and just plan that would end a long and acrimonious dispute that has undermined the health and vitality of The United Methodist Church,” Lawler told the global gathering.

But the WCA released a statement promising that — in the absence of what it considers a fair separation plan — it would work at the 2020 General Conference for full implementation of the Traditional Plan to protect traditionalist churches remaining in the denomination.

Boyette and other leaders also noted in Tulsa that the Association of Korean United Methodist Churches — representing some of the Korean American congregations in the denomination — has voted to align with the WCA. Boyette said that included working toward the creation of a new traditionalist church.

Bishop Pedro Torio of the Baguio Area in the Philippines gave a homily at the global gathering. He joined the Rev. Tom Harrison, pastor of Asbury United Methodist, in presiding at communion. 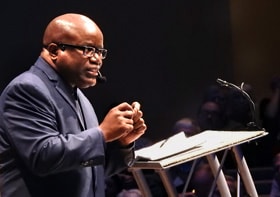 Cara Nicklas, an Edmond, Oklahoma, lawyer who serves on the WCA council, also addressed the crowd. She cautioned that a new denomination would not be able to blame centrists and progressives if it falters in independence.

That the fallout from the 2019 General Conference has hit a lot of churches hard, including his own, came through in the Rev. Shane Bishop’s remarks.

“Unless we have an incredible last quarter, we will fail to grow for the first time in 23 years,” Bishop said of Christ (United Methodist) Church in Fairview Heights, Illinois. “This has been a really discouraging time.”

Bishop got a laugh when he said he tries to confine his whining to 20 minutes every Tuesday. But he was blunt about the need to stay focused on sharing the gospel.

“The good news of Jesus Christ hasn’t gotten worse just because our denomination is blowing to crap.”

The largest United Methodist conference in the U.S. announced it is blocking church exits as a result of “the misleading, defamatory, and false statements and materials shared with local church members.”
General Church