Ten volunteers from Indian Run United Methodist Church in Dublin, Ohio, planned to spend a week in Haiti, helping to rebuild a church and bring cheer to local children. But when their flight was canceled, they ended up staying a few days longer, hearing testimonies of faith from earthquake survivors they would not have met otherwise.

One woman had rushed inside her collapsing house to rescue her sleeping 4-day-old baby. She got her child to safety but suffered serious head and shoulder injuries. The mother was taken to the Dominican Republic for medical care, and her husband was warned she likely would not survive. "And she's the one telling this story," Howard Baulch, the United Methodist team leader, recalled.

The mother believes she and her baby survived through the grace of God - or as she told the team, "My baby is special to God."

Since the Jan. 12, 2010, earthquake, some 80 United Methodist Volunteers in Mission teams have traveled to Haiti to work on infrastructure projects prioritized by the Methodist Church of Haiti. Many have returned home inspired by Haitian faith and eager to do more mission work in the Caribbean nation.

Nearly 180 United Methodist volunteer teams are scheduled to work in the country in 2011.

A long history of cooperation between the Haitian church and United Methodist volunteers is enabling the teams to accomplish much more than they could on their own.

In six to eight months, the teams are completing projects that used to take three to five years, said the Rev. Gregory A. Forrester, who helped develop the denomination's Haiti Response Plan for volunteers. Forrester, the United Methodist Volunteers in Mission coordinator for the Northeastern Jurisdiction, has led three teams to Haiti since the earthquake.

"The response by UMVIM teams has been overwhelming and has enabled rebuilding to occur quicker than could have been anticipated for the damaged (Haitian Methodist) structures and their communities," he said.

The Rev. Jim Gulley, a United Methodist agriculture specialist and Haiti earthquake survivor, said the volunteers are playing a vital role in giving hope to Haitians.

"We may be impatient at times if things don't work as well as we'd like," he said. "But on the other hand, we are accompanying the Methodist Church of Haiti and the people of Haiti through this process. And I think that they're really convinced that ... we're really determined to be there for the long haul."

The earthquake response marks the first time United Methodist Volunteers in Mission and the United Methodist Committee on Relief have worked so directly together in designing and funding a recovery plan of this magnitude. 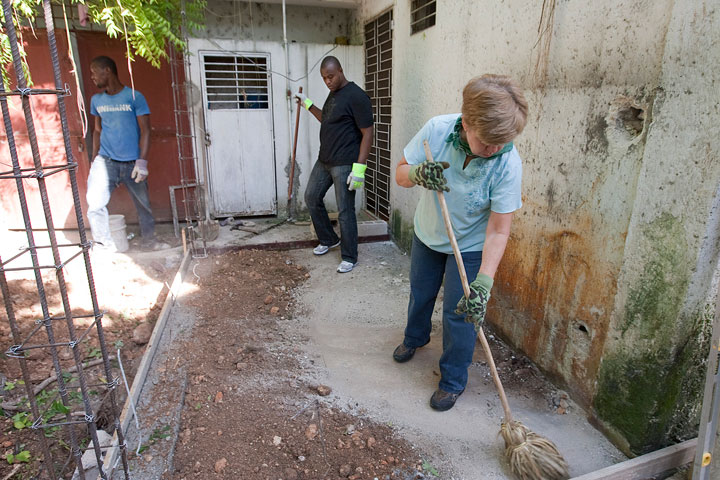 Each volunteer team of 10 to 12 people must, in addition to covering its expenses, provide $3,500 to help hire Haitian workers and cover the cost of supplies. UMCOR matches those funds.

That means for every United Methodist volunteer, two Haitian workers are hired. The effort has provided jobs for hundreds of Haitians, said the Rev. Mike Willis, who was the first Haiti volunteer-management coordinator in the response plan's pilot stage.

Haitian workers get paid and can continue the planned building projects even when Volunteers in Mission teams are not there. For example, work will continue even though 12 teams that were to travel to Haiti in late January have been rescheduled because of fears of political unrest around the presidential runoff election. The election was initially set for Jan. 16 but has since been postponed to February or later. United Methodist staff members in Haiti are monitoring the situation.

Ultimately, the goal is to train a Haitian to take on the role of volunteer coordinator for the teams coming to Haiti, said Una Jones, who leads the mission volunteers department at the United Methodist Board of Global Ministries.

As the teams have built churches and schools, they also have built relationships with Haitians.

In the California-Nevada Annual (regional) Conference, volunteers underwent "cultural competency" training before their trip to better integrate with the Haitian work crews. Almost every volunteer agreed the training was helpful, said Philip Bandy, the conference's interim director of volunteers in mission.

Bandy said he was most struck by the joy for life he encountered in Haiti.

"They don't let their desperation eat them," he said. "The Methodist Church in Haiti is alive and well."

Experience in Haiti has affected the faith of mission volunteers, such as Trey Barclay from Grace (United Methodist) Church in Cape Coral, Fla. Barclay made two trips last year to Haiti, but it was the second visit, in November, that changed him. 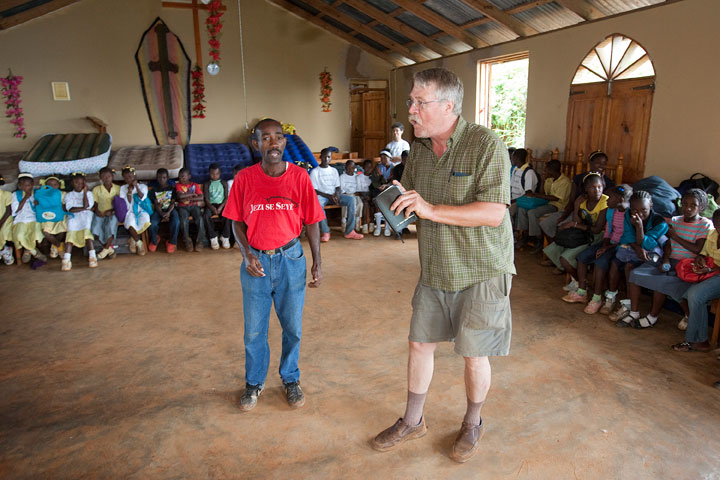 That moment came when his team visited Grace Children's Hospital. Another church member was making balloon animals for the young patients, and almost all of the youngsters were smiling and laughing at the rubbery creatures - except for one little girl. Barclay stood next to her and tried to make her smile, but initially he had no luck.

He prayed for her, and for reasons he can't quite explain, he tapped her foot. Just one small touch, and she could no longer suppress a smile. Soon she was laughing and playing like the other children.

"The look in her eyes I will never forget," Barclay told his fellow church members. "I know she is sick; I don't know how her life will turn out. But I do know for a very short time she was happy. She wasn't thinking about being sick or her future; she was just enjoying being the child of God that she is."

The experience prompted Barclay to make a decision of his own. He had attended Grace Church for years but had never been baptized. His visit at the children's hospital moved him to become baptized while in Haiti.

When political protests in Port-au-Prince shut down the airport in December, the Ohio team found itself staying longer than expected. The planned weeklong trip stretched to 12 days and brought additional challenges.

The group was working in Mellier, a village about a two-hour drive west of Port-au-Prince, when word came from United Methodist staff that the roads were blockaded.

Despite the uneasy time, the team members never worried about their safety, Baulch said. Their construction project halted, and the local school closed. The roads were eerily still because blockades had prevented traffic from passing through. Finally, United Methodist staff members were able to send a vehicle to take the team to the Methodist Guest House in Petionville. From there, it took most of the team members three days to get flights home.

"As American Airlines continued to cancel rescheduled flights, I kept asking, 'Why? Why were we being asked to stay? Why were we still here?'" Baulch said. "My only answer at that point was the story we can tell."

When the team finally returned home Dec. 15, the volunteers found their congregation and others in their community eager to hear about their experience. Baulch, who directs missions for the church, said those discussions sparked more interest in missions than he had seen before. He wants to use that interest to encourage more mission trips to Haiti.

"Even amidst the dangers, strife and stress," he said, "we were always in God's hands and able to do his work."

Death and Resurrection in Haiti