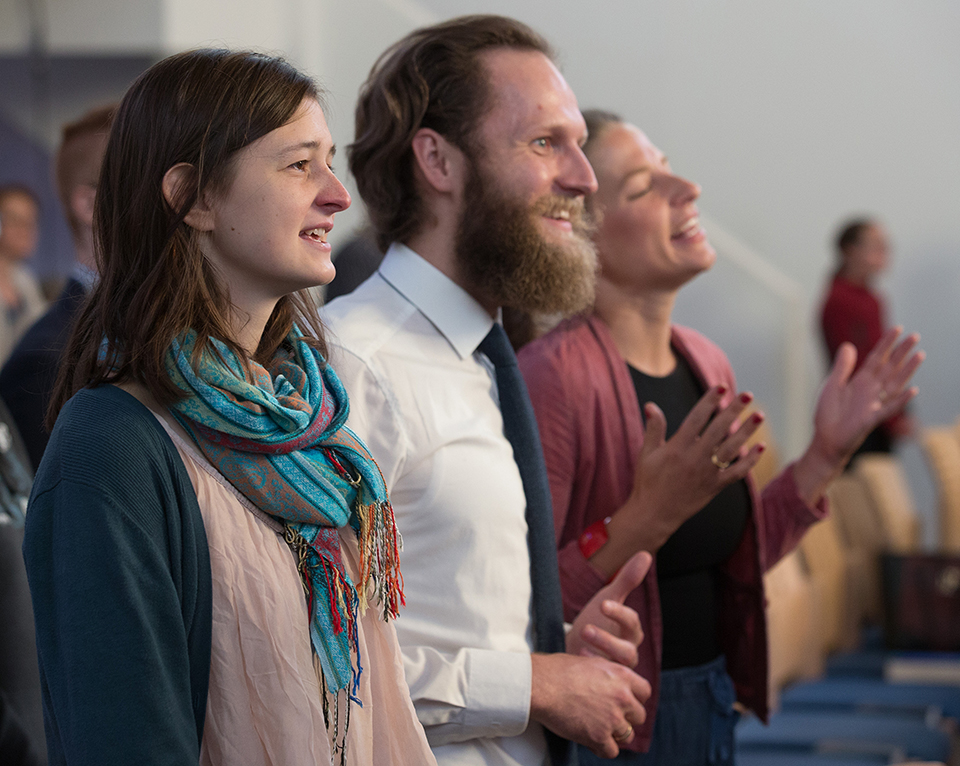 Parishioners sing during worship at the United Methodist Church of the Redeemer in Munich, Germany. From left are Jula Carlsen and Daniel  and Carina Kuß.

Editor’s note: This is the ninth in an occasional series of stories, “German Methodism: A strong Christian voice,” about the 51,000-member United Methodist Church in Germany.

On the surface, a lively church in a new building with plenty of children and youth programs might not seem to have much in common with a tiny village church that runs a weekly community café or an inner-city church with aging members and multiple outreach programs.

Those United Methodist churches are quite different from another inner-city church that runs a nonprofit afterschool program for poor or immigrant children, or a church in an economically depressed area that holds regular outdoor services.

All those churches, as well as a group of young adults who just get together for dinner, have one thing in common: Each is an example of a vital congregation in Germany — an effort to reach out in “fresh expressions,” which Bishop Harald Rückert said is “simply doing good work.” 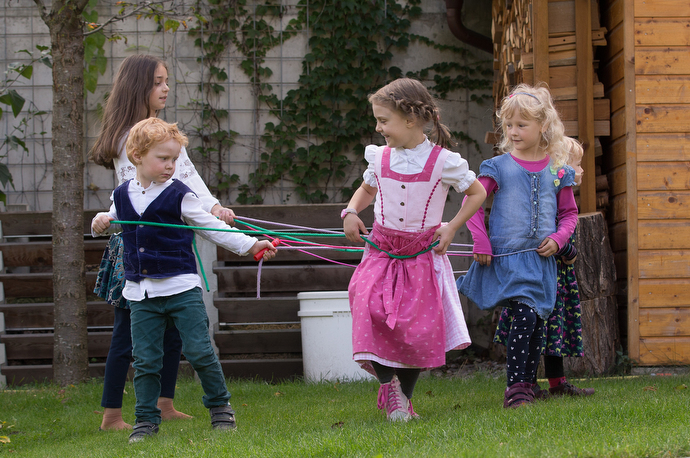 Children play outside after worship at the United Methodist Church of the Redeemer in Munich.

“I urge my church to try new things. If it fails after a year or so, so what? We try something else,” the bishop said. “In order to fulfill our mission of reaching out to make disciples for the transformation of the world, we must be very courageous and try out new things.”

The 51,000-member United Methodist Church in Germany has taken experimentation to heart. 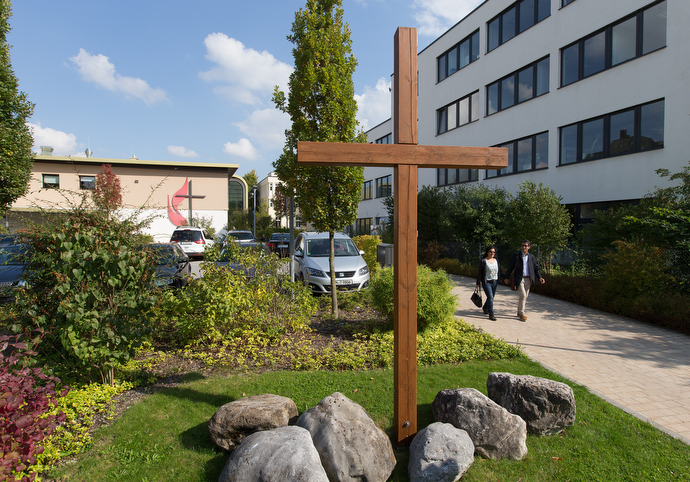 The United Methodist Church of the Redeemer in Munich, Germany, served as a polling place in Germany's September 2017 elections.

Bezirk München-Erlöserkirche, or Church of the Redeemer, is a thriving, modern congregation in Munich that livestreams sermons and serves a population of children and youth that would thrill any U.S. congregation.

On a busy Sunday last fall, worshippers rubbed elbows with voters — the church’s new building served as a polling place during the German elections.

Verena and Tanemasa Rahn have attended for about six years with their two daughters, Tamiko, 6, and Ayumi, 2. 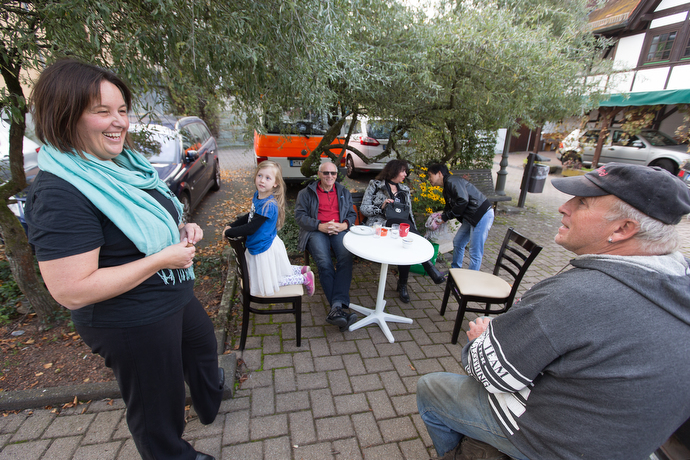 The Rev. Heike Miller (left) visits with Harry Faust (right) and other community members outside the United Methodist Church in Lorsbach during Café Gegenüber, a weekly gathering for coffee, cake and coversation. The café helps the church serve as a social center in the community.

“I didn’t grow up in church, but I wanted my daughter to be at a church where she could learn about God,” Verena Rahn said, adding that a church with so many children is unusual in Germany. She credited the former pastor, who in 2007 began emphasizing programs for families with children.

The Munich church is a stark contrast to the 12-member Lorsbacher Gemeinde (Lorsbach United Methodist Church) of the Frankfurt Rufer Circuit. But the tiny church is a vitality center for the village with Café Gegenüber, a weekly gathering for coffee, cake and conversation.

“We started the café last year and at first only in the summer,” said Helga Saalbach, a member of the church. “We wanted to do it for the people here. A long, long time it was our dream to have a café.” 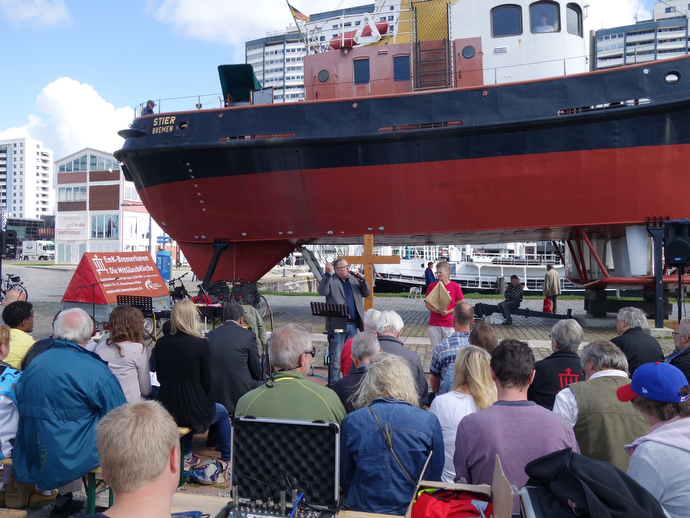 Another innovative church can be found in the port city of Bremerhaven, an economically depressed area with 18 percent unemployment. Evangelisch-methodistische Friedenkirche Bremerhaven (Bremerhaven United Methodist Church) was struggling in 2010 — a pastor came to preach just twice a month and the conference was considering closing the church and selling the building.

Bishop Rosemarie Wenner appointed the Rev. Christhard Elle as pastor and gave the church four years to turn around. For Elle, who had been secretary for church growth for the denomination in Germany, it was a chance to practice what he had preached to other churches.

“People said our friends are already here, we can’t invite anyone to come, so we took church outside,” Elle said. 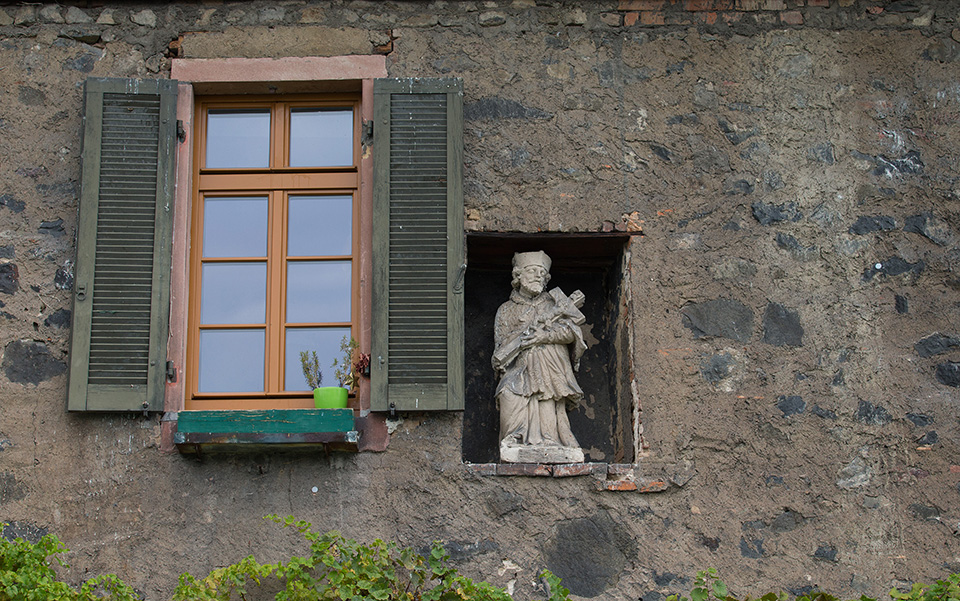 "The 51,000 member United Methodist Church in Germany may be a minority church, but it’s a vital church" — Bishop Harald Rückert.

United Methodist News Service traveled to Germany to report on the church's presence, challenges and successes in the European nation. Read more stories from our special coverage.

Members built a trailer to carry what they needed for outdoor services and held their first outdoor service on the fourth Sunday of Advent in 2010 on the "Drachenberg" (Dragon's Hill), Bremerhaven's highest peak.

“I felt like going outside was giving a testimony,” said Ruth Willinghöfer.

At that service, about 70 people who were out sledding came and sat with the members and listened, Elle said. “From then on, we knew our mission was that we were going to go outside.”

“We went through town and had a donkey with Mary and Joseph,” Elle said. “We handed out the Christmas story and a lot of people asked what this had to do with Christmas.”

From the 12 to 15 people who attended in 2010, the church now has about 70 people each Sunday. The church has a men’s group that meets on a sailboat and attendance is about half men, half women. In addition to the men’s group, there is a women’s group, a youth group and a Bible study breakfast.

“It is so different from the old German churches that are so traditional,” Jutta Missfeldt said. “There’s life in this church.”

Karina Griese said that the outdoor services have strengthened the faith of church members. “We get to be outside and share our faith freely and say, ‘Yes, I’m a Christian.’ How many people are bold enough to give testimonies even if there are strangers and guests they don’t know?” she asked.

Yet another church model is a young adult group in Stuttgart that gets together for dinner once a month. The group was started by The Rev. Mareike Bloedt, co-pastor of Stuttgart-Mitte (United Methodist Church in Central Stuttgart). 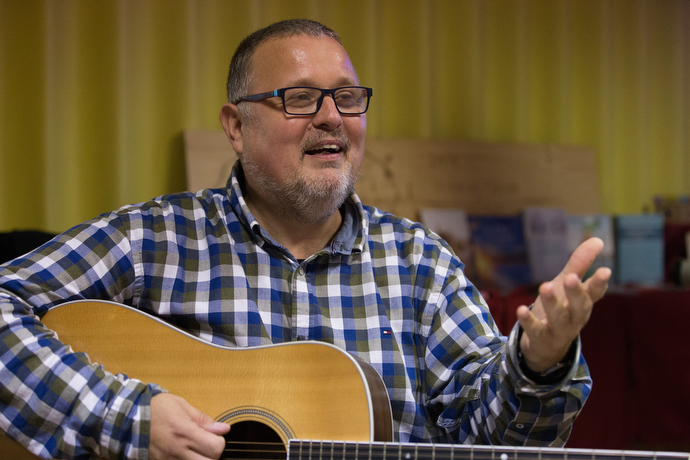 The Rev. Christhard Elle is pastor of the United Methodist church in Bremerhaven, Germany.

“I saw there was nothing for young adults. They were losing their connection with church,” she said. “We have five or six people every month, sometimes as many as 15. We talk a lot about faith.”

Saskia Duppel, who has been coming to the group for nearly two years, said her grandfather was a United Methodist minister. “I just wanted to stay in connection with the UMC,” she said, adding that her family is about 15 kilometers away.

The United Methodist Church-Frankfurt City has had a more traditional approach, with about 100 members and a host of outreach programs. The Rev. Uwe Saßnowski is senior pastor and leads the English-speaking international church as well as two German congregations. He oversees the Vietnamese church that meets in the building. 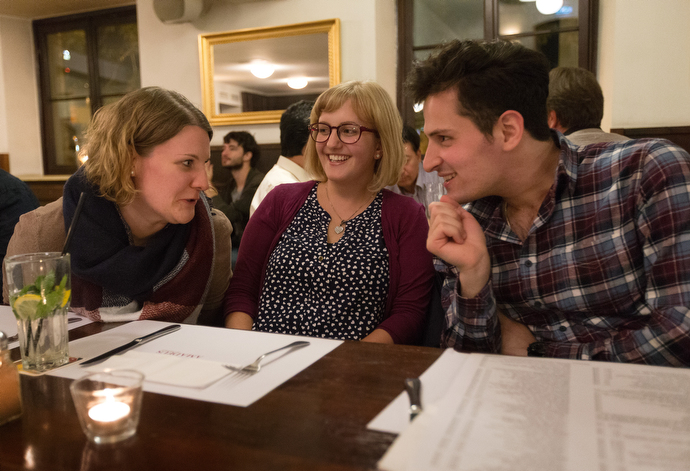 The Rev. Mareike Bloedt (center), pastor of the United Methodist Church in Central Stuttgart, Germany, visits with Miriam Schäuble (left) and Iskandar Obaid during a monthly dinner gathering at a local restaurant. “I saw there was nothing for young adults. They were losing their connection with church,” Bloedt said. “We have five or six people every month, sometimes as many as 15. We talk a lot about faith.”

The international church has “kaffee und kuchen” — coffee and cake — once a week for 35 women. About half the women are migrants and all are very poor, Saßnowski said.

On Thursday, the church holds a flea market that more than 300 people visit each week, as well as a luncheon for about 200 people. There is a 1.80 Euro charge for lunch, the pastor said, but at the end of the month if people are running out of money, they can eat for free. Some church members who work in the neighborhood also come for lunch.

Many of the volunteers for the flea market and luncheon are not church members, just people who want to help, he said. 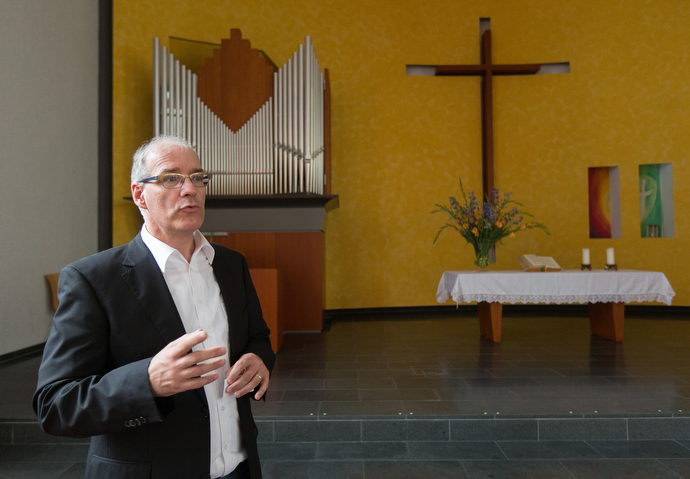 The Rev. Uwe Saßnowski, is senior pastor of The United Methodist Church-Frankfurt City in Frankfurt, Germany.

Mike House, a 70-year-old volunteer who isn’t a church member, said it’s something to do every week and gets him out of the house.

The commitment to social outreach has long been a tradition of the German church, but Saßnowski believes doing so at the expense of children and youth programs has cost the church. “We’ve lost the younger generation,” he said.

Serving children has helped double the size of the Friedenskirche (United Methodist Peace Church) in Hamburg. The church — down to about 30 members when a project to serve immigrant and poor children in the inner-city neighborhood was started — now has 60 members, said the Rev. Karsten Mohr, pastor of the church. 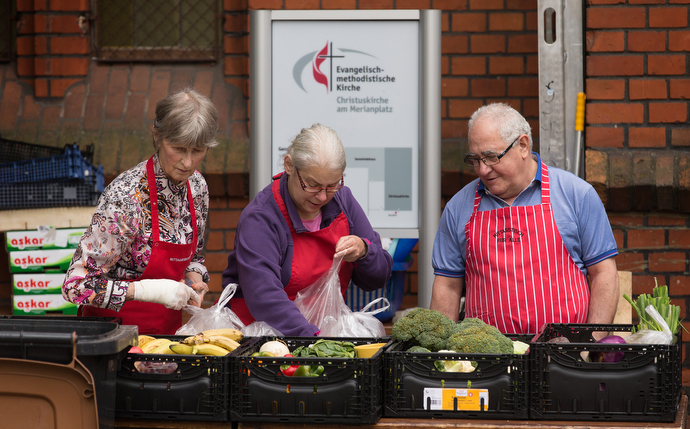 Volunteers prepare for a weekly flea market and produce sale at The United Methodist Church-Frankfurt City.

The church is also raising the money to expand the afterschool program for children, InselArche, from four to five days a week.

There are many examples of new ministries in Germany that have been born from mergers or even grew up where a church had been closed, Rückert said.

He said one of his favorite examples is the Metzingen United Methodist Church in south Germany, which closed and dedicated their Bible, cross and money to another church. Ten years later, a group of young leaders decided to turn the building into a rock-climbing gym. Now, young people who were mostly unchurched come in and meet for coffee and conversation, he said. 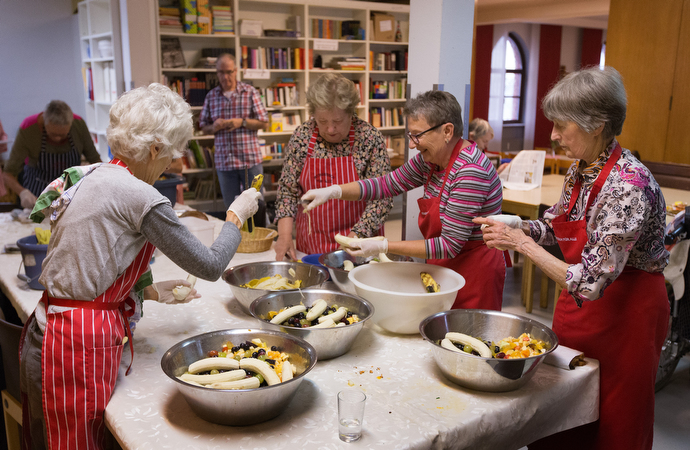 The United Methodist Church-Frankfurt City offers a weekly lunch for some 200 community members.

In other areas, mergers of small churches have created new vitality. “In the whole, we have both, growth and dying,” he said.

One issue facing all churches in Germany is that the society is becoming more secular, Rückert said.