Accept Makamba excels in her schoolwork. She is the best pupil in her second-grade class and actively participates during lessons. From looking through her school report book from the first grade, one can tell that Accept has prospects for a bright future.

The 9-year-old works harder than her friends, and her academic record is the result of sheer determination to succeed. She has one major hurdle not faced by other children in her class at Murewa Central Primary School: Accept is visually impaired. 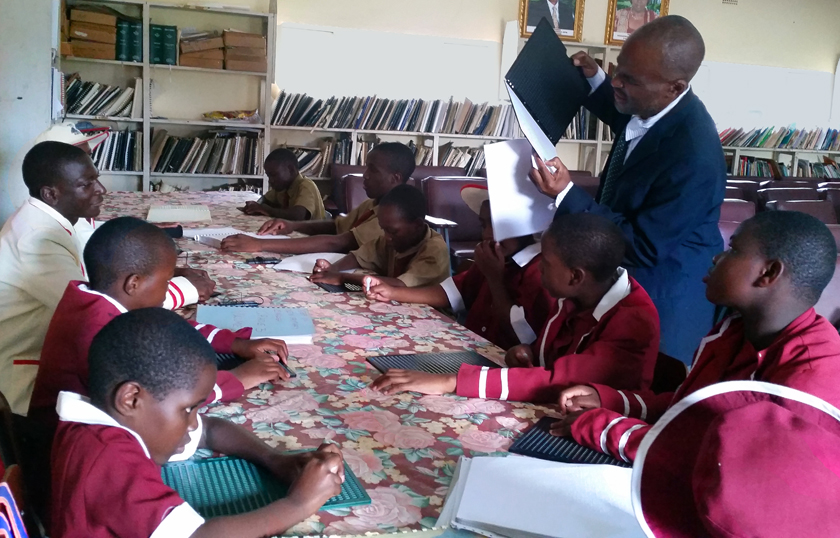 “We have an impressive academic record. None of our pupils have ever failed the Grade 7 examinations,” said Daniel Chiomba, head of the department for visually impaired pupils.

The United Methodist Church-run school does not discriminate against children without sight and currently has 12 visually impaired pupils in different grades.

“We prefer children who are at least 7 years old, as younger children cannot be independent and take care of themselves in the dormitories,” Chiomba said. All the visually impaired children at the school are boarders.

Kudzai Antonyo, 9, recently enrolled at Murewa. He is classified as “totally blind” and currently negotiates his way around the school using a white cane. The boy is still in the remedial class run by Chiomba, where he is learning to read and write in Braille.

Kudzai sits apart from the other pupils in the class for visually impaired children. “We are teaching him Braille and he uses an alphabet board and pins to write,” Chiomba said.

He instructs Kudzai to write the word “baba,” the local Shona language term for “father.” The boy painstakingly arranges pins on the board before using his fingers to read the four letters. Some pupils may take up to one year to master the Braille alphabet.

Once pupils have mastered Braille using boards, they graduate to write with a stylus on Braille paper encased in a frame. They carry their frames and styluses to all classes and “write” their final public examinations using the same equipment.

Established in September 1975 with an initial enrollment of only two pupils, the department for the visually impaired celebrated the enrolment of its 100th pupil in May.

Cresencia Rarayi, the school headmistress, said the inception of the unit was in response to demand for a school for children who are not sighted.

“The United Methodist Church is sensitive to the needs of children with various conditions. The church is unique, because in Mashonaland East province, there are three church-run schools catering for children who were shunned by the mainstream education system,” she said. 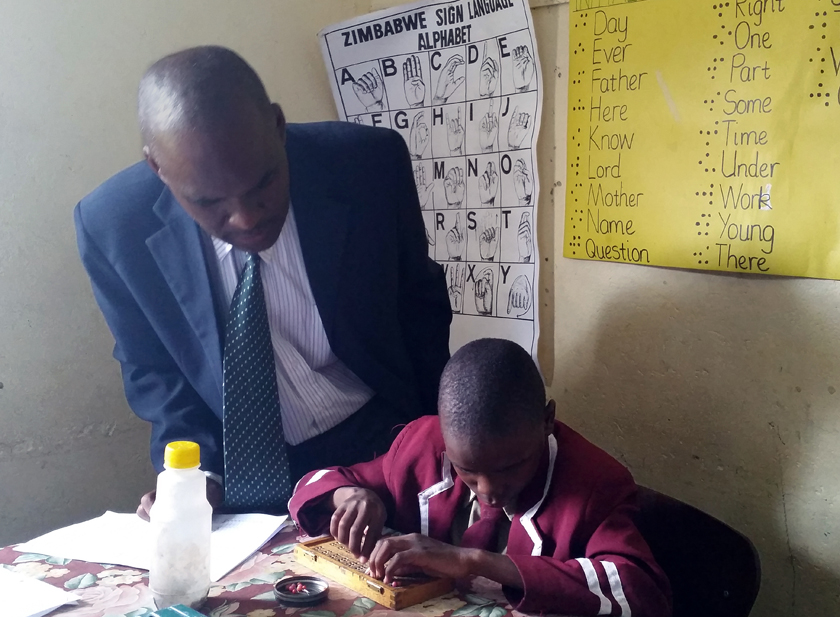 Murewa and Nyamuzuwe cater to visually impaired children while Nyadire caters to the hard of hearing, she said. Her school also has embraced mentally challenged children.

“Our denomination welcomes all children regardless of their condition. One child travels about 15 kilometers (9.3 miles) to school here daily because he is mentally challenged and we are the nearest school that has a class for children like him,” said Rarayi.

Chiomba said the department has maintained an average of between 10 to 15 pupils per year and has an impressive academic record dating back to 1999, when William Mikithayo obtained distinctions in all four subjects.

All pupils from the unit enroll at Murewa High School for their secondary school education and some have proceeded to local universities.

Two former students are currently studying at the University of Zimbabwe, another is a university graduate who is now employed by the government’s social services department in Murewa, and another is teaching advanced-level history at Murewa High School, Chiomba said.

“Since establishment, we emphasize total integration of visually impaired pupils with their sighted counterparts. Our pupils are all integrated except for beginners who will still be learning to move around the school on their own.

“Visually handicapped pupils have been accepted by their peers as equal partners. They have lots of friends who are eager to assist them when the need arises,” he said.

Kundayi Paradza teaches computers to all pupils at the school. He devotes 30 minutes every day for each of the visually handicapped children because his department only has one computer with software that enables them to hear which keys they are typing.

Armstrong Chiota, 18, is in his final year at the school and has mastered the keyboard. “I am able to type documents and listen to the computer using headphones,” he said.

“We need five more computers with the Jaws software for the visually impaired children. At the moment, there are six pupils in Grade 7, that is why I teach them individually for half an hour. They usually need about eight months to grasp key concepts,” Paradza said.

Chiomba said his department is struggling to operate with limited resources. “Braille paper is very expensive. A pack with 100 sheets costs $3 and sometimes we use a pack in one day,” he said. 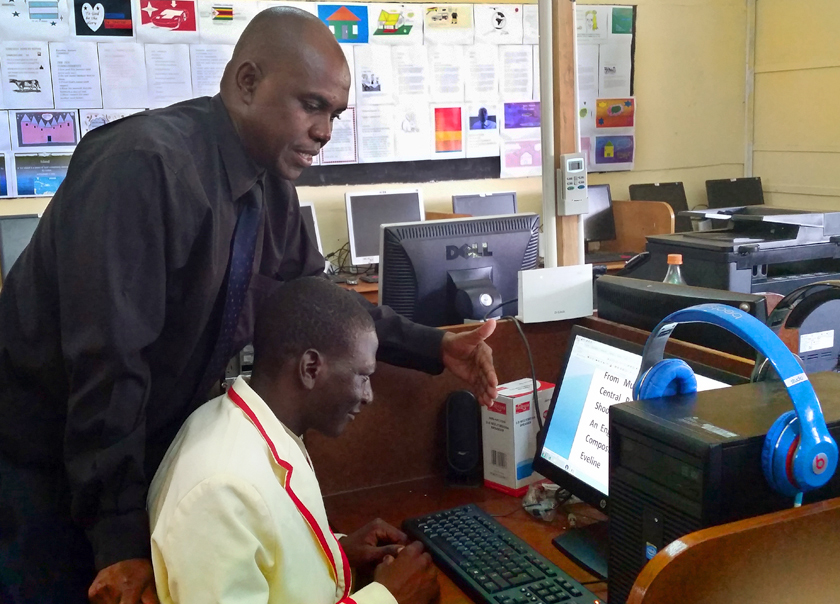 Only two of the children have paid all their school fees. One of them has her fees paid annually by a member of Community United Methodist Church in Maryland. The other 10 have arrears totaling more than $10,000.

The department for visually impaired pupils also requires Duxbury Braille transcription software and an Index basic DV3 printer. The software and printer are used for all the work done by the pupils.

In a small classroom across the courtyard, Rudo Maponde tries her best to coax one of her students to come out from under a table. She teaches six mentally challenged pupils, ages 10-20, basic life skills and some practical subjects.

“Other classes focus on academic results, but I teach these children how to look after themselves, and even how to wash small items like their socks. The children usually leave the school at 20 years and join the community because they will be self-reliant,” Maponde said.

Paul Ruze, 17, is an expert at weaving and has made cushions and mats. He also is good at construction and his teacher believes he may become an architect someday.

Though seemingly small, teaching the class is a mammoth task, she said.

“The children are sometimes very emotional and don’t want to participate, so I have to motivate them every day. You cannot give them instructions because they respond slowly and this requires a lot of patience. Every day, I pray for the strength and wisdom to manage this class,” she said.