Given the current, politically divided atmosphere, many people are calling for a return to civility. But what does it mean to have honest, respectful conversations with people with whom we disagree? What does that look like?

The United Methodist Commission on Religion and Race hopes to offer a model in a newly released study program entitled “Vital Conversations 4: Race, Culture, The Church, and Human Sexuality.”

The General Commission on Religion and Race videos and accompanying materials may be downloaded online at no charge. Printed study guides may also be ordered in bulk for a postage-and-handling fee.
The program features short videos of theologians, pastors, worship leaders, lay leaders, Biblical scholars and community activists — many of them people of color — discussing the Christian church’s stance on human sexuality.

“Oftentimes, people of color are reluctant to engage in the discussion around sexuality outside of their own communities,” said Erin M. Hawkins, the commission’s top executive. “It’s important to hear these voices that we haven’t traditionally heard, and it’s important to show what a civil conversation looks like and that people are already doing it.”

Designed for use by small groups in congregations, campus ministries and church leadership teams, each video segment presents a 10- to 12-minute conversation between two people. Each pair has some relationship — they’re friends, classmates, or colleagues — but they also have differing perspectives in the ongoing debate over the status, role and rights of people who are lesbian, gay, bisexual, transgender and queer or questioning in the church. 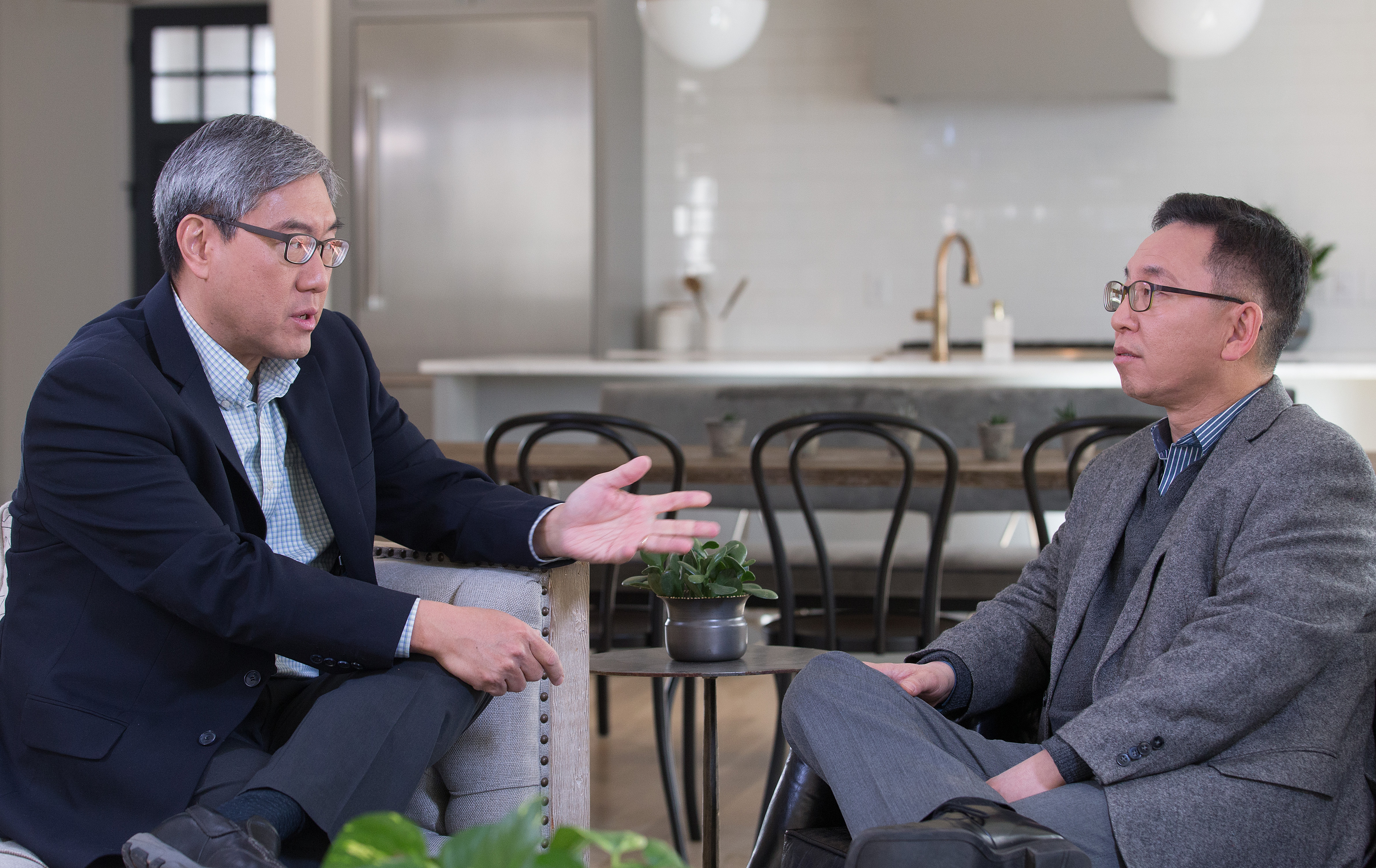 The Revs. Kevin Park (left) and Kil Jae Park share a conversation on offering pastoral care when congregants have differing views, part of the newest GCORR Vital Conversations series. Photo by Mike DuBose, UMNS.
The video programs are offered in advance of a special 2019 General Conference, which will meet Feb. 23-26 in St. Louis, in an effort to resolve the denomination’s decades-long debate on homosexuality. The conference will consider a report from the Way Forward Commission, a group appointed by the Council of Bishops to find a way the church can remain unified amid differences over whether LGBTQ members may be ordained as clergy, whether clergy may marry same-sex couples and whether homosexuality is “incompatible with Christian teaching.”

Session 1 is a conversation between the Rev. Irving Cotto and Jorge Lockward on “Honoring Personal Integrity in the Midst of Community.” Cotto, senior pastor of St. Paul United Methodist Church in Warrington, Pennsylvania, holds a traditional view relating to LGBTQ persons. Lockward, minister of worship arts at The Church of the Village in New York City, is an openly gay Afro-Latino man. At times during the exchange, their voices break with emotion.

“You’re a Latino brother and you are my friend,” Lockward tells Cotto on the video. “I see the Spirit in you … and yet at the same time, the positions that you hold, I see them causing great harm. That became a huge conundrum for me, and that’s really where I’m struggling.”

Cotto responds that when he sees Lockwood leading worship “the Spirit is very obvious in you," adding, "We disagree, and yet we have each other’s friendship. I hope the church can find a place where we say, ‘Look, we have each other.’ We are brothers and sisters at the table of the Lord.”

Lockward tells Cotto that they don’t want to hurt each other.

“Deep inside, we don’t want to hurt each other, and yet the journey itself requires us to say difficult things to each other, which cause hurt even when we don’t intend to cause hurt,” he said.

Session 6 is a conversation on “Values, Laws, Marriage, and the Bible” between the Rev. Joy J. Moore and Bonnie Wheeler. Moore is associate professor at Wesley Seminary at Indiana Wesleyan University and an ordained elder in the West Michigan Conference, while Wheeler is a counselor with the Michigan State University Counseling Center. Moore, who is African-American, leans toward a more conservative perspective than Wheeler, who is Anglo.

The two have been friends since college.

“I’m willing to give a hearing simply because I respect you and I’ve learned so much from you, rather than needing to tell you what I think, because it sounds like you were wrong,” Moore tells Wheeler in the video, leading both women to laugh. “I’ll listen because I might be the one who is wrong.”

“Or, it might just be different,” Wheeler responded. “People get so bound up in defending their positions that they don’t hear what the other person says.”

Hawkins noted that people in communities of color often trend toward a more conservative perspective, but viewpoints are far from monolithic. She hopes the videos will promote a better understanding of some of the racial, ethnic and cultural dimensions that inform those views.

“Historical oppression is something that is still being dealt with in communities of color,” she said. “With slavery or colonialism, there were experiences of sexual harm and oppression, and that trauma is something that folks are still grappling with today.”

Garlinda Burton, director of Resource Development for the commission, said the voices of people of color are often absent or stereotyped in discussions about human sexuality.

“We think it’s important to bring these voices to the forefront, to enrich our conversation,” she said. 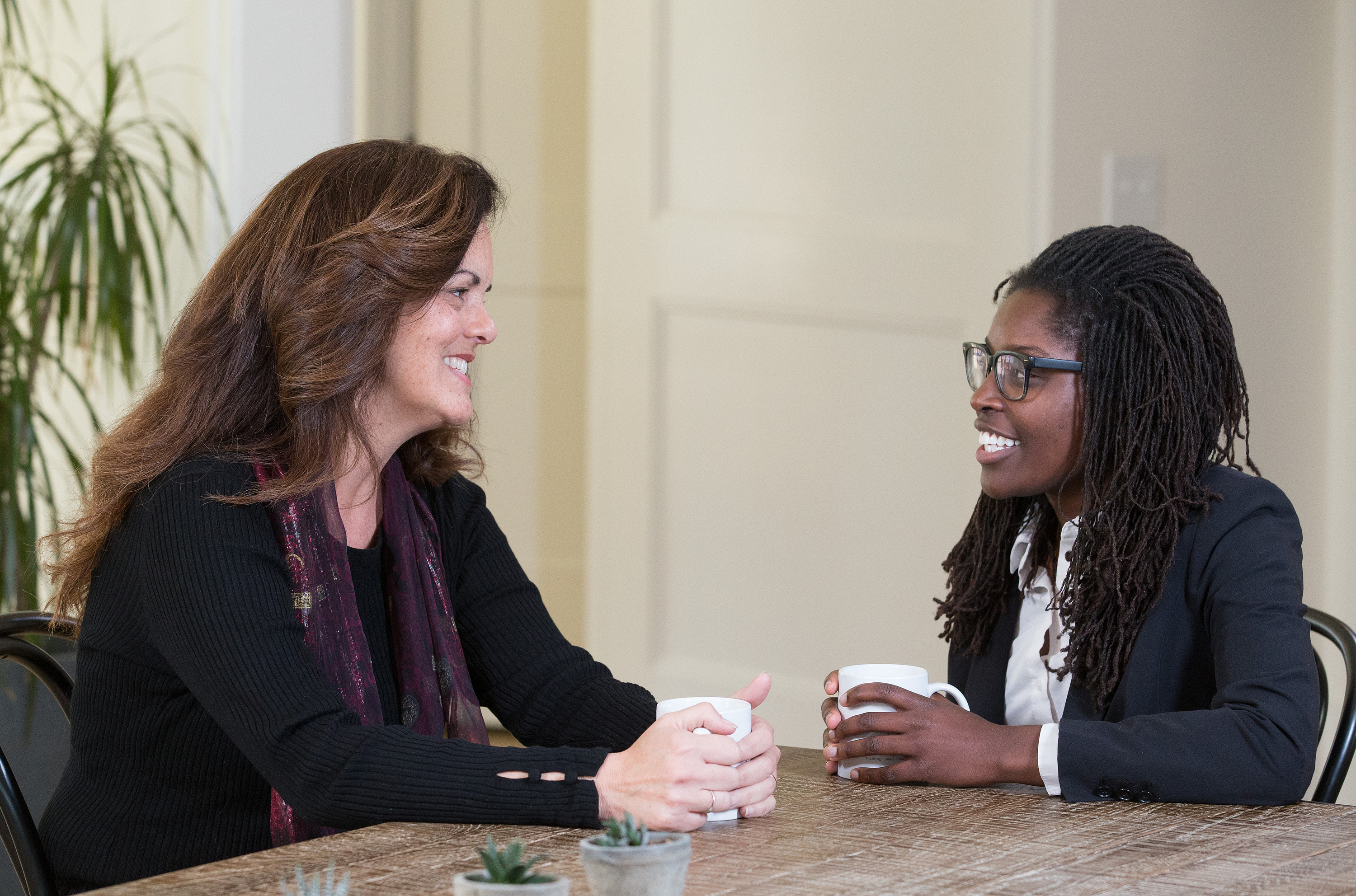 The Revs. Debbie Dow Weatherspoon (left) and Annanda Barclay discuss intersections of identity and oppression in the church as part of the GCORR video series. Photo by Mike DuBose, UMNS.
Sessions 1-6 are available now and sessions 7-11 will be available January 2019.

In addition to the six video segments, the course includes study leaders’ notes, study guides, a list of resources for additional reading and a glossary. The series also provides sermon ideas and worship suggestions for preachers, as well as an intercultural “primer” that introduces insights into beliefs, practices, communications styles, values, social interactions, traditions and norms of communities of color in the U.S. as well as Africans, Filipinos and other historically marginalized groups.

“We have responsibility to let our Christianity speak to us in how we relate to people,” Burton said. “We hope these videos will encourage people to have conversations about tough issues related to race and culture — how they affect our church in the world, and how we can live together as Christians, even if we don’t yet agree on this.”

As United Methodist bishop, he led conferences in the U.S. Northeast, including carrying out a long-sought merger. He also helped establish Africa University.
Mission and Ministry

United Methodist front-line workers and church leaders in the Philippines share survival stories after contracting the coronavirus, with most relying on faith to overcome fear and isolation.
Mission and Ministry

A new children’s book tells the story of Methodist minister Charles A. Tindley, who worked his way up from childhood poverty to become a respected clergyman and hymn songwriter.