The full ramifications of the U.S. Supreme Court's rulings Wednesday, June 26, on same-sex marriage are still being hashed out. But the rulings already are winning praise from some United Methodists even as they trouble others.

On one thing many United Methodists agree: The decisions will likely add fuel to a longtime denominational debate on how the church ministers to gays and lesbians.

"Today's legal decisions by the Supreme Court will undoubtedly increase the call for change from a vocal and sizeable segment of our church membership, and clergy, that find our official policy unjust. As pastors and congregations in California, and other places where same sex marriage is legal, we must decide how we will provide pastoral care and support for parishioners and their families when they seek to marry," said San Francisco Area Bishop Warner H. Brown Jr., who oversees the California-Nevada Annual (regional) Conference in a statement released late June 26. "Under our current rules, I must encourage pastors to reach out to their ecumenical partners, so that pastors and churches that are permitted under their polity to offer marriage to same sex couples be invited to assist in providing pastoral care."

The Rev. Glen Raley, pastor of First United Methodist Church in Marysville, Calif., knows that many of his fellow United Methodists in the California-Nevada Annual (regional) Conference will celebrate the court's rulings. But he is not one of them.

"I believe it goes against Scripture, and it goes against the church as a whole," he said. "All it does is create loopholes. No matter what (church law in) the Book of Discipline says, we now have a loophole."

However, the Rev. Scott Campbell, pastor of Harvard-Epworth United Methodist Church in Cambridge, Mass., and a Harvard University chaplain, says June 26 "should be a day of rejoicing across the church that our Supreme Court has upheld the values that the church cherishes - it is a matter of simple justice for all people."

The Rev. Karen Booth, a United Methodist elder and director of Transforming Congregations, said the rulings "will present a challenge to moral traditionalists because so many Americans are influenced by what the government does and how the media interprets it."

Booth noted that The United Methodist Church teaches that government laws are not sufficient to inform Christian conscience and called on United Methodists "to maintain a winsome and countercultural witness for sanctified sexuality and traditional marriage."

Susan Laurie, a parish coordinator for First United Methodist Church in Park Ridge, Ill., and a lesbian who has long advocated changing the church's stance, viewed the Supreme Court's rulings with mixed emotions.

What this means for the church 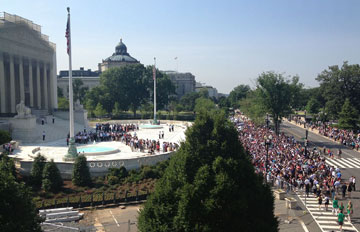 Crowds gather outside the Supreme Court building in Washington to hear decisions on DOMA and California's Proposition 8. A web-only photo by Michelle Whittaker of the United Methodist of the General Board of Church and Society.

Ahead of the rulings this week, Indiana Area Bishop Mike Coyner published an "E-pistle" calling on United Methodists to respond to the rulings with "prayer, patience and respect for one another."

What the rulings do not change, Coyner and others noted, is The United Methodist Church's definition of marriage.

The Book of Discipline, the global denomination's law book, affirms "the sanctity of the marriage covenant that is expressed in love, mutual support, personal commitment, and shared fidelity between a man and a woman."

Since 1972, the book has stated that all people are of sacred worth, but "the practice of homosexuality is incompatible with Christian teaching."

The Book of Discipline also says, "Certain basic human rights and civil liberties are due to all persons" and commits the church to supporting "those rights and liberties for all persons regardless of sexual orientation."

The Judicial Council, the denomination's top court, ruled in 2009 that it is a chargeable offense for United Methodist clergy to perform ceremonies celebrating same-sex unions, even in states where they are legal. Campbell, who represented the Rev. Amy DeLong, who was convicted in a church trial of officiating at a same-sex union, said he hopes the U.S. Supreme Court's rulings "will spur The United Methodist Church to finally eliminate the inconsistency in its own fractured approach to human sexuality."

"The Supreme Court has made it clear that the Constitution will not permit us to grant dignity in one place and take it away in another. It is time for the church to follow suit."

Booth said the denomination for 40 years has "maintained clear and consistent teaching and policy in support of traditional sexual morality and marriage." She does not expect that to change.

However, in recent years, some United Methodist clergy increasingly have expressed a willingness to commit "ecclesial disobedience."

Since 2011, more than 1,000 active and retired United Methodist clergy across the United States have signed pledges announcing their willingness to defy the denomination's ban on officiating at same-sex unions.

The pledges, in turn, sparked a countermovement by other United Methodist clergy and lay people urging the Council of Bishops to make clear that they will enforce the Book of Discipline on this issue. More than 2,800 clergy and nearly 13,500 laity signed those petitions.

The United Methodist Church has more than 46,000 active and retired clergy in the United States.

What the U.S. Supreme Court did

In the case Windsor v. United States, a 5-4 majority opinion by Justice Anthony Kennedy ruled Section 3 of the federal Defense of Marriage Act is unconstitutional, arguing that it is a deprivation of the equal liberty of persons as protected by the Fifth Amendment.

"DOMA singles out a class of persons deemed by a State entitled to recognition and protection to enhance their own liberty," Kennedy wrote.

The case does not establish a constitutional right to same-sex marriage. What it does is establish that same-sex couples who are legally married are entitled to equal treatment under federal law. These couples now will be able to receive the same federal benefits, with regard to such matters as income taxes and Social Security, that the U.S. government grants to other married couples.

The court did not address whether states that ban same-sex marriage must recognize such marriages that take place in other states.

In the case Hollingsworth v. Perry, the 5-4 majority opinion by Chief Justice John Roberts ruled that proponents of California's Proposition 8, which banned same-sex marriage in the state, did not have standing to defend the law on appeal after it was struck down in federal district court. California government officials who normally would have defended the law in court declined to do so.

As a result, the Supreme Court held that the decision by the U.S. Court of Appeals for the Ninth Circuit has no legal force. It sent the case back to that court with instructions for it to dismiss the appeal. The ruling clears the way for same-sex marriage in California.

Bishops responded in a letter released Nov. 11, 2011, promising to uphold church law banning same-sex unions. Some bishops have received complaints since this statement, but not one of those complaints has progressed to a public church trial at this point. Under church law, investigations of clergy under complaint are usually confidential.

Church members have also increasingly become more vocal in their disagreement on the issue.

Delegates to the Western Jurisdiction's meeting in 2012 adopted a "Statement of Gospel Obedience" that says the denomination is in error in its stance on the practice of homosexuality and urged United Methodists to operate as if that position does not exist. A number of United Methodists criticized the Western Jurisdiction's stance, including Indiana's Bishop Coyner.

Retired Bishop Melvin Talbert, who formerly led the California-Nevada Conference, has been an outspoken advocate for clergy officiating at same-sex unions. He calls the movement "biblical obedience."

He hopes the rulings will encourage clergy to officiate at same-sex weddings in states where they are legal. He acknowledged that clergy who do perform such weddings risk a church trial and losing their credentials as United Methodist pastors.

"What I say to clergy is that in the same way that we called on people in the 1960s to not allow Jim Crow laws to continue segregating people, we should not allow these laws (in the Book of Discipline) to prevent us from doing the right thing. And of course some of us had to go to jail because the law was the law," said Talbert, a veteran of the U.S. civil rights movement who spent time behind bars with the Rev. Martin Luther King Jr.

The Rev. Joy J. Moore, a United Methodist elder and associate dean of African American Studies at Fuller Theological Seminary in Pasadena, Calif., takes issue with the comparison that "sacred disobedience is the same as civil disobedience."

"To resist injustice and hypocrisy in our nation requires a community that practices justice and integrity," she said. "I have not been convinced that breaking the rules of the church is the best way forward. To put this another way, because of the church,governmental injustice is to be resisted. Citizenship in a democracy means diversity of ideas, equally protected and exercised. However, the church should demonstrate a clarity of ideals, practiced with honesty and integrity. I do not believe violating the Book of Discipline to be helpful here. Instead, we must firstcontinue toexposeour hypocrisy while working on language that speaks with clarity to such ideals as marriage, family andfidelity - not to mention justice, kindness and a witness to the God made known in Jesus Christ."

No one has an exact tally, but at least some clergy already have acted on their pledge to officiate at same-sex weddings. The Rev. Thomas Ogletree, a United Methodist theologian and retired elder, announced this spring that he is facing formal charges under church law and a potential trial for officiating at the same-sex wedding of his son.

Reconciling Ministries Network plans to provide space for same-sex weddings during its national convocation Aug. 30Sept. 2 in Maryland. The space is for couples "whofeel called, but live in states where they cannot legally marry or are part of churches that will not affirm their relationship," the group's press release said.

Mary Ann Kaiser, a United Methodist whose efforts to become a deacon are under review, already has announced plans to wed her partner, Annanda Barclay, during the gathering.

Shifting views in U.S. but not global church

Many longtime church observers predict the church's position will not change anytime soon, particularly since the denomination's membership is growing in Africa and Asia as it is shrinking in the United States. That means African and Asian representation will increase at General Conference as U.S. representation decreases.

But U.S. public opinion on the subject is changing. Polls for the past year have shown a slim majority of Americans favor allowing gay and lesbian couples to marry legally.

At present, 12 U.S. states and the District of Columbia have made same-sex civil marriage legal - three states just did so this year. Thirty-six states, including California, have constitutional provisions or state laws defining marriage as between a man and a woman.

Globally, 15 nations now allow same-sex marriage as well as parts of Mexico. Of those countries, most are in Europe, three are in South America and only one, South Africa, is in Africa.