Africa University is open and operating smoothly despite political unrest in Zimbabwe, but some students have been unable to register for financial reasons resulting from widespread economic difficulties in southern Africa, the vice chancellor reported.

“We are confident students are safe,” Munashe Furusa told the Advisory Development Committee on Sept. 10. The development committee works on fundraising and development for the institution, which will celebrate its 25th anniversary in 2017.

Most of the protests have been in Harare, several hours from the campus in Mutare. “There are concerns. We pay attention to our local political environment,” Furusa said.

A declining economy sparked the wave of protests in Zimbabwe, which like neighboring Malawi is  suffering from drought. And economic problems in Angola and Nigeria due to loss of oil revenue mean students and their families are struggling.

The vice chancellor said 1,164 fulltime students have registered, but as of Sept. 10 about 170 students are unable to get funds for tuition. And the university is working with the others to secure scholarship funds and work out payment plans to keep the students in class.

In the face of potential declines in enrollment and revenue from tuition, the university has increased the teaching load of faculty from nine to 12 hours per semester and eliminated performance bonuses for 2016-2017. A teaching load of nine hours is considered ideal for a research university, since that allows faculty time to research and publish, Furusa said.

A student recruitment task force was appointed and a plan is underway for online education beginning in January 2017, Furusa reported. He said AU hired an expert in online education and is collaborating with the United Methodist General Council on Finance and Administration and the Board of Higher Education and Ministry and California State University, Dominguez Hills. Furusa was on staff at the California school before returning to Zimbabwe.

In addition, the Zimbabwean government is considering the commercialization of two AU research projects — a rapid dipstick malaria test and an intellectual property framework, Furusa said. Commercialization would provide another revenue source, he said.

Africa University was re-accredited in April by the Zimbabwe Council for Higher Education and the council also approved a proposed Ph.D. in Peace, Leadership and Governance, the first doctoral program approved for the university. Two years ago, there were concerns about the number of Ph.D.’s teaching in some programs, but Furusa said the university got high marks and is re-accredited for five years.

Efforts underway to connect with more than 7,200 alumni—92 percent stay in Africa—are aimed at finding fieldwork opportunities for students, as well as jobs when they graduate. In addition, officials hope helping alumni connect with each other through an alumni database will foster partnerships in research and other areas that may benefit Africa.

Some of the seven faculties, the equivalent of a school or college at a university in the U.S., have too few students and a proposed restructuring would bring all the faculties into three colleges, which Furusa said would increase efficiency.

‘Heart and soul is the church’

Several committee members questioned why the Faculty of Theology had just 61 students.

“The heart and soul of Africa University is the church,” said Israel Kamudzandu, an AU graduate who is an associate professor at Saint Paul School of Theology in Kansas. “We should not forget where we came from. We came from a dream that came from God.” 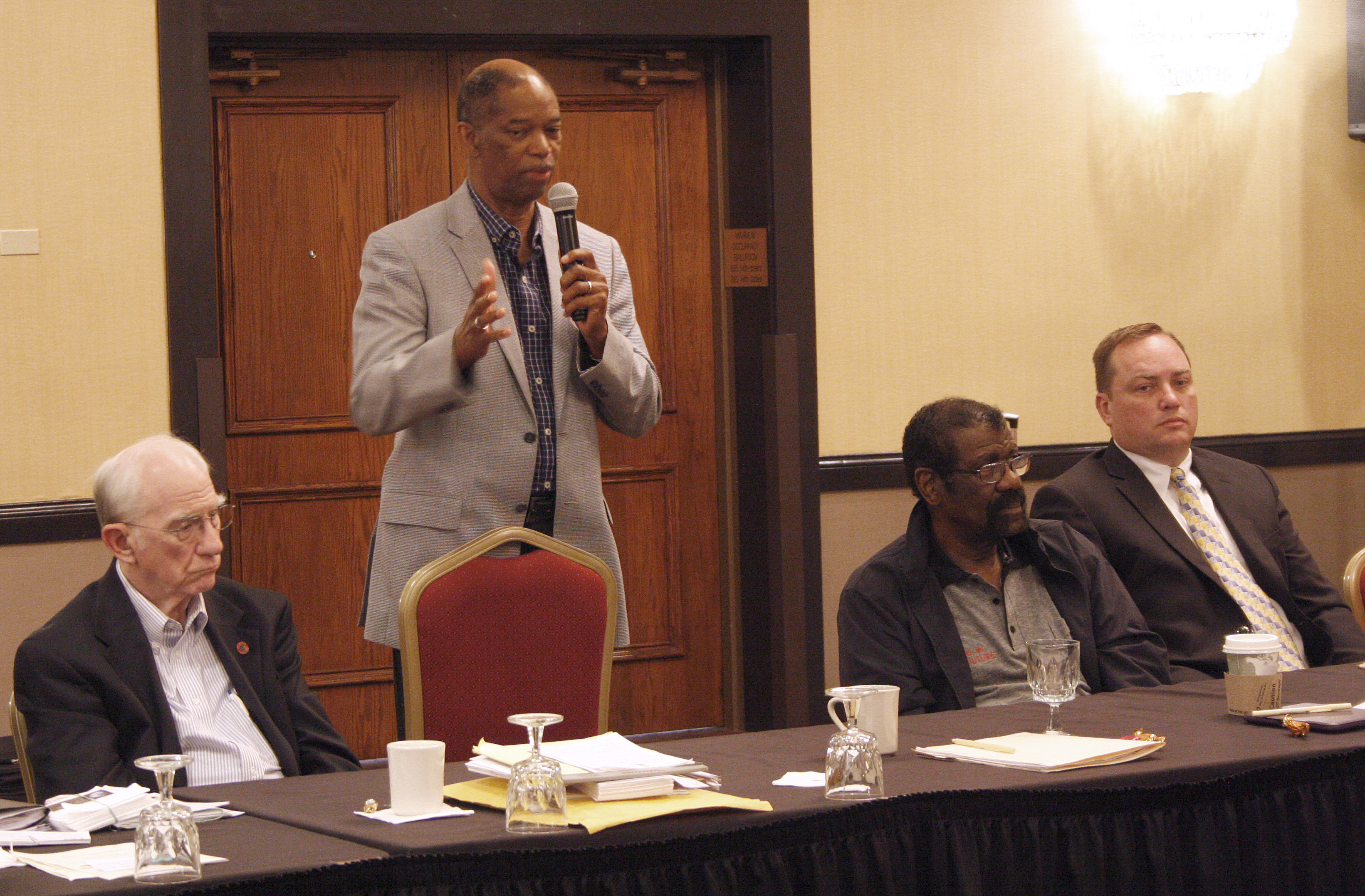 A proposal for reorganizing Africa University for efficiency was discussed by the Advisory Development Committee on Sept. 10. The Rev. Henry L. Masters Sr. speaks to the committee. about the plan. Photo by Vicki Brown, UMNS.

Bishop David Yemba, university chancellor, said there are schools of theology or pastor training programs in most episcopal areas in Africa. He said the cost in airfare and other expenses to get a single Congolese student to Africa University is enough to pay for four students to study in the Democratic Republic of the Congo.

Those theology schools and training programs need instructors, though, and Yemba said one solution might be for Africa University’s theology program to become a graduate studies program that would provide needed instructors and professors.

Furusa said each United Methodist episcopal area gets scholarships for four students and that more and more, those students say they are more effective if they study agriculture or some other program rather than theology.

Caroline W. Njuki, a committee member from Uganda who works with a nonprofit, said the days of a pastor being paid are almost gone. “The pastor needs to have some additional skills not only for himself but also to empower community,” she said.

The Rev. Mande Muyombo, an AU graduate and executive with the United Methodist Board of Global Ministries, suggested the university consider a task force on the future of the Faculty of Theology. He noted that there is great need for training on working in multi-religious settings and dealing with religious intolerance.

Board members raised concerns in 2015 about aging and overcrowded dorms and Furusa said floor tiles and furniture have been replaced in existing dorms. Three new dorms are planned and those will use solar energy to reduce costs, the vice chancellor said.

The farm and the dining hall staff are now working together, improving the quality of dining hall food with farm products, Furusa said.

Brown is news editor for United Methodist News Service. Contact her at [email protected] or 615-742-5470.