“My heart is bleeding, seeing Lumad farmers being deprived of rice,” Davao Area Bishop Ciriaco Francisco said, referring to an indigenous people who have suffered genocide and human rights violations. He spoke during a service of reflection on April 1­­7.

Meanwhile, a fact-finding team from the California-Nevada Conference reported on the devastation faced by farmers and Lumads and called on the government to act now.

The April 17 service, titled “UMC: Sanctuary Amidst Crisis,” offered theological perspective on the church’s role in sheltering protesting farmers in the city of Kidapawan.

The farmers’ protest — a demand for rice as El Niño-related drought drags on — turned deadly on April 1. Three people were killed and others wounded when police opened fire, according to news reports.

The United Methodist compound in Kidapawan harbored about 4,000 protesters, sparking tension with authorities.

The farmers who escaped arrest have gone home, and those detained by police have been freed. United Methodists testified at Senate hearings on the April 1 shooting deaths in Kidapawan. 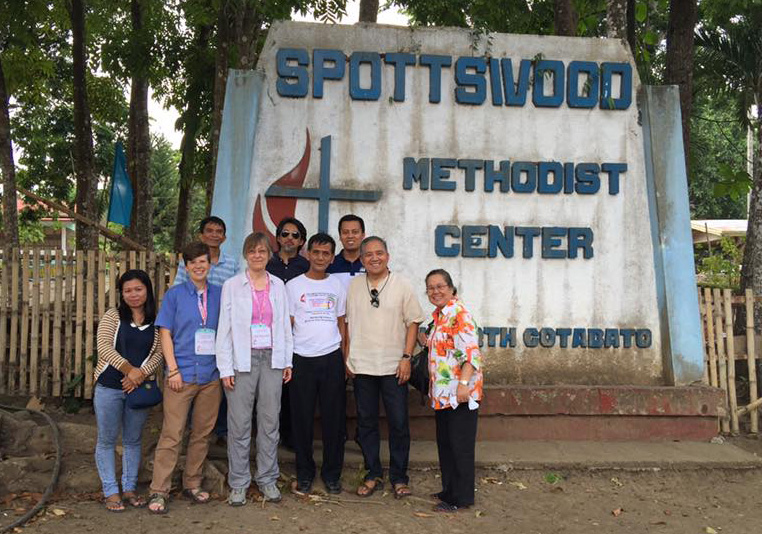 Members of the fact-finding team from the California-Nevada Conference and others at the Spottswood Methodist Center where farmers and Lumads sheltered after a protest turned violent. Photo courtesy of Gladys Mangiduyos.

At the April 17 service in Quezon City, Bishop Francisco emphasized that the church’s role is to lead God’s people from despair to hope and from slavery to freedom.

He also stressed that the Davao Area in the Philippines has, by helping the farmers, engaged in risk-taking mission work.

“Are you willing to take the risk?” he asked his audience. “Would you be willing to spread scriptural holiness?”

The conference Board of Church and Society brought a farmer and the Davao area chancellor to the service, too.

Arlene Amar testified about the drought destroying her crops.

“We can survive not eating thrice a day, but we will never ever allow that our kids starve,” Amar said. “We just tell them, ‘Let us just wait and we will have rice soon.’ ”

“They insisted not to go home if they do not have rice, it turned out to be violent because the farmers resisted and police opened fire.”

During a recent Senate hearing in Davao City, Francisco decried the tight security authorities placed against the Spottswood compound and said the church has a long tradition of providing sanctuary to those in need.

“What we have done as The United Methodist Church is to be true to that commitment — being faithful to care for the people, the poor, the needy, and those who are in need of a place for refuge,” he said.

Bishop Francisco testified police blocked church members from entering or leaving the church, ordering them to sign a logbook. And, he said, they held up food donations.

In other developments, a group from the California-Nevada Conference was in Kidapawan to conduct a fact-finding mission April 22-24. They held a press forum at the Bishop La Verne Mercado Ecumenical Center of the National Council of Churches to report their findings.

The team interviewed protestors and farmers who participated in the Kidapawan protest rally. They called on the government to drop the charges against those arrested and to provide relief to those facing food shortages.

“We call for an independent investigation into the response of the Philippines National Police and SWAT teams on April 1. We have reason to believe that the violent dispersal was not the result of independent police members’ actions. More inquiry is needed, and due to conflict of interest, this inquiry must come from outside of the government,” the team said.

The group joined Filipino United Methodists in calling on churches and people of faith and goodwill to be in solidarity with the farmers.

“We witnessed first-hand the realities of the drought. We saw fields that have turned yellow and brown, as well as rice paddies that are completely dry. We do not presume to know how disastrous an experience this is for ordinary farmers,” the team reported.

The team added that while it was predicted months ago that El Niño would cause a drought, “the government apparently took no preventative actions to mitigate the effects.”

“We find the farmers to be justified in their demands for rice. In the face of starvation, we do not know what other choice people have. During the two months prior to the Kidapawan protest, the people demanded release of Calamity Aid promised by the government with no results: We affirm the people’s right to organize mass action,” the team said.

The Lumads, of the southern Philippines, have been caught in combat between government soldiers and paramilitary rebels. There have been reports of the displacement of entire Lumad communities.

United Methodists have spoken out against the treatment of the Lumads.

Mangiduyos is a correspondent for United Methodist News Service. Contact her at (615) 742-5470 or [email protected].

Controversy embroiled the Florida Conference as its clergy session narrowly voted not to approve for advancement on the clergy track a slate of 16 persons, some openly gay.
Judicial Council

As U.S. annual conference season gets underway, the regional church bodies are dealing with decisions by The United Methodist Church’s top court about disaffiliations.
Judicial Council

The United Methodist Church’s top court ruled that current church law does not allow annual conferences in the U.S. to withdraw from the denomination.