More than a thousand United Methodists of the Angola West Conference mobilized recently in Luanda, the capital, for a massive cleanup campaign throughout the city.

“Methodists are called to do good to everyone and at all times,” he said. “We cannot live with the garbage that surrounds us, so as not to feel like garbage, too.”

The waste-collection crisis in Luanda intensified in December when the Provincial Government of Luanda suspended contracts with the companies that performed the service. The Afrik 21 website reported that, on March 30, the government signed contracts with seven local cleaning and waste-collection companies. Six of the seven had lost their licenses following suspension of public procurement.

According to a government website, Joana Lina, the governor of the province of Luanda, confirmed that the contracted companies are already operating.

“The big question that arises is that, as the waste collection was not carried out with the necessary regularity, there was an accumulation in the municipalities, some more than others,” she said. Throughout the rainy season, soaked garbage continued to accumulate.

In response, volunteers were called to assist with cleanup. The Provincial Government of Luanda provided technical and human resources.

“United Methodists here in Luanda are called to do good,” said Lina, who participated in the effort. “On behalf of the government of Luanda, I thank The United Methodist Church and, in particular, the person of the honorable Bishop Domingos, for this wonderful work.”

United Methodists, Domingos noted, view the campaign as part of their social, civil and civic responsibility.

“Beloved, only those who are used to living with garbage do not feel uncomfortable with the conditions in which the city of Luanda is today,” he said. “The city cries out for you and for all of us; she needs the support of Methodists.”

Youth and adult United Methodists gathered to help, even in the face of social isolation imposed by COVID-19. Church members mobilized other residents along the main streets. Domingos and Lina opened the workday with brooms in their hands.

“During all this time, even though I didn't see you,” Lina said, “I felt your support and warmth.”

Calling it her “hymn of inspiration in times of sadness,” she said, “You do not even imagine the trials and challenges that I have been through these last days. Your gesture is commendable for me and my work team.” 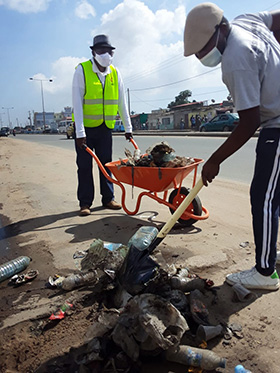 The Rev. Bernardo Neto (left) and Mauro de Oliveira remove garbage from a street in Cazenga, Angola. Neto is superintendent of The United Methodist Church’s Luanda District. Photo by Augusto Bento, UM News.
The Rev. Bernardo Neto, Luanda District superintendent, monitored distribution of wheelbarrows, shovels, hoes and brooms to the brigades scattered on the main roads in the municipalities of Luanda, Cacuaco and Viana, where the journey ended.

“This campaign is part of the social action that each United Methodist must do,” Neto said. With about 350,000 members, Luanda is the conference’s largest district.

“The participation of each United Methodist,” he added, “demonstrates respect for the fulfillment of the orders of our leader. We need to safeguard life, the most precious asset.”

Nazaré Mavinga, a member of Galilee Chapel in the municipality of Cazenga, noted that she and other women “are ready and prepared to support our city, which needs us a lot.”

Maria Manuela, conference health director, said, “This gesture contributes to the reduction of water-borne diseases in this rainy season and serves to combat the COVID-19 pandemic. It is important to maintain hygiene everywhere.”

United Methodists receive and share Jesus' promise of abundant life even and especially in the face and aftermath of death.
Global Health

United Methodists worldwide seek to bring abundant life to people at every stage through the hands-on ministries we support and the advocacy we do. Seven-part series explores ways the church helps others experience the abundance of life Jesus promises.