Under a short stairwell, huddled next to a concrete wall, a group of people sought shelter from the whipping, whistling wind at the base of the Matamoros Bridge.

Taking cover from the wind was Isabel who sat on a blanket holding her 16-month-old daughter, Kassandra. The little girl’s big brown eyes looked glazed and tired. The pair had traveled from Nicaragua to the Mexico U.S. border only to be stopped and given a number that places them in a long line waiting to request asylum.

Cindy Johnson, a United Methodist deaconess, comes to the bridge most days to talk to people camped out there as they wait for their turn to cross. Getting past Mexican authorities is the first step of the long process of seeking asylum.

Johnson sees the baby is not feeling well. 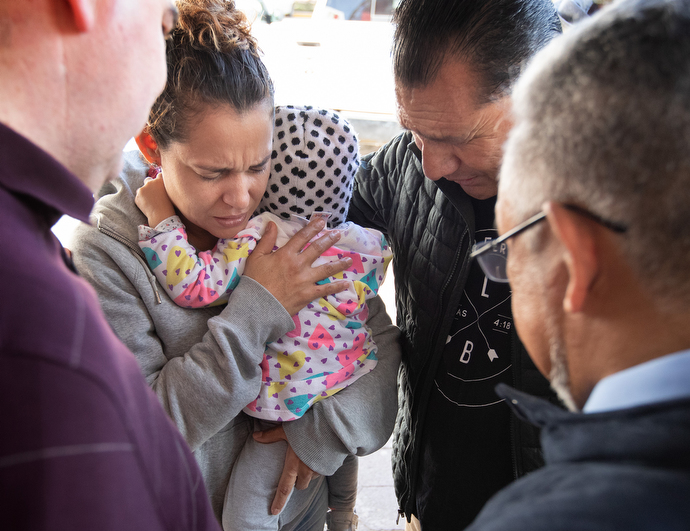 The Rev. Arturo Gonzélez Sandouzl (second from right) and other members of the United Methodist Immigration Task Force pray with Isabél and her 16-month-old daughter Kassandra at a makeshift camp near the bridge leading to the U.S. in Matamoros, Mexico. The mother and daughter traveled from Nicaragua in hopes of seeking asylum in the U.S. Photo by Mike DuBose, UMNS.

After counting how many people are waiting at the bridge on this day, Johnson and her husband, Mike, order beans and rice from a nearby street vendor. She brings the food back to the group for lunch, something the Johnsons do frequently.

“I like to bring them something hot,” Johnson said. She is worried about the baby and later that day she finds a shelter that will take the mother and child for one night. 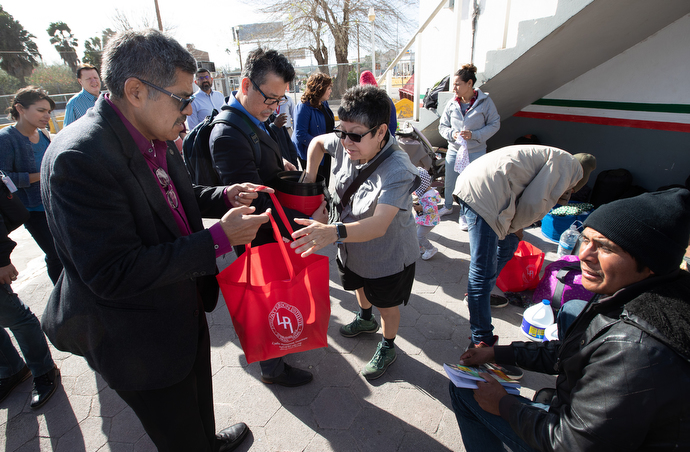 “As you may know, seeking asylum anywhere in U.S. is a legal right whether you come in a legal port of entry or you climb over the wall. Asylum law states if you are fleeing and in fear for your life, all you have to do is step one foot in U.S.” Patiño Houle explains.

Zero tolerance has made stepping one foot into the U.S. almost impossible, she said.

As thousands of migrants started reaching the border last year, so many people were lining up that Mexican authorities cleared the bridge. An unofficial checkpoint was established in the middle of the bridge manned by U.S. Customs and Border Protection.

If you don’t have the right documents, you can’t get past the checkpoint, and you can’t seek asylum, she said.

“Now what is happening is you can’t even get on the bridge in some cases without showing your documents. You are also threatened with deportation before you can get on the bridge because you cannot legally be in Mexico unless you have a visa.

“But who is thinking about getting a visa for Mexico when they are fleeing Guatemala seeking asylum?” she asked. 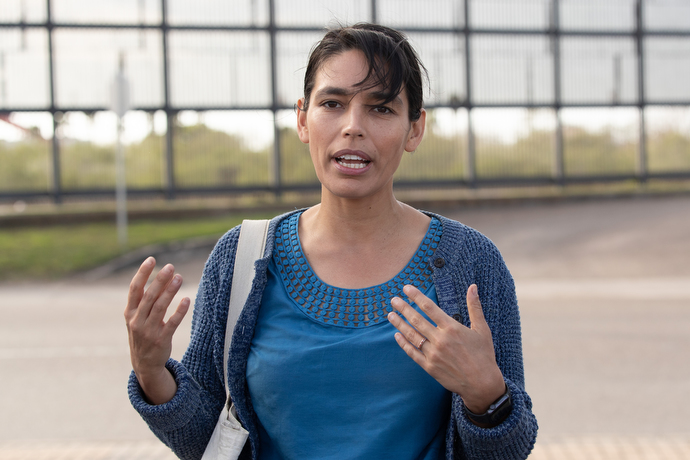 Christina Patiño Houle of the Rio Grande Equal Voice Network helps orient members of the United Methodist Immigration Task Force to the process involved with seeking asylum in the U.S. during a trip to the border between Brownsville, Texas, and Matamoros, Mexico. Photo by Mike DuBose, UMNS.

People get their names put on a list in the order they arrive. Patiño Houle said each bridge has a different ad hoc process for managing the asylum line. Some people have numbers written on their arms, some are handed pieces of paper with numbers on them.

At some points of entry, people can “pay” their way forward by offering bribes to Mexican authorities.

Authorities are also chasing people away from the encampments that form at the base of the bridge, which leaves people scattered along the border.

The trip to Brownsville to visit the bridge was part of an all-day trip for the United Methodist Immigration Task Force members meeting in McAllen, Texas.

La Posada Providencia was founded and sponsored by the Sisters of Divine Providence. Sister Zita Telkamp, director of the center, welcomed the task force team.

“Of all the churches, you (United Methodists) win the prize,” she said, praising the support the center receives from the church.

The Rev. Roberto Lopez, El Valle District superintendent, hosted a dinner the night before the day trip. Immigration task force members had conversations with local United Methodists about the work going on in the community with migrants.

“What we have seen in this past year is this incredible surge of misdemeanor cases. Now there are people being prosecuted for coming into the river (crossing illegally).” 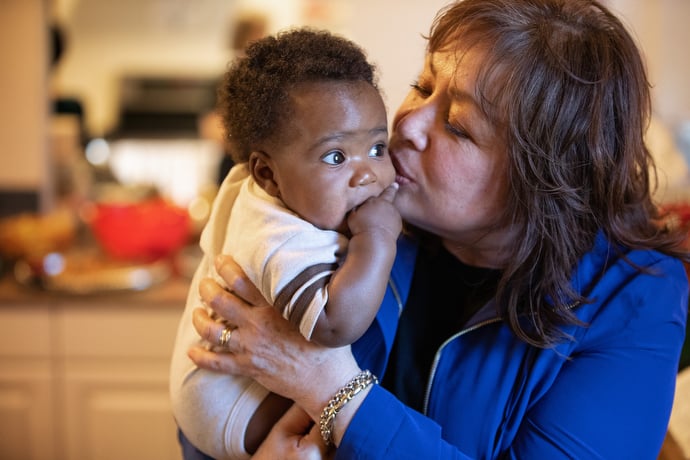 People still get their credible fear interview, she said, but now they have a criminal record.

“And I need you to know it is still happening,” she said. “Every day we still have people telling us they were separated from children.”

She told the story of a father traveling with three of his children who received a 20-day sentence because of a past conviction.

“The court told him that his children were already at a center in the Bronx, New York,” she said. 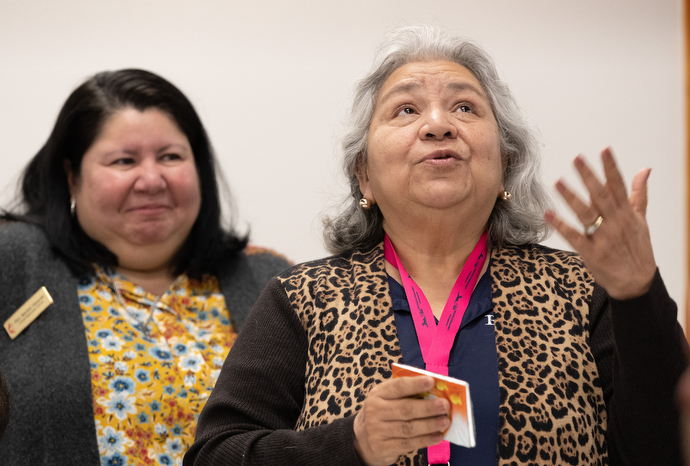 Kiko Villarreal (right) tells members of the United Methodist Immigration Task Force, meeting in McAllen, Texas, about the ordeal she endured when her husband, who had lived in the U.S. for almost 50 years, was arrested after an old DUI conviction came to light during a brief trip to Mexico. Despite having paid the fine and fulfilled the terms of the criminal penalty, he was detained for three months. With her is her pastor, the Rev. Maribel Vazquez. Photo by Mike DuBose, UMNS.

Aleman-Bendiks said she has always relied on her faith to do her job. She is a member of First United Methodist Church in McAllen, Texas.

“I have faith that The United Methodist Church has the moral authority to demand better. Every religious organization has the authority.”

Kiko Villarreal and Rodrigo Garza came with their pastor, the Rev. Maribel Vazquez, to tell a personal story.

The couple has lived in the U.S. for almost 50 years but a simple trip across the border one day ended with Rodrigo arrested and put into a detention center for three months. He had an old DUI on his record and even though he had paid the fine and taken care of the criminal portion, the immigration violation was still open. He was immediately deported.

Rodrigo, a shy man with many health problems including a tracheostomy — a tube surgically inserted in his windpipe to help him breathe — sat with tears running down his face as his wife explained the terror and confusion she felt when he was suddenly taken from her.

An attorney with Justice for our Neighbors, a United Methodist program that offers legal help for immigrants, helped the family bring Rodrigo home.

Both Kiko and Rodrigo said though it was a hard time, it was also a blessed time because Rodrigo was able to share his faith with several men in the center during morning and evening Bible studies.

The Rev. Maribel Vaquez and the congregations of Los Wesleyanos and Principle de Paz also offered support and love during the time.

“You are the bridge, the door, the frontline workers showing us how to love the stranger, the stranger who is not that strange but our brothers and sisters,” said Bishop Minerva Carcaño, episcopal leader of the California Nevada Conference and director of the United Methodist Immigration Task Force.