The cries of hunger were deafening during the Russian famine of 1921.

On the city streets of Petrograd, now St. Petersburg, abandoned children huddled like discarded rags. Past the outskirts of town, peasants swallowed handfuls of clay to fill their bellies. The dead were stacked in shallow graves.

In the midst of a brutal winter, with a heavy wrap gathered around her slight shoulders, Sister Anna Eklund became a familiar figure standing in the middle of a sleigh loaded with provisions donated by Methodists overseas. At her side was Pastor Oskar Pöeld.

Women and children stand at the stepsof the Ottilie Simons Children's Home in Handrovo, Russia. A UMNS photo courtesy of the United Methodist Commissionon Archives and History.

Though they had little to eat themselves, the two Methodists delivered food and pastoral care throughout the city. Eklund herself would bury 18 among the millions who died of hunger.

This story of devotion to Wesleyan faith is but one chapter of a Methodist history that is being reclaimed during the centennial of the official birth of Methodism in Russia. Before the church was slowly suffocated by labor camps, murder and other forms of persecution in the Soviet era, there was a vital movement that left its mark in Methodist annals.

This summer's anniversary celebration within the Eurasian Area of The United Methodist Church offers the opportunity to discover what historian S T Kimbrough calls the "amazing" accomplishments of Methodists during a brief period of freedom a century ago.

"The period of time is so short. You see this large number of people, comparatively large for that short period of time, involved," Kimbrough says. "It's a phenomenal story."

There are indications of Methodist work among Swedish immigrants in St. Petersburg as early as 1881. But the breakthrough began around the turn of the 20th century. Industrialization was taking hold in the empire and the working class began thinking beyond the czarist structure of government. Unrest was brewing among the masses.

Citizens were dissatisfied not only with imperialism but also with the Russian Orthodox Church's perceived alliance with the ruling elite. There was a receptive audience when Protestant missionaries from Europe and the United States preached throughout the empire. 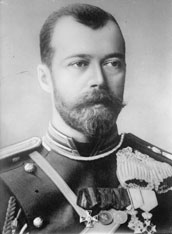 Nicholas II, czar of the Russian Empire, 1914. A UMNS photo courtesy of the Library of Congress.

Czar Nicholas II answered this general restlessness by issuing the 1905 Edict of Toleration, which granted religious minorities the right to exist. Four years later, in 1909, the czar officially recognized the right of the Methodist denomination to exist within his empire.

About the time Henry Ford was rolling out the Model T, the Methodist Church was becoming an influential force in Petrograd and the Baltic states.

In Lithuania, Latvia, and Estonia, younger citizens, in particular, hungered for Wesleyan theology and the Methodist Episcopal Church in Europe and the United States reached out. As the need for meeting spaces grew, church members who were barely feeding their own families laid precious jewelry and watches on the table to help fund places of worship.

Some of those buildings still stand today, including Sanciai Church in Lithuania.

Shortly thereafter, on the eastern edge of the empire, the Siberia-Manchuria Mission was launched by the Methodist Episcopal Church, South, which served Russian-Korean farmers and ethnic Koreans who fled from the Japanese invasion of 1910.

Methodism grew on the edges of the empire. Large numbers of devotees helped to build churches, schools, clinics and orphanages. Within these pockets of influence, there was great hope for future congregations.

But in 1917, everything changed. The Bolsheviks gave rise to a revolution.

In the early days of the revolution, the Methodist church continued to grow, albeit carefully and quietly. As the dissidents wrestled power from the czar and the ruling elite, they did not have a unified strategy regarding religion.

There was an insistence that the Russian Orthodox Church separate from the government and that personal allegiance be focused on communism. Religious leaders who were considered enemies of the new order were targeted, but there was no initial desire to eradicate religion entirely.

Authorities kept a watchful eye on the Methodists, sending secret police to attend services and report on church people and activities. Nevertheless, the Petrograd Methodists procured a building. A fence was constructed around it from the famine relief boxes sent to Eklund.

At the same time, the Methodist Episcopal Church South was developing congregations in Russian Siberia, with 1,000 reported members and an additional 5,000 attending. 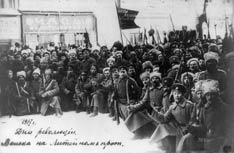 Russian soldiers line the Liteinyi Prospect in Petrograd (now St. Petersburg), Russia, in 1917. A UMNS photo courtesy of the Library of Congress.

But the reformers lost the power play and stronger forces within the revolution extinguished the relationship between the Methodists and the Russian Orthodox Church. The birth of the repressive Union of Soviet Socialist Republics resulted in the confiscation of church property and the persecution of the Methodist faithful.

The persecution of religious leaders within Russia began in earnest; those who did not evade authorities were either sent to labor camps or faced the firing squad. When the Bolsheviks reached Russian Siberia, those churches migrated to Manchuria.

In 1927, as Charles Lindbergh was flying across the Atlantic, Stalin was taking full control of the Communist Party. The Methodist Episcopal Church South decided to focus efforts elsewhere and eliminated mission support in the Siberian region. When the last Methodist missionary pulled away from the train station, a weeping crowd of believers begged him to stay.

In 1940, as Hitler invaded Europe, Stalin's forces occupied the Baltic States and the churches suffered quick dissolution in Latvia and Lithuania, with many of the clergy making their way to the United States.

Even though the Estonian church operated in the shadows, there are heartbreaking accounts of the fate of Methodist leadership. By mid-century, a third of the Estonian Methodist clergy were persecuted in Soviet prisons or Siberian labor camps.

Estonian faithful, however, clung to their Methodist roots despite risks and dogged efforts of the Soviet secret police. Kimbrough tells of Estonia Superintendent Rev. Martin Kuigre, who in 1940 was pressured to merge his congregation with the Lutherans. Kuigre resisted, asserting that his congregation would meet in secret, if necessary. Authorities acquiesced and the church was not liquidated.

And finally the walls fell.

Workers stand in front of the Methodist chapel and parsonage in Haitolovo, Russia. A UMNS photo courtesy of the United Methodist Commission on Archives and History.

The Estonian Methodists were among the first to lift their heads from the ruins of communism in the late 1980s and early 1990s and reach out to their United Methodist brothers and sisters around the world.

Almost a century after Methodism first caught fire in Eurasia, there were once more signs of hope.

When food shortages threatened the population after the collapse of the government, United Methodists responded. In 1991, the United Methodist Committee on Relief was assigned as the lead agency for humanitarian aid by the Russian government.

The relief efforts mirrored the actions of Methodists 70 years earlier when crates of supplies were sent to St. Petersburg (Petrograd) for distribution during the devastating famine. The charitable actions caught the attention of the unchurched and, once again, the denomination began to grow.

Because the church had legally existed prior to the revolution, it was granted status in contemporary Russia. In some instances, former properties confiscated by the Soviets were returned to congregations; most churches, however, began as they did originally and met in small rented spaces or private homes.

These seeds of faith have grown into over 100 vital congregations today.

As students gather around a kitchen table to share tea at the Russia United Methodist Theological Seminary in Moscow, the energy of the church is evident. These young theologians from all over the former empire are the future of the church. They exchange ideas, challenge opinions, and share struggles.

The Rev. Sergei Nikolaev, seminary president, says he would not be surprised to have a United Methodist Russian president someday. "We are still in the process of discerning a Russian United Methodist model for life, for doing church, for Christian living in Russia," he says, "If we find that model and truly indigenize the United Methodist Church then, we have no limits."

Through the continued efforts of the United Methodist Russia Initiative, the tenacity of these young leaders and their mentors, the church continues to expand in Eurasia.

This summer, in St. Petersburg, the church celebrated the 100th anniversary of Methodism in Russia and 120 years in Eurasia. The Rev. James Athearn, coordinator of the Russia Initiative, reflected on the ceremony, "The St. Petersburg observance brought to mind the image of a great crowd of witnesses from the past and the present."

Bishop Hans Växby has conducted additional celebrations throughout the Eurasia Conference this summer, as many in the former Soviet states learn for the first time that there is, indeed, a legitimate history between the United Methodist Church and Russian citizenry.

It is a history that speaks of peril, sacrifice, conviction-and resurrection.

*Snider is a producer with United Methodist Communications.

Methodism in Russia: 100 Years of Darkness and Light

The United Methodist Church in Eurasia

The lack of regional decision-making authority in the U.S. United Methodist conferences caused the recent dilemma over not being able to hold episcopal elections.
Church Leadership