After Typhoon Vamco, the latest storm to wreak havoc on the Philippines, United Methodists are pooling resources to help people rise from the devastation.

Bishop Pedro M. Torio Jr. of the Baguio Area said nearly 2,000 families from 85 churches in his episcopal area, mostly in Cagayan and Isabela, have been affected.

Typhoon Vamco, called Ulysses in the Philippines, made landfall on Nov. 12, leaving millions without power and many stranded on the northern island of Luzon. It came on the heels of two other powerful typhoons.

The Rev. Rodel Acdal, president of John Wesley College in Tuguegarao, said he opened the doors of the United Methodist school to accommodate families who had to evacuate their homes because of massive flooding.

He described Vamco and its aftermath as horrible. “Cries of desperation to get help were echoing everywhere.” 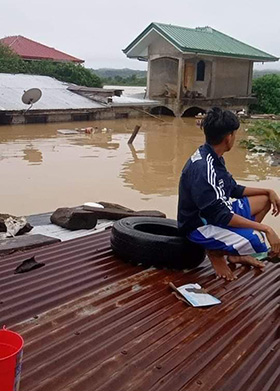 Macky Daguio Mariano, a United Methodist from Afusing United Methodist Church in Alcala, Philippines, waits on his roof to be rescued after Typhoon Vamco (Ulysses) hit the Philippines on Nov. 12. The powerful typhoon caused some of the worst flooding in the region in years. Photo courtesy of Marissa Daguio Caguete.
“Water levels rose so quickly that the people were not able to evacuate immediately and they were trapped in their houses with nowhere to go. Houses sunk already in deep flooding, leaving them no other choice but to climb on their roofs crying and waiting for help,” Acdal said. “Everyone was in dire need of rescue.”

Macky Daguio Mariano, a United Methodist from Afusing United Methodist Church in Alcala, was stranded on his roof for three days. After being rescued, he helped his church deliver food and other relief to fellow evacuees.

His pastor, the Rev. Jonathan Dave Zinampan, said the church sheltered five families after the storm. One thing he will never forget is “the preparedness of hearts to give.”

“There is an overflowing of help from others,” he said.

Bishop Torio said despite the immediate outreach, people need more help to get back on their feet.

“Most of their belongings were damaged if not totally destroyed, not to mention their crops that should be ready for harvest,” he said, noting that the most urgent needs are food supplies, clothes and jobs.

Donations can be made through UMCOR's International Disaster Response Advance #982450. Money from this fund is used to respond to disasters around the world.
Acdal said safe water, bedding, medicine and vitamins for infants also are needed.

The United Methodist Committee on Relief has provided $10,000 emergency grants to both the Baguio and Davao episcopal areas and two $10,000 grants to the Manila Area for relief operations from the trio of typhoons.

Torio said he is glad United Methodist districts and annual conferences have sent teams to help, but expressed concern about the long-term economic impact on families.

“I am worried about the earning capacity of parents and heads of families. This is a special concern because during this time of the pandemic many people lost their jobs,” he said, adding that the Baguio Episcopal Area will be monitoring and coordinating efforts to provide relief and rehabilitation for affected areas.

Loumer P. Bernabe, a United Methodist and fleet commander in the Philippine Navy, said a Navy ship is bringing 225 tons of assorted food packs, clothing, construction materials and equipment to the region.

He expressed his hope and solidarity as Filipinos rise above this catastrophe.

“We are all God’s helping hands for the people in need,” he said.

Despite their struggles, the bishop said, church members have been upholding the Bayanihan spirit. “Bayanihan” means a culture of civic unity and cooperation among Filipinos.

Trixia Son U. Acdal, a United Methodist youth in Tuguegarao City, led her United Methodist Youth Fellowship team in the Northern Philippines Conference in campaigning for people to donate 100 pesos for reeling Cagayan families. Trixia is the daughter of the Rev. Rodel Acdal.

“I talked to the Lord to use me as a vessel for his glory, especially if this typhoon aftermath worsens,” she said.

Her team was able to provide food and other supplies for 100 families and she said more funds are pouring in each day.

“We started with 100 family packs. And as of now, we are ready to distribute approximately 500 (more),” Acdal said. “Let us continue to serve all the people and see all the people.”

Paula May Adduru, another United Methodist youth from Ilagan, mobilized volunteers, with some as young as 13. 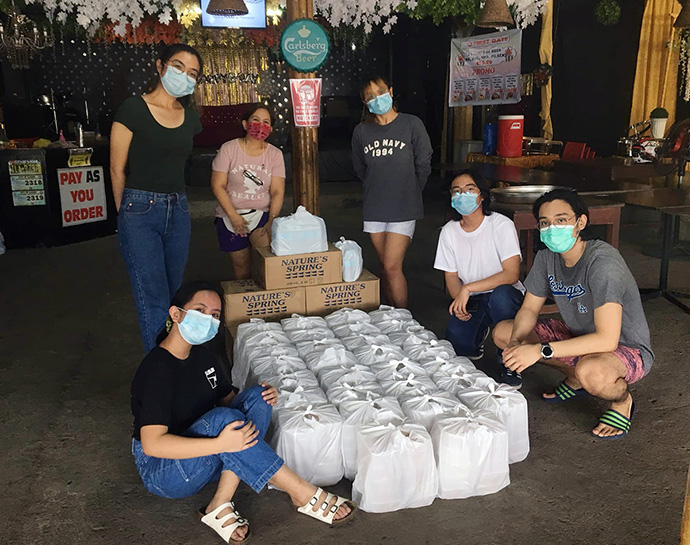 Paula May Adduru (bottom left), a United Methodist youth who works with the Barkadamayan organization, gets ready to serve meals and distribute relief packs to typhoon survivors in Ilagan on the Isabela province in the Philippines. Photo courtesy of Paula May Adduru.
“Our (Barkadamayan) organization welcomes everyone regardless of their religious beliefs and affiliations,” Adduru said. She said her organization has provided relief packs for more than 600 families and hot meals to 250 individuals.

“Most of us are digital natives, so we maximized the use of social media and online fund transfers to conduct a drive for our ailing brothers and sisters,” she said.

“The threat of COVID-19 has taken the back seat for a while in terms of our priorities, underscoring the importance of providing personal protective gear such as face masks and face shields as well as vitamin supplements to boost their immunity.”

April Grace Mercado, a senior project specialist for United Methodist Communications, said that due to massive power outages, three generator sets have been loaned to churches to provide free charging.

Bishop Rodolfo A. Juan was grateful for the help.

“This is one thing that we celebrate — that in the midst of critical times, the spirit of sharing and cooperation is felt. … I praise God for our connectional UMC. General agencies are partners in worldwide mission,” he said.

“Amidst the heartbreaking incident, people fix hearts, piece by piece, through charity work and inclusivity,” he said. 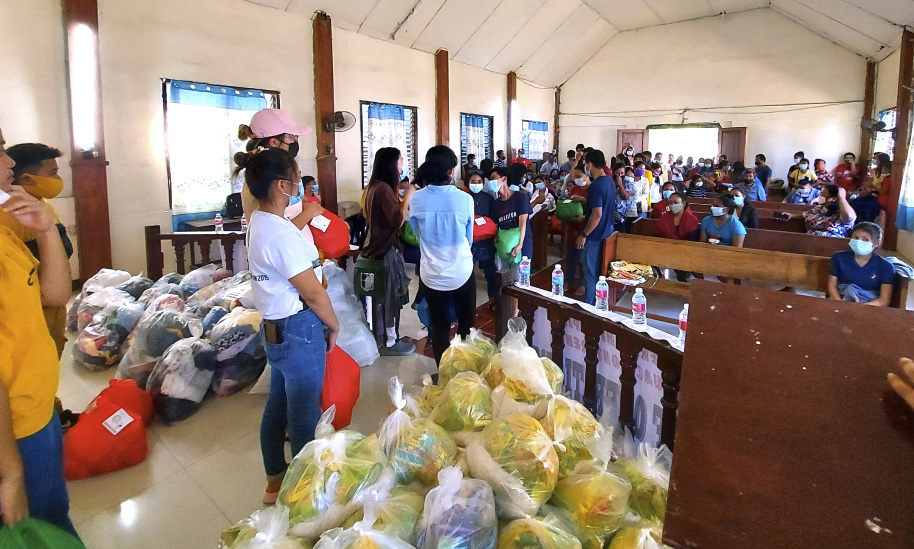 Adduru agreed and said the spirit of cooperation has given her hope.

“These are trying times for us, but with the spirit of Bayanihan, little by little, we will rise and recover as a stronger community,” she said.