At least 100 people were reported to have been killed in violent attacks in the Beni region since Nov. 2, said United Nations High Commissioner for Refugees spokesperson Charlie Yaxley in a press briefing Nov. 29. He said thousands have been displaced, most of whom are women and children.

In late November, four Ebola response workers were killed by armed groups in Beni, and six others were injured, according to the World Health Organization. 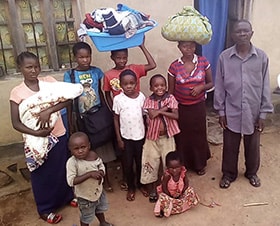 Balaganire said he is worried the violence may facilitate the spread of Ebola and hamper awareness and control activities.

“Most of the population is on the move and there are places where aid workers are no longer arriving due to insecurity,” he said.

WHO evacuated a third of its 120 Ebola responders from the area after the most recent attacks, according to the U.S.-based National Public Radio.

Balaganire said the United Methodists who were killed were members of four churches in the Beni ecclesiastical district. “They were killed and maimed with a machete,” he said.

Armed groups have been targeting civilians and displaced populations in the region since the launch of a government-led security operation against the Allied Democratic Forces Oct. 30, Yaxley said.

Balaganire said he counted 78 United Methodist families among those displaced and living in deplorable conditions. Church members in Beni have taken in some of them, he said.

“We have welcomed them into our families … The situation is complicated because host families are overwhelmed and even finding food is becoming difficult.”

He said church members are organizing to assist families in local churches, but it is not enough.

“Our means are limited and the price of food has risen dramatically. Farmers no longer know how to go to the fields because of insecurity,” Balaganire said.

“Life is becoming unbearable in Beni with this situation of wars and massacres in our district, beyond the Ebola virus disease. It is because God exists that we continue to exist; it is by the grace of God that the district exists and his word comforts us,” Usumbu said.

He said the last massacre, where six people were slaughtered, took place in Masiani, about a mile from his house.

“It’s the great fear in Beni. … During the day, we are in the house, but in the evening we are forced to come to the city center to look (for places) to sleep.”

East Congo Bishop Gabriel Yemba Unda said he was saddened by the violence.

“I am very dismayed and touched by the death of my followers. It’s news that revolts me. I feel helpless in the face of these macabre killings. I pray to God that they will receive their souls in heaven,” he said.

Unda called on Christians around the world to pray for the people of Eastern Congo and Beni, in particular, who have been scarred by repeated wars.

“I ask you, brothers and sisters, not to forget the people of Beni in your prayers. Only God can provide a lasting solution to our problems.”

In the aftermath of the attacks, young United Methodists were among those speaking out. Members of the ecumenical Church of Christ in Congo held gatherings in Bukavu and Goma to preach peace.

“The young Methodists call on the entire population of Beni to be nonviolent because such violence could block the church's efforts to raise awareness about the fight against Ebola virus disease,” said Moses Mwango, youth president of the Kivu Conference.

Since the outbreak began in August 2018, more than 3,000 Ebola cases have been confirmed and more than 2,100 people have died, according to WHO.

Munyema called on authorities to strengthen security to support efforts to end the Ebola outbreak and urged The United Methodist Church to double its outreach efforts.

“Nothing is more odious than to attack health professionals who care for the sick and help people in need,” he said. “Every attack of this type interrupts efforts to stem the outbreak of Ebola, which endangers the health and well-being of men, women and children.”

Even as United Methodist conferences deal with mounting church exits and disagreements over LGBTQ inclusion, they are bearing a shared witness on gun violence. And they are urging actions beyond thoughts and prayers.
Social Concerns