About 75 United Methodists gathered at sundown Aug. 12 in Ferguson, Missouri, to offer peace and hope amid renewed unrest.

The interracial group of clergy and lay members came at the request of the Rev. F. Willis Johnson Jr., United Methodist pastor of Wellspring Church, and founder of the church’s Center for Social Empowerment and Justice. The largely African-American church is roughly a block from the St. Louis suburb’s police station.

Violence had erupted earlier in the week as demonstrators marked the first anniversary of the shooting death of Michael Brown, and with his community now in an official state of emergency, Johnson urged his colleagues to join him in nonviolent protest.

“We asked for United Methodist clergy, allies and people who are justice-minded to join us here in Ferguson so we might be a presence of peace,” the Rev. Pamela Lightsey told those assembled in Wellspring’s sanctuary.

Lightsey, who helped organize the event, is the associate dean of community life and lifelong learning at United Methodist Boston University School of Theology. She has been actively supporting Johnson’s efforts for the past year.

“As people of faith, we want to be in obedience to the One who is divine love, which means being concerned about our neighbor,” she said.

The evening began with some time for instruction— the four steps to nonviolence outlined in the Rev. Martin Luther King Jr.’s Letter from Birmingham City Jail and a reminder of the potential risks involved in direct action. The Rev. Valerie Bridgeman, associate professor at Methodist Theological School in Ohio, a United Methodist seminary, then directed a time of song, prayer and Holy Communion.

“On the night he gave himself up for us, Jesus was among friends,” she preached. “And so we are among friends. We gather tonight to give our lives for the cause of justice — which is the cause of Christ. We become the incarnation of God’s protest against injustice, and the way that happens is that we do it together.”

“What would Jesus be doing?” hollered a protester several yards away, no doubt prompted by the mass of clergy stoles and collars.

“He’d be marching with us,” a female pastor responded.

The United Methodists marched single file, slowly, back and forth on a crosswalk across the avenue. The group started when the traffic light was in their favor, but the light turned a few times before the whole group got across, and they blocked traffic. The sound of car honks filled the night air.

Law enforcement officers looked on, and then approached Johnson. After what appeared to be a cordial conversation, the protesters stopped. 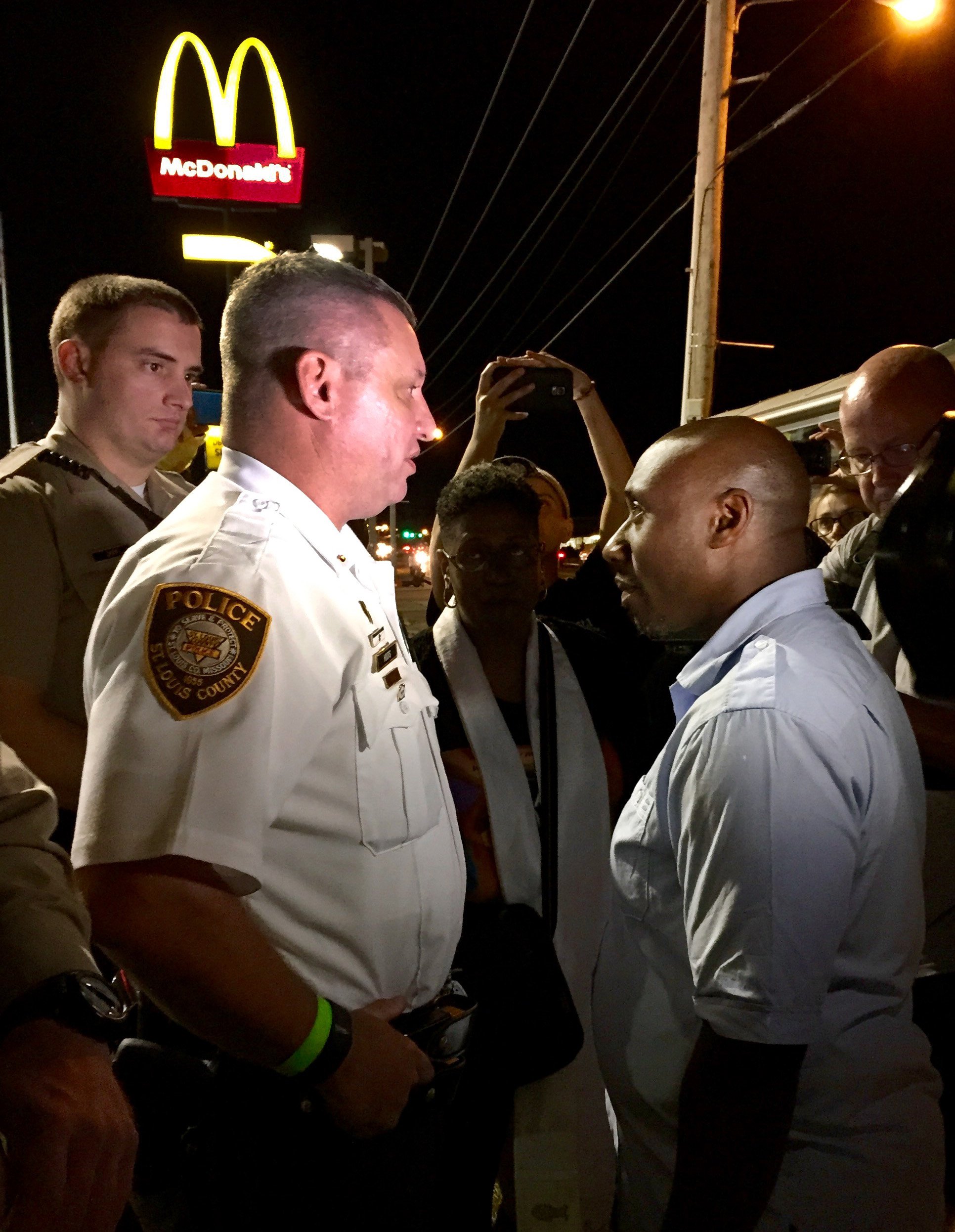 Trying to be a witness

Matt Berryman, executive director of the Reconciling Ministries Network, shared his thoughts on the church’s responsibility regarding racial injustice. His unofficial United Methodist group advocates for the church to be more inclusive of people regardless of race, ethnicity, disability, sexual orientation or gender identity.

“Jesus emptied himself, was in the form of God taking the form of a servant, giving power to those who had no power,” Berryman said. “So if the church is in the name of Jesus and the ministry of Jesus, then we cannot afford to accept the status quo and cast our lots with the privileged and the powerful.”

Other United Methodists shared similar reasons for responding to Johnson’s call to action.

“Part of (the church’s) role is to hold up a mirror to ourselves to see how we participate in systems of oppression,” said the Rev. Diane Kenaston, pastor of University United Methodist Church, near Washington University in St. Louis. “We must also honor our baptismal vows to resist evil, injustice, and oppression in whatever forms they present themselves.”

United Methodists across the United States have tried to find productive ways  to respond when unarmed African-Americans have died in police custody or at the hands of law enforcement.

“The church’s role is often just to name the ugly that is happening so people can heal from it,” said the Rev. Daniel Shanks, associate pastor of youth and young adult ministries at Living Word Church, a United Methodist congregation in Wildwood, Missouri. “Once you start healing, that’s where hope comes from.”

The work in Ferguson

Over the past year, Johnson and other United Methodists have been working together to be peacemakers in Ferguson.

In the days following Brown’s death, Wellspring opened its doors to anyone in the community who needed counseling. Wellspring members and other area United Methodist volunteers also welcomed children to Wellspring when clashes between protesters and police led the local school district to delay the start of classes.

But Johnson would like to see more clergy get engaged in social justice movements. “We’re so invisible,” he said.

Yet, he said, United Methodists historically have been leading voices of care and intervention.

“Scholarship that’s shaping and formulating strategy and purpose is coming out of our tradition,” he said. “Methodists have a stake in this. We’ve been active in this movement, and we need to let people know. We need to show up.”

Katrina Drew, associate pastor at Centenary United Methodist Church in St. Louis, agrees. “I don’t think Jesus would be silent, so we shouldn’t be either. We — United Methodists — should be out there.”

Hartnett served as the director of communications for two churches in Missouri and blogs for the Center for Church Communication. Contact Vicki Brown at (615) 742-5470 or [email protected].