Before worship most Sundays, the pastor of Wellspring Church in Ferguson, Missouri, races more than 2 miles to the spot where Michael Brown lost his life. As his feet pound the pavement, Johnson prays. 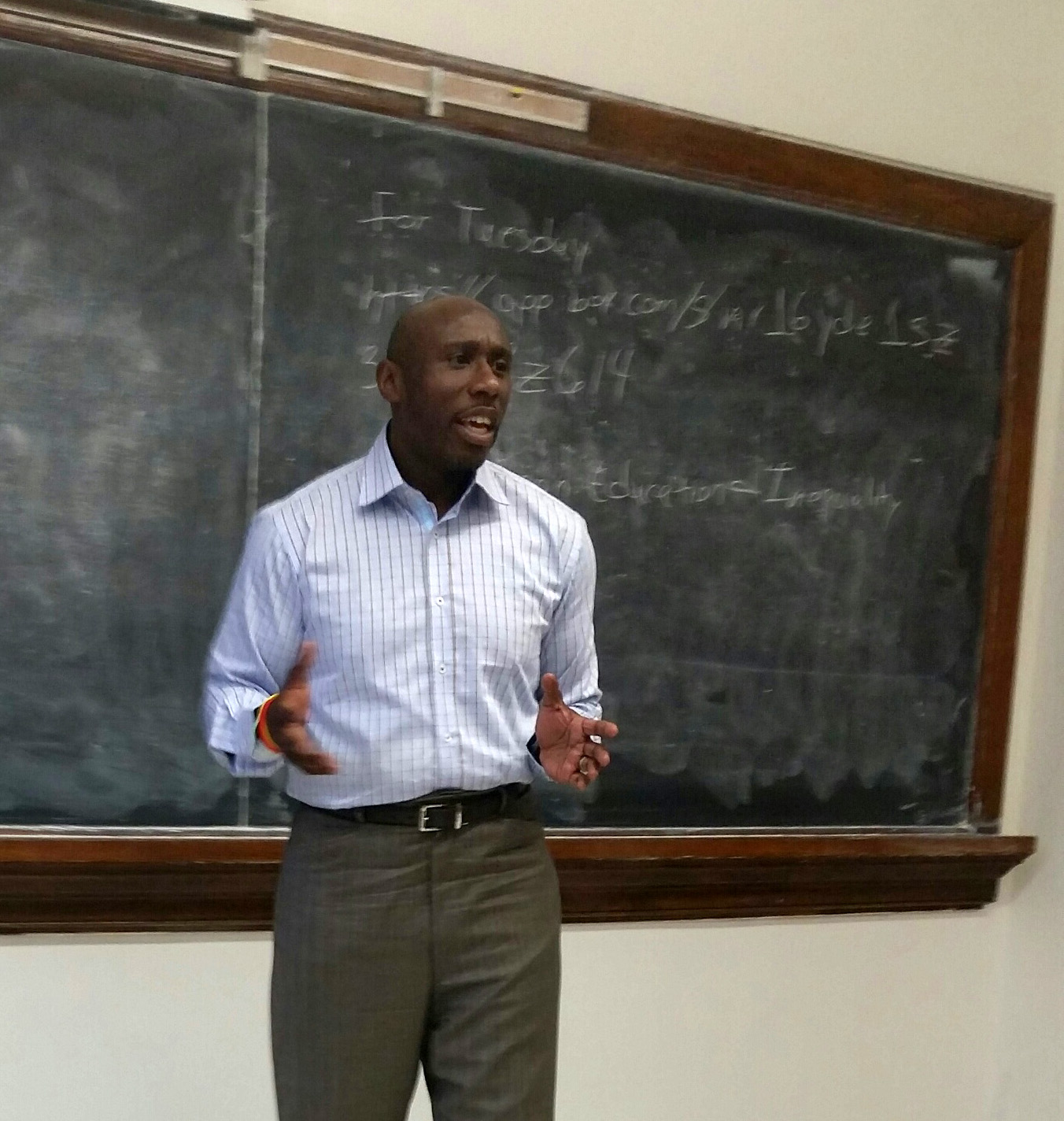 The Rev. F. Willis Johnson speaks at Howard University in Washington in an economic class where students did a case study on Ferguson. Photo courtesy of Akyiah Phillips.

Tensions remain high nearly two months after a Ferguson police officer shot Brown, a young African-American man who was unarmed. That led to clashes between police and protesters, hundreds of arrests and the summoning of the Missouri National Guard for security.

Johnson and other United Methodists still are working together to be peacemakers in Ferguson and surrounding communities in the St. Louis area. But they warn that it will take a long time to build community and establish trust between law enforcement and people of color.

United Methodist leaders agree that churches have an important role to play in the arduous healing process ahead.

To that end, the Missouri Conference has set up a fund dedicated to the Christian witness in Ferguson and has designated Wellspring Church — the predominantly African-American congregation Johnson started in 2011 — to lead that witness. So far, the church has focused on education, economic empowerment and other ministries aimed at bringing people together across racial divisions.

Missouri Area Bishop Robert Schnase said he continues to pray for the people of Ferguson “especially those most deeply and personally affected by the events seen in the news.”

“United Methodists have been active in responding, and I’ve been deeply moved by the leadership offered by Rev. Willis Johnson and other area clergy and laity who have offered insight, understanding and a voice of compassion and a ministry of presence,” the bishop said. “The events of Ferguson and the conditions that made the situation ripe for conflict challenge us to reflect more deeply about the witness and role of the church.”

Erin Hawkins, top executive of the United Methodist Commission on Religion and Race, praised the collaboration among Missouri churches in response to the crisis in Ferguson, Missouri.

“But it also speaks to the need for dialogue at times when there isn’t a heightened event that captures our attention,” she said.

She also said that it should not just be up to African Americans and other people of color to start the conversation.

The Rev. Ginger Gaines-Cirelli, senior pastor of the multiethnic Foundry United Methodist Church in Washington, D.C., echoed that advice. She recently participated in a panel discussion at the National Cathedral on Ferguson, racism, violence and the church's response.

“As we engage in this process, listening needs to be our primary posture. And in order to listen well, humility is required,” she said. “Guided by St. Paul, we can “speak our truth in love” and listen with open hearts and minds, such that we might actually receive what is being shared.”

The Commission on Religion and Race offers worship resources and other suggestions for helping United Methodists get conversations started.

Protests again turned violent Sept. 23 after a fire that morning destroyed one of two memorials to Brown.

The memorial has since been replaced, and police say the fire’s cause is under investigation.

Meanwhile, a St. Louis grand jury is reviewing evidence to determine whether Darren Wilson, the white police officer who shot Brown, should face criminal charges in the case. This week, a judge agreed to allow the grand jury also to hear evidence in a separate drug case in which Wilson was the arresting officer and for which Wilson received a commendation.

The U.S. Department of Justice’s Civil Rights Division also is investigating the Ferguson and St. Louis County police as well as the county’s juvenile justice system.

What Wellspring is doing

In the days following Brown’s death, Wellspring opened its doors to anyone in the community who needed counseling. Church members and other area United Methodist volunteers also welcomed children to Wellspring when the tumult led the local school district to delay the start of classes.

Wellspring continues to look for ways to partner with the local school district, Johnson said. This month, the church plans to start a Saturday Academy to offer youngsters educational opportunities on the weekend.

In addition, the congregation has worked with other areas churches to organize interracial Faith4Ferguson Unity Runs/Walks. The 5-mile runs include a stop by the memorial site that marks where Brown died. The goal, according to fliers, is to promote “health, hope and uplift for Ferguson.”

Johnson also hopes that in visiting the site of tragedy, some runners will experience a spiritual revival.

“We have to have that revelatory moment that drives us, moves us or angers us into the great work of living for God,” he said.

The Rev. Ivan James, pastor of the largely African-American Asbury United Methodist Church in downtown St. Louis, said those early days of collaboration have strengthened the bonds among area United Methodist congregations. Some United Methodists are joining in reading the Rev. Martin Luther King Jr.’s book “Where Do We Go From Here: Chaos or Community?”

He added that many churches now are more active in their own communities in promoting interracial dialogue and raising consciousness about the reasons for unrest.

Make no mistake, James said, the problems of fear and distrust between city leaders and local residents extend well beyond Ferguson’s city limits.

The Rev. Matt Miofsky, lead pastor of The Gathering, a predominantly white, multi-site United Methodist congregation, said area churches are talking about how they “can be part of changing the conditions that lead to things like Michael Brown’s death.”

Ultimately, he and other church leaders say, the community will need systemic change to achieve peace and racial reconciliation.

The denomination’s constitution in the Book of Discipline declares: “The United Methodist Church shall confront and seek to eliminate racism … in every facet of its life and in society at large.”

The denomination’s Book of Resolutions, which contains the church’s teachings on current social issues, also includes the following statements:

Help from a church that’s been there

Six years ago, a black man burst into Kirkwood’s City Hall and fatally shot five white officials before police shot and killed him.

The Rev. David Bennett, lead pastor of Kirkwood for 17 years, said he and his mostly white congregation immediately looked for ways to help with the community’s healing. That began by offering his church to hold the funeral of the shooter, Charles “Cookie” Thornton.

Perhaps most significantly, Bennett and other Kirkwood leaders helped organize interracial small groups that met monthly for three hours to discuss the issues facing the city. Altogether about 450 residents participated over four months.

As a result of those talks, community leaders invited to town the Justice Department advisory unit specializing in race relations, and leaders — including Bennett — worked with City Hall to institute changes in Kirkwood. Those included a strengthened Human Rights Commission with authority to arbitrate disputes.

Members of Kirkwood and Wellspring are planning similar small groups in Ferguson that would also involve city officials.

“We’re really in the formative stages right now,” Bennett said. “For one thing, Ferguson is just not ready for this. Things are just so volatile right now.”

Bennett, lead police chaplain for the Kirkwood Police Department, added that Ferguson is dealing with its own daunting challenges. One-fifth of the city’s operating revenue comes from court fine collections, reports Governing magazine. 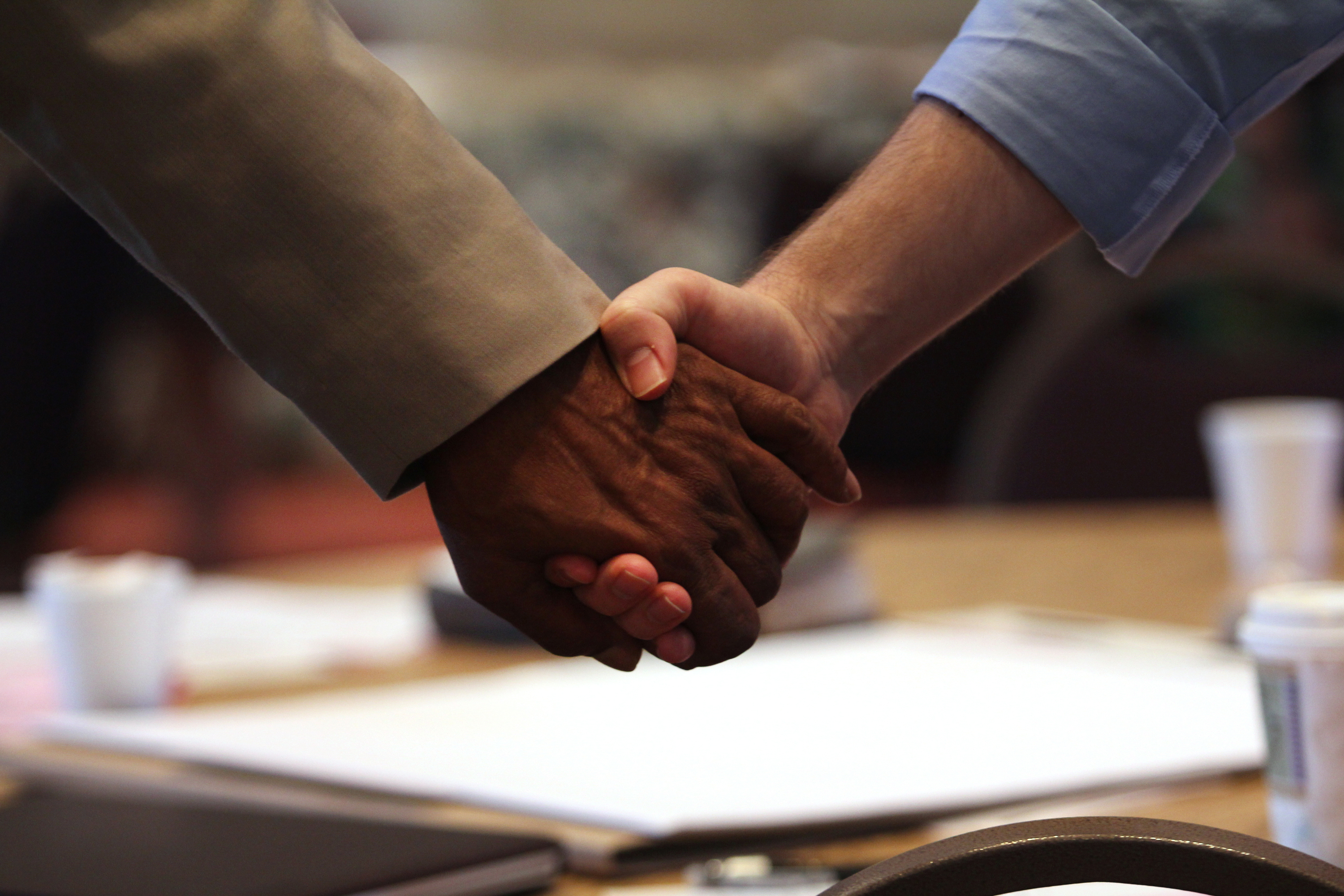 “That’s part of this problem,” Bennett said. “You can’t even pay your fine because the courts are too full, so then you get a warrant for your arrest and a double fine. That’s absolutely wrong. But they are starting to change that.”

For now, Bennett said, he and Johnson are working together to help people understand each other.

Peace will only come when people in the community recognize the sacredness of every person and “act justly, lovingly and equitably,” Johnson said.

“That’s the spirit of that Hebrew word shalom and the Greek word irene,” he said. “We have yet to be loving to each other. We darn sure have not been equal.”

No matter what the grand jury decides or how the public responds, Johnson said, Wellspring Church will keep its doors open and strive to be responsive to community needs.

“We are a refuge in a time of trouble,” the pastor said. “We are keeping our hearts open because if we are not providing hope, that is when this community is in real trouble.”