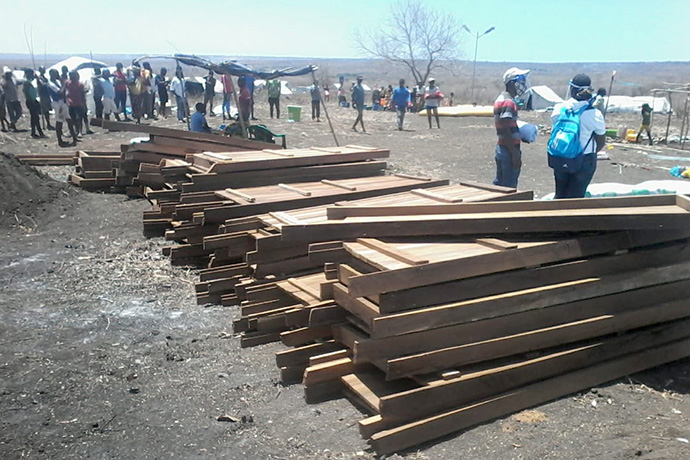 The United Methodist Committee on Relief is providing materials to build temporary shelters for thousands of people who fled attacks by Islamist insurgents in the Cabo Delgado province of northern Mozambique. Photo by Eurico Gustavo, UM News.

The United Methodist Church is responding to a growing humanitarian crisis in the Cabo Delgado province of northern Mozambique as attacks by Islamist insurgents have escalated, forcing thousands of people from their homes.

The Rev. Dercia Marrengula, district superintendent of Cabo Delgado, said people are fleeing to other provinces seeking security for their families.

“In our district, we have families of our church members whom we do not yet know their whereabouts,” she said. “Some of these affected families include pastors, and we are still doing phone searches to see if we can locate them, but the job is not easy.”

The insecurity in this resource-rich region has been taking place for a few years, but the situation has intensified in recent months with increased attacks on civilians, including the beheadings of more than 50 people in several villages, according to state police.

“Initially, insurgents did not kill, rape, steal or plunder or harm people,” Marrengula said. “Unfortunately, the lack of meticulous attention on the part of our government officials, coupled with the ‘peaceful’ behavior of the insurgents, may have contributed to the formation and rapid growth of a force that is now uncontrollable.”

According to the United Nations’ International Organization for Migration, the number of displaced people in the area has increased to more than 355,000 from about 88,000 earlier this year.

“Due to the massive and forced exodus, many families are separated,” said Rosa Garibo, who fled from Macomia along with her husband and three children to the outskirts of the city of Pemba, the capital of Cabo Delgado. “Members of the same family are separated from each other, however without knowing whether they are still alive, eaten by wild animals, murdered or kidnapped by insurgents,” she said.

Marrengula said thousands of people are scattered by the beach. Some are staying in shelters in Nampula, a neighboring province of Cabo Delgado, and in the bordering districts of Erati, Memba, Mecuburi and Lalaua.

“In the Sofala province, we have received hundreds of families who fled from the insurgents in Cabo Delgado,” said Graca Vilanculos, district director of education in Dondo and a United Methodist.

“They need food, clothing, shelter, pots, plates and cutlery. They also need medical assistance. Practically, they need everything to start a new life,” she said.

“UMCOR came to this part of the country to support in foodstuffs, buckets and even protective materials for COVID-19,” said Respeito Chirrinze, the relief agency’s disaster coordinator in Mozambique, adding that health problems at shelters are often greater. “We have already supported more than 500 families.”

He said the relief agency provided a $100,015 grant initially for Cyclone Kenneth survivors in the Macomia District in Cabo Delgado. But due to the natural disaster, political instability and COVID-19, the designated beneficiaries fled to the outskirts of Pemba.

“UMCOR support followed them there to provide them shelter, meals, hygiene and health materials in this time of pandemic disease,” Chirrinze said.

He said he is preparing to apply for a global migration grant through UMCOR. “We plan and are committed to continue supporting the survivors in Cabo Delgado.”

Funds from the relief agency also provided materials to build temporary shelters on land distributed to displaced families by the government in the rural area of Pemba and in Metuge in the Cabo Delgado province.

Donations can be made through UMCOR’s International Disaster Response and Recovery Advance #982450.

United Methodist churches across the country are raising money and gathering donations to be channeled to survivors of the armed conflict. They also are working with other humanitarian organizations in the region.

“We hope that in the short run, our support as a church will reach our brothers and sisters in Cabo Delgado,” said the Rev. Jacob Jenhuro, episcopal assistant in northern Mozambique.

The United Methodist Church in this region has been growing rapidly since 1997. The Mozambique North Conference was created in 2000.

“The rapid growth that is witnessed currently is, in part, a result of dedicated sons and daughters of God who do not measure distances, do not look at time, geographical and environmental conditions to do the mission,” said the Rev. Filimao Punguane Vilanculo, a former district superintendent in the conference.

After 16 years of civil war, he said, people were able to move easily within the seven northern provinces of Mozambique, but the recent insecurity has complicated evangelism efforts.

“Currently, in the affected areas, there have been no worship services because people are on the run and looking for safe places,” Marrengula said.

Due to the insecurity in the northern districts of Cabo Delgado, the church did not appoint pastors in the region at its last conference session in October of 2019.

“As a church, we saw the need to inform and appeal to our brothers and sisters in the areas affected by the conflict to leave for safe zones while there is time,” said Mateus Chedeque, a member of the Cabo Delgado mission field.

Marrengula said the church will continue to look for ways to support war survivors.

“The church feels that it must comply with the command of Jesus Christ in the Gospel of Matthew 22:34-39, which talks about love and solidarity with neighbor.”

Gustavo is communicator in the Mozambique North Conference.