Bishops and other United Methodists have joined in demonstrations and calls for an end to martial law in Mindanao.

The 60-day martial rule proclamation expired on July 22, but the Filipino Congress voted to extend it through the end of the year.

Philippines President Rodrigo Duterte, based on the recommendation of government security forces, imposed martial law in Mindanao on May 23 when the Maute group seized Marawi City. This was considered an act of rebellion under the constitution, which allows martial law for a period of 60 days.

Manila Area Bishop Ciriaco Francisco and retired Bishop Solito K. Toquero joined in a march after Duterte’s State of the Nation Address on July 24. Both bishops denounced the extension of martial law. 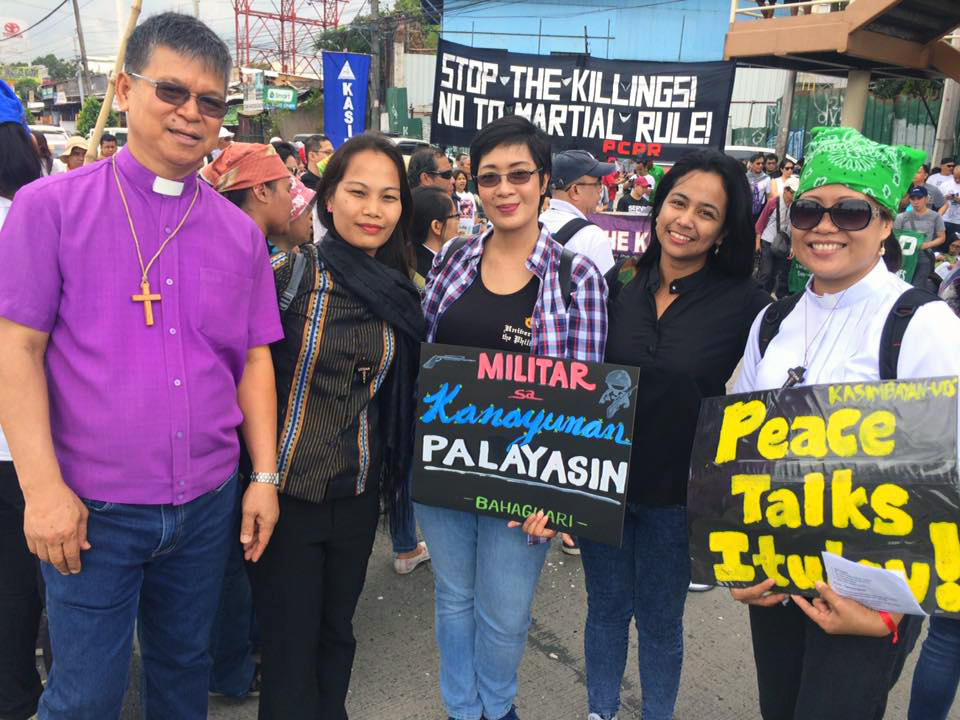 Manila Area Bishop Ciriaco Francisco (far left) and the Rev. Lizette Tapia-Raquel (center) were among those attending a demonstration on the day of Philippines President Rodrigo Duterte’s State of the Nation address on July 24 in Manila. Photo courtesy of Lizette Tapia-Raquel.

Francisco said the president had not followed through on his promises. Instead of peace, there has been suffering and more killings, he said.

A group from the Union Theological Seminary joined the march. The Rev. Lizette Tapia-Raquel, a United Methodist clergywoman, said she joined the march because Jesus always took the side of the poor and that church people must speak out against inhumane actions.

Earlier, United Methodists joined a July 21 demonstration held outside the headquarters of the Philippines Central Conference offices. The event was organized in conjunction with the Children for Peace Alliance, an ecumenical alliance that campaigns for peace. About 30 staff from the conference offices and clergy from nearby churches stood outside, lighting candles and reading a statement decrying martial law in Mindanao.

Liza A. Cortez, the director of the Asuncion Perez Memorial Centre, the social service and development arm of The United Methodist Church in the Philippines, was among those who spoke out at the headquarters event.

"The campaign calls for a just and lasting peace, mindful that the most affected sector in the present conflict brought about by the ongoing insurgency in the Philippines are the children and youth," Cortez said, adding that the violence has traumatized children.

Those who joined the event called for an end to martial law and appealed to Congress not to extend martial law in Mindanao. 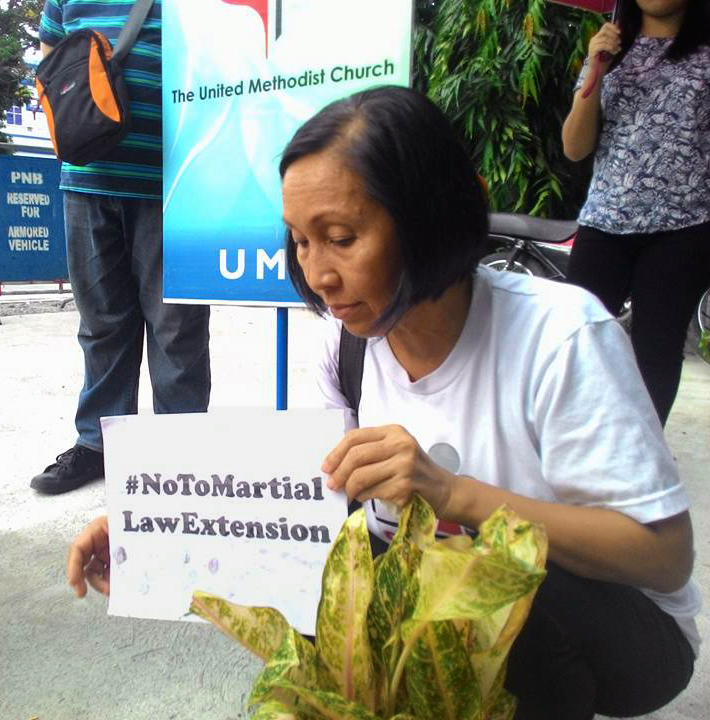 Phebe G. Crismo, executive secretary of the Board of Christian Education and Discipleship for the Philippines conference, holds a sign with the hashtag #NoToMartialLawExtension during a candle-lighting gathering in front of The United Methodist Church Headquarters in Manila. Photo by Liza Cortez.

"The government can put an end to the situation in Marawi without martial law. Martial law is being used to justify attacks against communities, specially Lumad (indigenous) communities, and to harass schools providing services to Lumad children," Cortez said.

Those attacks intensified after martial law was declared May 23, forcing many to evacuate their communities and seek shelter elsewhere.

"While terrorism should be quelled, it should be done without sacrificing civil liberties and the rights of the people,” Cortez said.

Recently, United Methodists were among those who offered assistance to those fleeing from siege.

A statement released by the Philippines Central Conference Board of Church and Society was read at the protest.

"We join the call on the president to immediately lift martial law, be vigilant and guard against abuses and atrocities," the statement said.

The statement said martial law would not solve the problems of the people of Mindanao or right the wrongs done to them. “We remain steadfast in the belief that the solution is in rooting out the causes of unrest and calling for a just and lasting peace,” the statement said.

At a separate event the same day, United Methodist deaconesses joined the Voice of Women for Peace & Justice, an ecumenical group, in condemning the extension. Darlene Marquez-Caramanzana, a United Methodist deaconess, was one of those who read a statement issued by the ecumenical group, which includes Christians, Muslims and Lumads, issued a statement calling for a commitment to peace.

“Today, the dark mantle of authoritarianism looms heavily upon our people,” the group said in a statement calling for a commitment to peace. “Forces of death and destruction in the Duterte administration are forcing their way through to trample upon the rights and liberties of our people.”

Mangiduyos is a United Methodist News Service correspondent based in the Philippines. News media contact: Vicki Brown, Nashville, Tennessee, (615) 742-5470 or [email protected]. To get more United Methodist news, subscribe to the free Daily or Weekly Digests