United Methodists are among those reaching out to assist Filipino civilians caught in the continuing battle between government forces and Islamic State militants on the island of Mindanao.

With support from the United Methodist Committee on Relief, church members from the Davao Episcopal Area led the pooling of resources on July 10 to assist the thousands displaced by violence in Marawi City over the past six weeks.

When asked about the situation in the war-stricken zone, Davao Area Bishop Rodolfo A. Juan said there was still “fierce fighting each day,” with evacuees increasing in number.

The bishop said the Davao area office provided a psychosocial briefing at the evacuation centers in Iligan City and Marawi City and distributed medicines and food items. 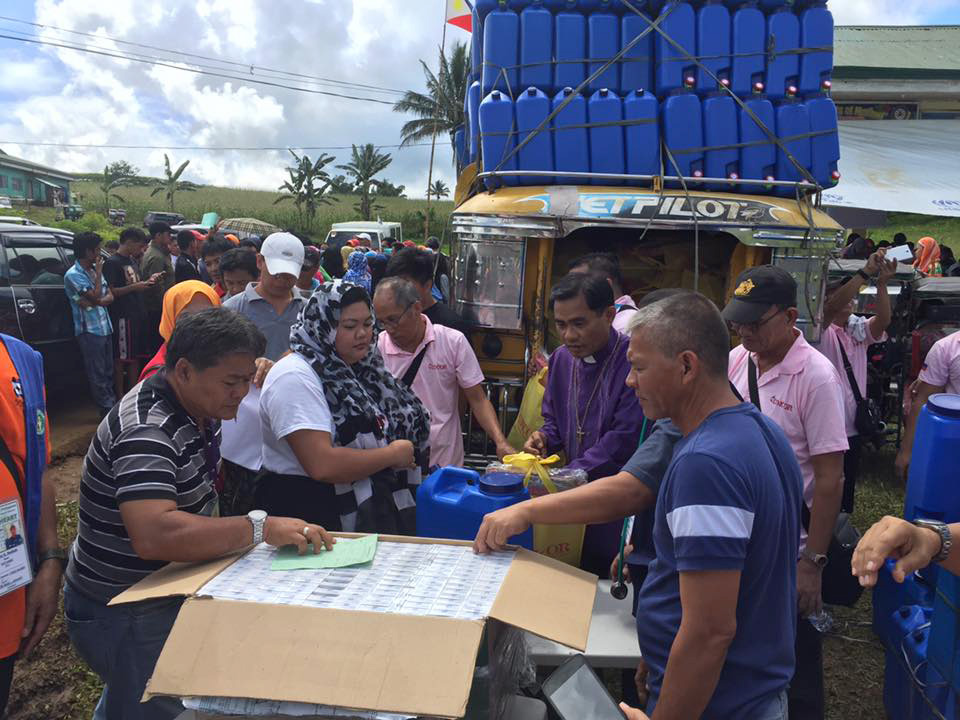 United Methodist volunteers, including Bishop Rodolfo A. Juan (in clerical collar), hand out relief supplies to families who fled fighting with Islamic State militants at an evacuation center in Bito-Buadi, Marawi City, Philippines. Photo by the Rev. Israel M Painit.

"We also brought the mobile bus clinic for our medical optical dental outreach program," he added.

Daniel T. Ela, Juan’s executive assistant, said he had been in touch with UMCOR’s senior director for disaster relief, the Rev. Jack Amick, along with Fita Tulu and Laurie Felder of UMCOR’s international disaster response staff.

Ela has closely coordinated the church’s response with Noralyn Null of ARMM-HEART and Nadia Bubong who is working with the home-based Internally Displaced Persons in Iligan City.

Forced OUt by Conflict

Forced migration, which some residents of Marawi City are experiencing because of the conflict there, “is a growing phenomenon around the world,” says the Rev. Liberato “Levi” Bautista of the United Methodist Board of Church and Society.

An estimated 65.6 million were displaced from their homes last year, the United Nations Office of the High Commissioner for Refugees estimates. “That’s 20 people a minute,” he writes in a reflection on the board’s website. “We are witnessing the largest number of refugees since World War II.

“We continue to hold the people of Marawi in our prayers, as we hold all refugees, whether they are crossing international borders or being internally displaced, dislocated and dispersed.”

The three United Methodist bishops in the Philippines have issued a pastoral statement on the crisis calling on church members to:

"Let us be vigilant in working for the protection of human rights in the midst of war, and do all we can to assist our people in need, (including) those in the evacuation centers by providing food and medical assistance to them,” Juan said.

Bishops Pedro M. Torio Jr. and Ciriaco Q. Francisco said that the pastoral statement has re-affirmed the concern of The United Methodist Church for peace anywhere in the world but most especially in Marawi.

"Let's continue to pray for our brothers and sisters in Marawi so that they will be able to go back to their homes, schools and livelihood. Let God's peace and justice reign in Marawi,” the bishops said.

Mangiduyos is a United Methodist News Service correspondent based in the Philippines. News media contact: Vicki Brown, Nashville, Tennessee, (615) 742-5470 or [email protected]. To get more United Methodist news, subscribe to the free Daily or Weekly Digests