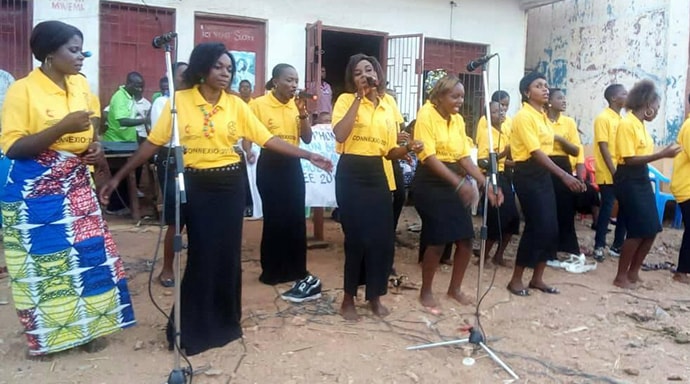 Women play a key role in restoring peace in the Congo, a country still recovering from nine years of war and the loss of some 5 million lives.

Around the time of the second Congo War, which raged from 1998 to 2003, fighting in Kivu in the eastern part of the country developed into two wars that continue to claim lives.

United Methodist women gathered recently in Bukavu and Uvira with their peers from other denominations to reflect on how they could bring peace and Christian unity to Kivu.

The Office of Christian Unity and Interreligious Relations supported the gathering financially. Opened in 2013 by the United Methodist Council of Bishops, the office engages with other Christian denominations to work toward unity and peace by strengthening interreligious relationships that enable community building.

Much of the conflict in the Congo has to do with the rich minerals and other natural resources in the central African country. Also contributing to the unrest are tribalism and interethnic conflict between local communities like Benyamurenge, Bafuliro and Bembe in the highlands of Uvira, Minembwe and Itombwe, and from the presence of Allied Democratic Forces rebel groups in Beni.

Compounding the crisis is the persistent Ebola virus disease. The religious community is not immune to the problems, and division within churches has also occurred.

“I want to use my strength and intelligence to sensitize women … to cultivate the spirit of peace and mutual acceptance in our communities [and], finally, to have unity,” said Jolie Mwaidi, a United Methodist Women leader. She explained that the women begin by identifying problem communities and asking if they can bring the gospel message.

“After the message, if the communities agree to live together, we pray with them,” she said. In this way, the women connect with local political and administrative authorities, Mwaidi added.

Kito Bonane, UMW-Kivu vice president, said as God’s children, women must work to restore peace in places without it. “I want to get involved in my soul and conscience so that peace and Christian unity are observed in our communities,” she said.

The women agreed to evangelize grassroots communities by bringing the good news of the gospel to their neighbors, modeling how to live in peace and fostering Christian unity.

In Uvira, more than 350 women gathered for ecumenical worship that featured songs of peace and sketches on the quest for unarmed peace with the support of CONNEXIO. A partner of The United Methodist Church, CONNEXIO supports Methodist churches in some 20 countries. Among its responsibilities are diaconal, social, missionary and evangelistic work.

And Deo Kurasa, the Nyalukemba neighborhood chief on the periphery of the city of Bukavu, congratulated the United Methodist women for their involvement in the search for peace.

“In my neighborhood Nyalukemba,” he said, “there was violence following the tribalism between communities, but with the women’s effort on peace awareness, my community members now live together peacefully, without violence.”

The Rev. Clement Kingombe Lutala, associate superintendent of the Bukavu District, praised the women’s efforts. “To everything we associate [with] the women,” he said, “there has never been a failure.”

Michel Kizibisha of the Kivu Annual Conference urged the women to take ownership of their involvement in maintaining security and peace.

Eastern Congo Episcopal Area Bishop Gabriel Unda Yemba also applauded the women’s journey toward peace and promised to accompany them in their work.

The attack on a Pentecostal church in Congo, which killed 17, happened near where more than 180 United Methodists were attending worship.
Church Leadership