The National Rifle Association has that as its slogan and taken literally, it is true. But according to statistics from the Brady Campaign to Prevent Gun Violence, every day in America, 297 people are shot — 89 die and 55 of those were suicides.

“Whether it happens in the towns of northeastern Nigeria, a suburb in the United States, the streets of Australia, or an office in France, gun violence has become an all-too-often frightening phenomenon,” states a revised resolution going to the 2016 United Methodist General Conference.

“We need the reality of Micah’s vision more than ever,” states the proposal coming from the United Methodist Board of Church and Society, the denomination’s social action agency. 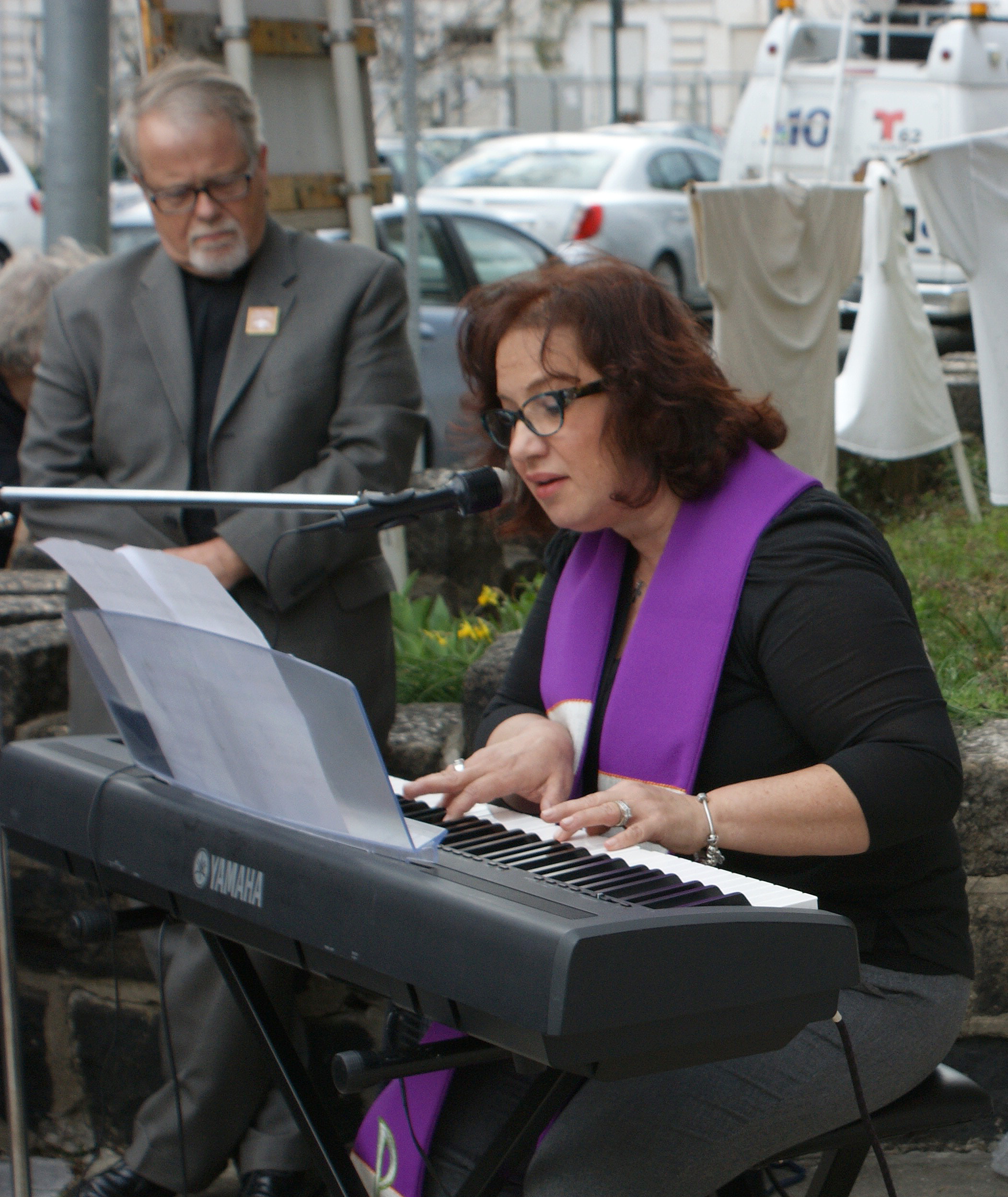 United Methodist pastors the Revs. Lydia Munoz and James McIntire lead the assembled in songs of grief for the lost, faith in God and inspiration. Photo by the Rev. Linda Noonan

On this past Good Friday, March 25, grieving mothers, fathers, sons and daughters carried T-shirts bearing the names of their loved ones who were killed by guns in the past year. The 1.5 mile walk sponsored by Heeding God’s Call to End Gun Violence took marchers to three places where someone was killed with a handgun.

Those three places of violence became three stations of the cross.

“Gun violence takes away young lives before they had a chance to know who they really were and the good they could offer the community,” said the Rev. Bob Coombe, pastor of First United Methodist Church, Germantown, Pennsylvania, where the Good Friday walk began.

“Gun violence takes the life of the one who was shot and the one who did the shooting.  One of the three stops was at an alley where a mother spoke of the loss and grief she still feels from her son’s death by a gunshot.”

Heeding God’s Call to End Gun Violence is a faith-based movement. United Methodists have been involved since its beginning in 2009 with protests against Colosimo’s Gun Center, a notorious gun seller who had been selling firearms to straw purchasers, people paid to buy handguns by people who cannot legally purchase the guns themselves.

The Revs. David Tatgenhorst and James McIntire, United Methodist pastors, were among 10 religious leaders arrested for trespassing and disorderly conduct when they blocked the entrance to Colosimo’s in 2009. Both pastors are still involved in the movement that was born in Philadelphia during that fight.

“For at least eight years we have also participated in a Good Friday vigil in which we remember the crucifixion of Jesus and also 300-plus people killed in handgun violence each year in our region,” Tatgenhorst said. “I have been so moved by this witness as we call out the names of people who have been killed by handguns, holding up a cross or a T-shirt with their name printed on it. I have cried with mothers of young people who have been killed; mothers and fathers brave enough to speak up about their pain. Having experienced in a small way that Good Friday pain makes the resurrection joy of Easter Sunday all the more poignant and powerful.”

McIntire is convinced the gun violence prevention movement is making a difference.

“United Methodists who consider themselves followers of Jesus — which, I pray, means all of us — really have no other option but to work to reduce and end gun violence if they are being faithful to the Jesus message,” McIntire said. “Methodism has always been on the leading edge of justice issues and this issue should be no different. We must be out front making positive change happen.”

No ban on guns

The proposed resolution does not call for a ban on guns. Instead, it lists several suggestions for preventing gun violence including asking United Methodists who own guns as hunters or collectors to safely and securely store their guns and teach the importance of gun safety.

The Desert Southwest Conference has a gun violence task force.

Billie K. Fidlin, director of outreach for the conference, said Bishop Robert Hoshibata issued a call for all churches in the conference to participate in the gun violence study from the United Methodist Board of Church and Society. Findlin said more than half of the churches have already participated.

“This study was a good first step in opening honest dialogue between people on both sides of this issue —  those who own guns, and those who don't —  except we all learned that the issues travel far deeper than ownership,” she said.

The task force offers education, trainings and a speaker’s bureau. Upcoming programs will look at how churches can offer education about buying and using gun-locks, as well as facilitate gun turn-in events in conjunction with law enforcement agencies.

“The mission of the task force ‘is to promote dialogue, information and education about gun violence among the people of God.’ The team will also watch legislation, again emphasizing that we take no stand on whether someone should own a weapon or not.

“The concern is safety for all of God's people, so that we may live out the Great Commission,” Fidlin said.

The Rev. Ann Thomas, pastor of Journey United Methodist Church in Las Vegas, held a forum to discuss a proposed gun background check initiative in Nevada on March 14. She teamed with Nevadans for Background Checks. The initiative would extend firearm background checks to private party sales and some transfers.

“There’s so much emotion around guns and gun violence,” Thomas told the Las Vegas Review-Journal before the event. “I have no interest in taking peoples’ legitimate, legal guns away. I’m hoping to have a civil conversation.”

The Rev. Lydia Muñoz, an elder in the Eastern Pennsylvania Conference, was a worship leader for the 2016 Good Friday walk.

“I would encourage other United Methodist churches to not only find community faith based groups like Heeding God's Call to be involved with but to make their church buildings, their spaces and their resources available so that the community can organize around issues like these and others.

“We need to become community resource centers, helping the community organize, become educated, and to heal and reconcile.  If not then we are only a Sunday morning gathering space with no real relevance. The world doesn't need another one of those organizations.”

The largest United Methodist conference in the U.S. announced it is blocking church exits as a result of “the misleading, defamatory, and false statements and materials shared with local church members.”
Disaster Relief