A mother receives food provided by The United Methodist Church in Beni, Congo. The aid was part of a $100,000 grant from the United Methodist Committee on Relief’s International Disaster Response program to support internally displaced persons in Beni and Rutshuru in East Congo. Photo by Chadrack Tambwe Londe, UM News.

Complete rations for one month were distributed to “the most vulnerable displaced households … to enhance their living conditions as they face the crisis,” said Bintou Diao, program manager for UMCOR’s International Disaster Response program.

The aid was part of a larger $100,000 UMCOR grant issued in June to support internally displaced persons in Beni and Rutshuru in East Congo.

“The eastern region of Congo is the part of our country most affected by repetitive wars since 1960, when Congo gained its independence,” said East Congo Bishop Gabriel Yemba Unda.

The assistance was channeled through the Eastern Congo Natural Disaster Management Office. Beni is one of the six ecclesiastical districts of the Kivu Conference.

Since 2014, residents of Beni have lived under the threat of brutal attacks as armed groups battle for land and the country’s rich mineral resources. Militants routinely invade villages, burn houses and kill and injure civilians.

The neighboring province of Ituri, bordering Uganda, is also affected by violence attributed to the rebels of the Allied Democratic Forces, considered the deadliest of the multiple armed groups that have plagued eastern Congo for more than a quarter of a century. 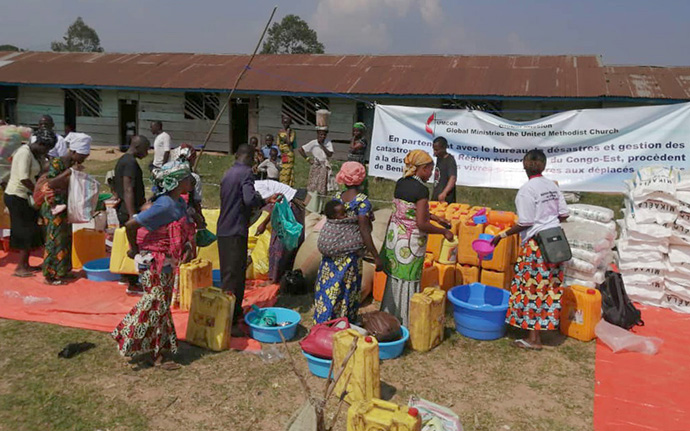 Recipients line up to receive vegetable oil, rice, salt, sugar and other aid distributed by The United Methodist Church in Beni, Congo. Money from the United Methodist Committee on Relief purchased 38 tons of food for displaced families in Beni. Photo by Chadrack Tambwe Londe, UM News.

“Population displacement,” he said, “has intensified since December 2020 toward the city of Beni from surrounding villages following attacks by armed groups.”

Paluku KasuLenge, 56, lived in Mutwanga village, about 28 miles from Beni. He and 11 family members went to downtown Beni to flee the killings.

“Not a week went by without the village being attacked and peaceful people having their throats slit,” he recalled. “To get us to safety and save our lives, we found it necessary to leave everything and come and live here in the city center, where attacks are not frequent.”

KasuLenge said the United Methodist assistance would help him feed his family for a few weeks.

Kazumba Kokola, the 45-year-old head of a family of 10, said he was grateful for the aid, adding “the mission of the church is to bring good news.”

“Through this assistance, we are convinced that God manifests himself through people of goodwill. When I see my displaced brothers and sisters benefiting from the food and other (aid) sent by the church, it gives me joy.”

North Kivu and the neighboring province of Ituri have been under siege since May 2021, an exceptional measure that gives full powers to the army and police but has so far failed to end abuses by armed groups.

“People are suffering terribly because of wars and are constantly on the move to flee terrorists (and) militia groups, leaving behind their property,” Unda said. “Pray (for them and) also for the church, the country and its leaders.”

Londe is a French news editor for UM News in Congo.

From California to Louisiana to Iowa, United Methodists are responding with prayer, comfort for the grieving and renewed calls for advocacy against gun violence.
Violence