The United Methodist Committee on Relief has processed more than $17 million so far to help the people of Ukraine cope with the invasion by Russia, said its top executive during the United Methodist Board of Global Ministries’ fall board meeting.

At the meeting, held virtually Oct. 18-21, the agency announced plans for additional assistance for partners working in Ukraine and a $3.9 million increase in funding for U.S. conference disaster ministry programs in 2023. The last day’s agenda was devoted to reports to the board from various committees.

A name change for National Justice for Our Neighbors also was revealed and participants heard passionate speeches touting the global mission of The United Methodist Church.

“The response to the Russian invasion of Ukraine (including) funding from the UMC and other donors has been phenomenal,” said Roland Fernandes, top executive of Global Ministries and the United Methodist Committee on Relief. Through the end of August, he said, $23.2 million had been received. 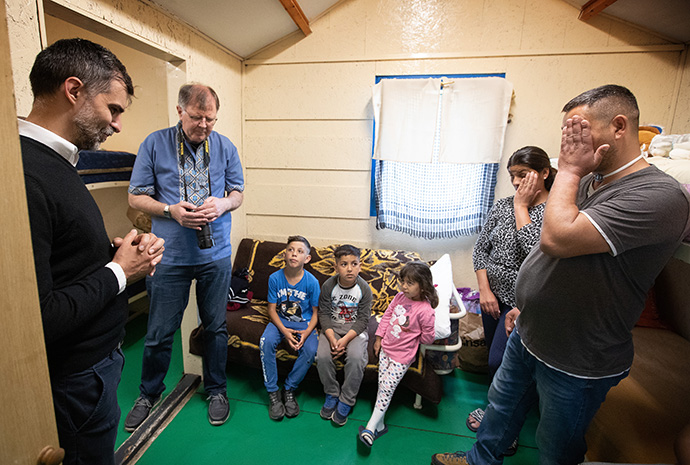 The Revs. László Khaled (left) and Üllas Tankler (second from left) pray with the family of Robert, Renatta and their children in the small cabin they share at the United Methodist Dorcas church camp in Debrecen, Hungary, in May. The family was staying after fleeing the war in Ukraine. Khaled is superintendent of The United Methodist Church in Hungary and Tankler is the European/Eurasian representative of the United Methodist Board of Global Ministries. File photo by Mike DuBose, UM News.

More than $640,000 in additional aid was approved during the meeting for expenses including providing legal representation to refugees from the war who are now in Poland, construction of “tiny homes” for people living in shelters in western Ukraine and providing food, hygiene, winterization kits and evacuation assistance.

About 1.4 million people have asked for temporary protection in Poland, where many of the 7.1 million refugees from the Ukraine war have fled. More than $192,000 in grant money will go to the European Lawyers in Lesvos organization.

“The purpose of the project is to provide high-quality legal information and assistance to refugees arriving from Ukraine in order to help them obtain temporary protection, answer their legal queries and navigate the legal procedures in Poland,” according to the grant request.

Other grants approved during the meeting include:

Individual grants were as low $1,500, to help fund a national coordinator for ministry of justice and social rights position in Colombia. Other grants were worth much more, such as a $1.4 million grant to support long-term recovery from March tornado damage in the North Texas Conference.

During the board meeting, the new name of National Justice for Our Neighbors was revealed by co-executive directors Melissa Bowe and Alba Jaramillo. The United Methodist immigration ministry will now be the Immigration Law and Justice Network.

“It captures precisely what we do,” Bowe said. “The concept here is a new day. We want to feel like this is a new day for our clients. When you walk into our door, there's possibility, there's hope, there's joy.”

The ministry provides free or low-cost immigration legal services to low-income immigrants, refugees and asylum seekers. It also advocates for immigrant justice and offers education to communities of faith and the general public. 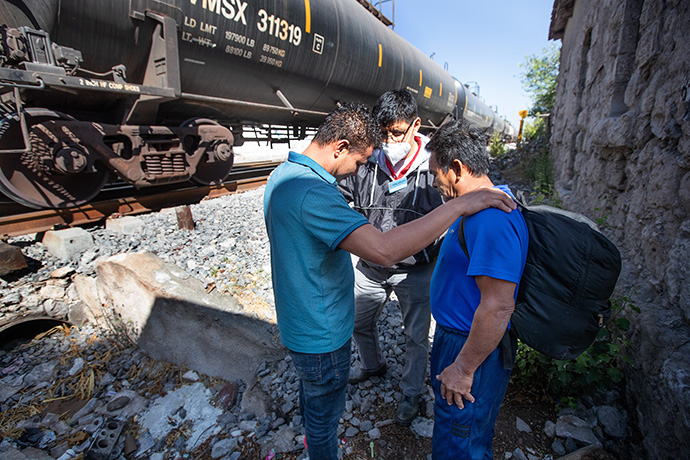 The Rev. Joel Hortiales (center) prays with migrants Darwin (left) and Santiago as they wait for a southbound train to pass behind the Oasis en el Medio del Camino migrant shelter in Apaxco, Mexico, in April. Hortiales, a United Methodist missionary and director of Hispanic-Latino ministries and border concerns for the California-Pacific Conference of The United Methodist Church, was part of a fact-finding ministry that visited the shelter, which is operated by the Methodist Church of Mexico with support from the United Methodist Committee on Relief. File photo by Mike DuBose, UM News.

In another matter, the board approved a raise in the dollar amounts of grants that members of the Global Ministries staff can authorize without involving the board of directors.

Both threshold changes were overdue because they hadn’t risen since at least 1991, said Tyler Ward, manager for mission appropriations and operations at Global Ministries. The higher dollar limits make sense in light of rising prices, he said. 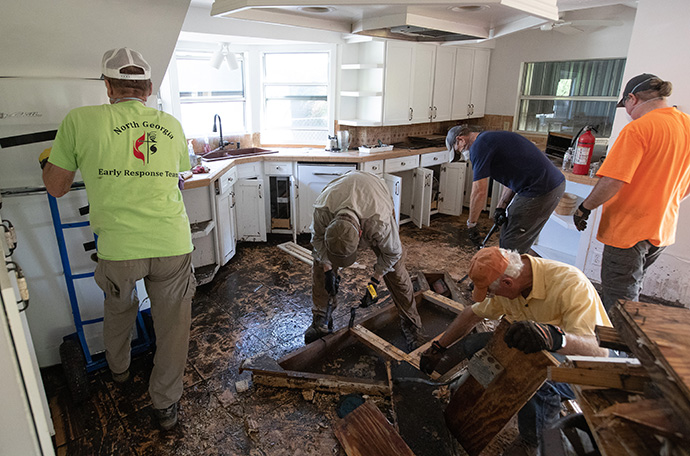 Members of a volunteer team from the North Georgia Conference of The United Methodist Church clean out a home in Fort Myers, Fla., on Oct. 5, after it was flooded by Hurricane Ian. The United Methodist Board of Global Ministries approved a $2 million increase in funding for U.S. conference disaster ministry programs in 2023. File photo by Mike DuBose, UM News.

Sparked largely by the war in Ukraine, Global Ministries and UMCOR had donations and receipts of $59.1 million in the first eight months of 2022. That’s up from $30.2 million in the same period last year. Donations to the Advance fund, which allows givers to designate their money to go to a specific cause, jumped to $47.2 million in gifts as of August 2022. This is $29.5 million more than gifts received in August 2021.

“For the UMCOR Advance project, granting has increased to $15.2 million through August compared to the prior year,” said Mike Gurick, chief financial officer of Global Ministries and UMCOR.

In addition to the Ukraine war, Gurick said recovery from the Haiti earthquake, tornadoes in Tennessee and Kentucky and other disasters affecting conferences in New Jersey, Michigan and western states have all sparked donations to UMCOR.

“The abundance of disasters and their severity has called us to increase the volume of emergency solidarity grants, while at the same time increasing the magnitude of both relief and recovery grants,” it was reported in the UMCOR Program Board Report. “This expanded granting activity, throughout all program areas, has forced us to look carefully at embracing new systems to enhance both the effectiveness and efficiency of our grant-making processes.”

New York Area Bishop Thomas J. Bickerton, president of UMCOR and the Council of Bishops, alluded to the Global Methodist Church during the second day of the board’s meeting. The new denomination was launched earlier this year by theological conservatives who are attempting to attract congregations away from The United Methodist Church.

“There is absolute, absolute, exceptional, undeniable reasons to be a United Methodist,” said Bickerton. “We need to stand up and proclaim who we are as a church. I grow very weary as an episcopal leader about false narratives that throw this denomination under the bus, when, in fact, this board represents the most tangible way for us to spread scriptural holiness across the land.

“I find that to be biblical, theological and compelling, and I believe that we on this board should not be silent about the manner by which this church is engaged in global mission across the world.

“We are the global United Methodist Church.”