The people at Tucson’s St. Francis in the Foothills United Methodist Church love having Francisco Perez Cordova around. But for his sake they’d love to see him go, provided he first gets assurance that he won’t be deported.

Since Sept. 25, Perez Cordova — a 37-year-old construction worker — has lived fulltime at the church, accepting its offer of sanctuary from a deportation order.

He sleeps in an office-turned-bedroom, and spends his days repairing things on the church campus. His wife and five children visit regularly, but live apart.

“When they have problems, I cannot go and help them,” Perez Cordova said by phone. “That is my big concern.” 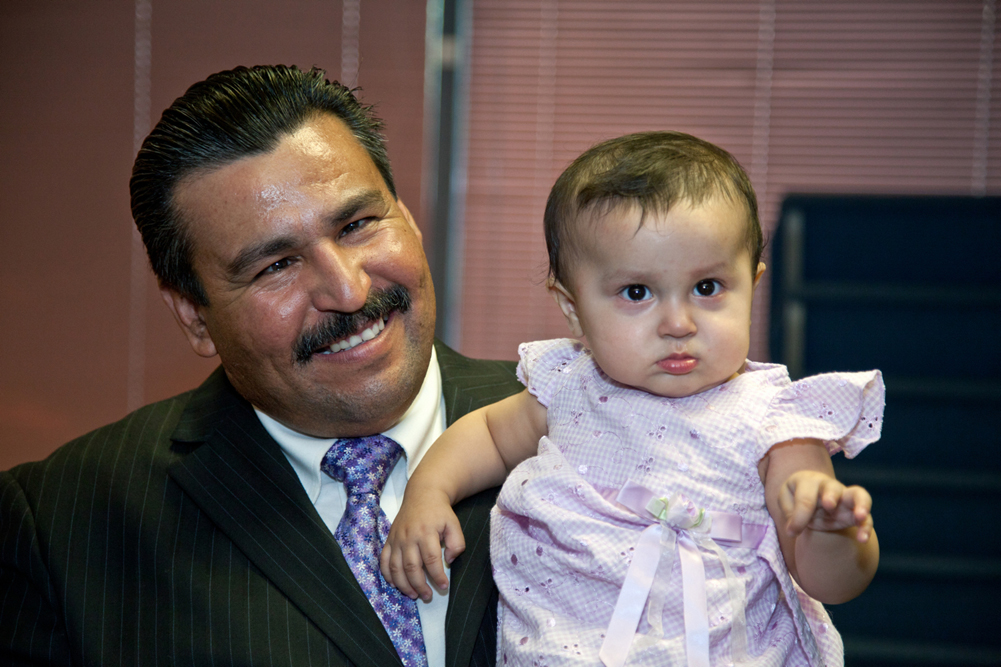 The Rev. Jim Wiltbank, pastor of St. Francis in the Foothills, was cheered last month when President Obama issued an executive order that promises at least temporary protection from deportation for nearly 5 million immigrants.

But the order hasn’t yet been implemented, and faces resistance from Republicans in Congress and from states that have filed suit, claiming Obama overreached. Perez Cordova could get relief through prosecutorial discretion, but that hasn’t happened either.

So he’s still at the church fulltime.

“Bottom line for me is we’d love to have Francisco home by Christmas, but we just don’t feel comfortable letting him go,” Wiltbank said.

“It’s a critical, prophetic way that churches can stand together and support our immigrant brothers and sisters,” said Kristin Krumpf, director of organizing for the United Methodist Board of Church and Society.

Los Angeles Area Bishop Minerva Carcaño, a leader of The United Methodist Task Force on Immigration, said sanctuary is on the agenda for a conference call later this week with rapid response teams on immigration. The teams are from various annual conferences.

She too is encouraging United Methodist churches to offer sanctuary or support churches that offer it.

“There are six and a half million people that aren’t covered by that (Obama) order,” she said. “There’s a definite need to continue to help them.”

The modern sanctuary movement had its highest profile in the 1980s, when hundreds of U.S. churches took in Central American refugees who were fleeing civil war and other violence but had not been granted political asylum by the United States.

In 2006, an undocumented immigrant named Elvira Arellano made headlines by taking refuge, with her young son, in Chicago’s Adalberto United Methodist Church. After a year, she left to speak nationwide for immigration reform, and was arrested and deported to Mexico.

This year has seen the emergence of Sanctuary 2014, a grassroots effort of faith and immigration reform groups that has had coordination and technical support from Church World Service.

The Rev. Noel Anderson, national grassroots coordinator for Church World Service, said the spark was the May decision by Tucson’s Southside Presbyterian Church to offer sanctuary to Daniel Neyoy Ruiz. Southside had been active in the 1980s sanctuary movement, but this was the first time in 30 years the church had harbored an immigrant.

Ruiz — who came to the United States 14 years ago, has no criminal record, and is his family’s breadwinner — did get a  stay of deportation from the federal Immigration and Customs Enforcement (ICE) in June, after a lobbying campaign on his behalf.

Currently, Sanctuary 2014 is highlighting eight cases where churches are offering sanctuary, including that of Perez Cordova and St. Francis in the Foothills. A handful of other United Methodist churches are among those listed on the Sanctuary 2014 website as willing to offer sanctuary.

One is Christ’s Foundry United Methodist, a Hispanic congregation in Dallas. The Rev. Owen Ross, pastor, confirmed that the church is ready “under the right circumstances” to harbor someone in danger of imminent deportation.

The church has no shower, but is committed to figuring that out if the need arises.

“We’re ready to get creative,” said Ross, who went to jail earlier this year in a Washington, D.C., protest of deportations, and whose church has had members and friends deported.

St. Francis in the Foothills, which was part of the 1980s sanctuary movement, offered support to Southside Presbyterian and held meetings about whether to declare its willingness to be a sanctuary church. About a week before a vote was scheduled on this question, church leaders learned of Perez Cordova’s case.

That turned the decision into something concrete. On Sept. 21, the church voted overwhelmingly both to declare itself a sanctuary church and to take in Perez Cordova.

Perez Cordova came to United States in 1996, at age 18. He has worked for years for the same construction company and has no criminal record, Wiltbank said.

In 2009, according to local news reports, Perez Cordova went to help when his brother-in-law was burglarized. Deputies arrived to investigate, and called in Border Patrol agents, who questioned and detained Perez Cordova about his status, starting a long, twisting legal process that yielded a deportation order.

Advocates at St. Francis in the Foothills and elsewhere are confident that Perez Cordova, as the father of U.S.-born children who do have legal status, is eligible for relief under the Obama executive order. But getting relief that way could take months. Meanwhile, his backers are pushing for officials to use prosecutorial discretion and close his deportation case.

ICE’s Phoenix office did not return a call requesting comment.

Wiltbank said the church has put a trailer on its campus so that Perez Cordova can have private visits with his family. The church is holding regular prayer vigils for him, and is paying his family’s rent and utilities until he can get back to work.

Contributions have come in from other churches to help cover expenses, and the family has been anything but a burden, according to the pastor.

“The kids are incredible,” Wiltbank said. “They’ve brought joy to our church.”

Perez Cordova said the church has treated him, his wife and their children “like family” and he has tried to compensate by doing any repairs he can.

Wiltbank noted that Perez Cordova’s work has included repairing bicycles for the church’s ministry to refugees who have arrived in Tucson.