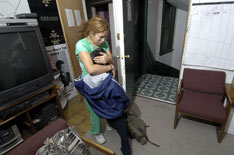 Arellano hugs her 8-year-old son, Saul, while living in sanctuary together. A UMNS file photo by Paul Jeffrey.

Elvira Arellano, an illegal immigrant recently arrested and deported to Mexico, puts a "human face" on immigration in a high-profile case that United Methodist leaders say will force Congress to see the issue in terms of justice and mercy.

Her Aug. 19 arrest has separated Arellano from her 8-year-old son, Saul, who was born in the United States and is a U.S. citizen. Arellano is a member and lay leader of Adalberto United Methodist Church and had taken sanctuary in the Chicago church from Aug. 15, 2006 to Aug. 16, 2007. She decided to leave the church to speak nationwide for immigration reform and was arrested days later.

Since her arrest, Saul has lived in Chicago with the Rev. Walter Coleman, pastor of the church, and his wife.

Coleman said Arellano is "free and secure in Mexico and continuing the struggle for the 4 million U.S. citizen children who are losing one or more parents" due to deportation. Coleman and his wife plan to take Saul to Mexico to visit with his mother, who will decide about Saul's future.

In the weeks after her arrest, United Methodists leaders have offered their prayers and support for Arellano and her family and have spoken out for a U.S. immigration policy anchored in the sanctity of the family.

The principles of immigration reform supported by the church include a pathway to citizenship for all undocumented migrants, full protection for migrant workers and the reuniting of families separated by migration.

"Her choice to love and care for her child, thereby resist deportation, has reframed the undocumented immigration debate from narrow questions of legality to the greater human questions of justice and mercy," said Bishop Joel N. Martinez, espicopal leader of the San Antonio area and president of the United Methodist Board of Global Ministries.

Harsh feelings on both sides of the immigration issue have swirled in the United States since Congress failed to pass a comprehensive immigration reform bill before recessing for the summer. As lawmakers prepare to reconvene Sept. 4, the issue is already starting to reignite debate.

"The backlash against immigrants has been fierce," said Bill Mefford, staff member of the United Methodist Board of Church and Society, the church's social action agency. "To further poison the atmosphere, there is currently before the Senate legislation (S. 1984) which will build more fences, build more detention centers with limitedregulations and increase arrests and deportations such as the recent deportation of Elvira Arellano."

Since 1980, The United Methodist Church has issued statements of support for immigrants and refugees declaring that "being an undocumented person is not a crime."

"All migrants are children of God and all churches are urged to welcome and advocate on their behalf," said Mefford. 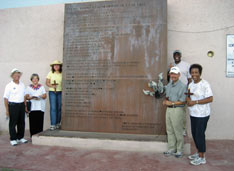 United Methodist bishops flank amemorial to those who have died crossing the desert from Mexico into Arizona. A UMNS photo courtesy of Bishop Minerva Carcaño.

Many within the church disagree and instead call for increased militarization of the border, use of local law enforcement to enforce federal immigration laws and more deportations and detentions.

The denomination's stance has consistently upheld public policy aimed at preserving families and strengthening family life, according to church officials.

"One thing we should not lose sight of is that Elvira Arellano represents thousands of families who face the same terrible situation every day. Some of these families are having parents deported on this very day," said Bishop Minerva Carcaño, who leads the church in the Phoenix area.

Carcaño and members of the Western Jurisdiction College of Bishops traveled in July across the border between Arizona and Sonora, Mexico, "to immerse ourselves in the experience of the immigrant journeying into the United States." (See commentary by Bishop Carcãno) "What we saw was both disturbing and hopeful," the bishop writes.

"As a United Methodist Christian, Elvira's witness and struggle is part of our witness," said Jung. "Her risk-taking and courage is a statement of faith and conviction. The church is called to advocate for justice and full human rights in every immigrant community of every country."

Welcoming the Migrant to the U.S.