The Rev. F. Thomas Trotter is being remembered as a champion of higher education for the underprivileged who laid the foundation for Africa University, the first United Methodist university in Africa. He died on July 26 at the age of 93.

“Dr. Trotter was a visionary and had the head and heart that moved the United Methodist Board of Higher Education and Ministry staff to consider the appeal from the African bishops to build a university for all of Africa,” said James H. Salley, top executive of the Africa University Development Office.

United Methodist Bishop Emílio J. M. de Carvalho, who served as the first chancellor of Africa University, said, “Dr. Trotter will always be remembered for his firm stand with regard to higher education for the underprivileged, and Africa will always be grateful to his vision that became a reality. May God receive him in his glory, as a faithful servant of his kingdom.”

Trotter was the top executive of the Board of Higher Education and Ministry from 1973 to 1987. He was instrumental in creating the Office of Loans and Scholarships, which opened the door for more United Methodist students through financial aid.

“I will always treasure being hired by Dr. Trotter in December 1985 as the associate general secretary for the Office of Loans and Scholarships, and for working with this visionary leader, scholar and servant of God,” said Angella Current-Felder, retired.

Trotter, working with staff at the Board of Higher Education and Ministry, provided the leadership for the Rev. Roger Ireson, his successor, to take the Africa Initiative to the 1988 General Conference in St. Louis, Salley said. 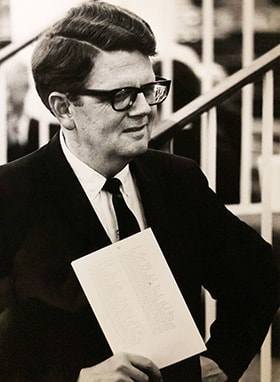 “He moved the Africa Initiative through the bureaucratic process so that it was adopted at the General Conference of 1988 as he left office, allowing us to begin the work immediately of its establishment,” Ireson said.

“He had the gift of personally focusing on a conversation so that a person felt heard and appreciated, which is a great gift for a church leader. He accomplished much for education and the church and we shall miss him,” Ireson added.

Terri Hiers, former executive director of the Board of Higher Education and Ministry’s Office of Interpretation, called Trotter, “a giant in Methodism.”

Hiers recalled when Liberia Bishop Arthur Kulah and Angola Bishop de Carvalho got up at a board meeting in Nashville and challenged the board to create a university in Africa.

“Trotter and Bishop Herbert Skeete, then president of the board, did not miss a beat; they pivoted on a dime and jumped right on it,” she said.

“I don’t care if you had an eighth-grade education or a post-doctoral degree, you could read his writings and gain so much from him. An editor in his or her’s lifetime meet very few like Tom Trotter. He was just an editor’s dream,” she said.

James T. Laney, the former dean of Candler School of Theology, president of Emory University and U.S. Ambassador to South Korea, was part of the site selection committee for Africa University.

“From my perspective, Tom was the key person who pushed the idea of inaugurating a United Methodist Church university in sub-Saharan Africa,” Laney said. The committee divided into three groups and Laney was part of the group that visited Harare and the mission at Old Mutare, which became the site of Africa University.

“In all these deliberations, Tom was judicious and wise, and above all, enthusiastic about the new university. To me, he was the true spark plug of the entire enterprise,” Laney said. “I seriously doubt the idea would have gotten off the ground had he not thrown his weight behind it and the power of his office as general secretary. I personally consider Tom as the ‘founder’ of the university — a true and enduring legacy.”

After leaving the Board of Higher Education and Ministry, Trotter served as president of Alaska Pacific University (1987-1995) and then interim president of Claremont School of Theology (1999-2000). He remained a member of Claremont’s Board of Trustees until his death.

Trotter wrote regularly for newspapers in Nashville and Anchorage and authored four influential books: “Jesus and the Historian,” “Loving God With One’s Mind,” “Politics, Morality and Higher Education,” and “God Is With Us.”

The Rev. Greg Bergquist, acting top executive at the Board of Higher Education and Ministry, said Trotter left a lasting legacy at the agency.

“His work to expand our educational networks and financial aid programs has helped thousands of United Methodist students make their dream of higher education a reality,” Bergquist said.

The Rev. Kim Cape, who retired in June as secretary of the higher education and ministry agency, said it is hard to overstate Trotter’s influence on education.

Claremont School of Theology president, the Rev. Kah-Jin Jeffrey Kuan, said getting to know Trotter was “an incredible honor of my life.”

“With his passing, The United Methodist Church has lost a giant in the denomination, and Claremont School of Theology has lost a former colleague, dear friend and supporter.”

Trotter is survived by many close friends, colleagues and family, including his wife of 66 years, Gania Demaree Trotter; their three daughters, Ruth Trotter, Tania Trotter Batson and Mary Trotter; and grandchildren.

Gilbert is a news writer for United Methodist News Service. Contact her at (615) 742-5470 or [email protected]. The United Methodist Board of Higher Education and Ministry in Nashville, Tennessee, and Claremont School of Theology in Claremont, California, contributed to this story.

United Methodist churches played a part in helping to share health and prevention information, as well as work to prevent the stigma Ebola survivors often face.
Mission and Ministry