United Methodist women in Côte d'Ivoire have seen their dream of opening a processing plant for a popular local dish become a reality.

The women will be making attiéké, a traditional Ivorian dish made from cassava semolina (flour) that has become highly regarded beyond the borders of Côte d'Ivoire and Africa. It is similar in texture to couscous.

“This is an opportunity to produce attiéké — in quantity and quality — a highly valued local commodity that could contribute to the national economy,” said Bishop Benjamin Boni of the Côte d’Ivoire Episcopal Area who joined the women in celebration on Jan. 11.

Members of United Methodist Women representing the 25 districts of the Côte d’Ivoire Conference of The United Methodist Church gathered at the entrance of Attingué, a village in the commune of Anyama (30 kilometers north of Abidjan), where they laid out a vast piece of land as a temple for the occasion.

To the rhythm of a brass band, the women danced with white handkerchiefs in their hands and shouted with joy. They joined the bishop and his delegation to cut the orange, white and green ribbon that lined the gate of the new building.

The delegation included Lorrie King, director of Sustainable Development for the United Methodist Committee on Relief, as well as representatives of the Ivorian government and the chieftainship of surrounding villages. UMCOR contributed a $200,000 grant to help fund the project. 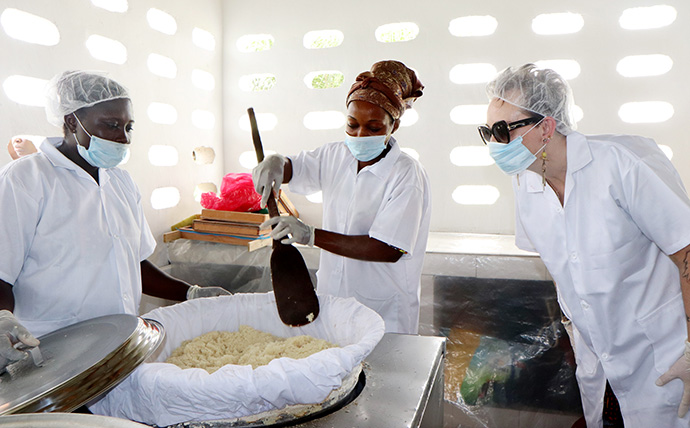 Lorrie King (right), director of Sustainable Development for the United Methodist Committee on Relief, watches as Akossi Lobochi Rosine (left) and Ayibé Carine make attiéké at a new processing plant in Anyama, Côte d'Ivoire. Attiéké is an Ivorian dish made from cassava flour that is similar in texture to couscous. Photo by Isaac Broune, UM News.

A new green building on 400 square meters of land houses the semi-mechanized production unit. The opening of the plant is a tangible result of the conference’s focus for the past two years on the theme “Church and Food Security: You Give Them Something to Eat” (Matthew 14:16).

As visitors passed through the heavy gate, a dozen smiling women wearing white gowns and hats showed the group how the plant operates. Some were busy unloading the truck packed with cassava tubers, while others peeled, washed and crushed them.

“The resulting paste is dewatered, sieved, dried and winnowed before being steamed in giant ovens to deliver the final product called attiéké,” said Jeannette Degrou, plant manager and lay leader of the Anyama circuit. “This production unit employs 20 women, and arrangements are being made to recruit non-United Methodists as well,” she said.

Boni praised the long-standing commitment of United Methodists to fight poverty, and he called on young men and women who are jobless to join the initiative.

“The Gospel of God’s grace that comes from the life of Jesus Christ, according to John Wesley, also includes a social dimension that consists of ministering to the marginalized and addressing economic disparities,” he said.

Simon Nathan Koffi, executive director of the United Methodist non-governmental organization le Réservoir de Siloé, helped implement the project, which begins with the harvesting of the cassava crop and ends with the marketing of the finished product.

“It is a vast project that brings together 2,500 United Methodist and non-United Methodist women. They will implement 160 hectares (395 acres) of cassava land in 16 ecclesiastical districts in order to produce 3,000 tons of cassava. This raw material will be processed by two production plants in Attinguié (South) and Moronou (East),” Koffi said.

Work on the Moronou plant is expected to begin next month with the opening slated for May.

The production plants will work together with the Tabitha Hope cooperative, which was created in June of 2019 to bring together the women of the Côte d’Ivoire United Methodist Church involved in the attiéké and rice projects (a similar project in some rice-friendly districts).

Sara Ahouassa, president of the co-op and United Methodist Women in the Abobo District, said the project gives the women purpose.

“One of our members has sent her three daughters, aged 20, 26 and 30, to work in this production unit. Some of the women who work in the farms or work in the production unit buy back the finished attiéké to sell in the villages, thus turning a page in their lives,” she said.

King said the women are role models for other United Methodists.

“By coming together to determine what is possible at the community level, by strengthening your social network, you are setting an example for all United Methodist women around the world,” King said, noting that the women were full of pride and self-confidence.

She spent the afternoon listening to women express their needs and aspirations at Galilée Plateau Dokui United Methodist Church. The next day, she and Boni visited a water, sanitation and hygiene (WASH) project in Monga, Alépé.

“We've been waiting a long time for (the attiéké) project to come to fruition. Thank you for not making us dream in vain,” said Michel Kouakou Kouakou, divisional officer of Anyama. 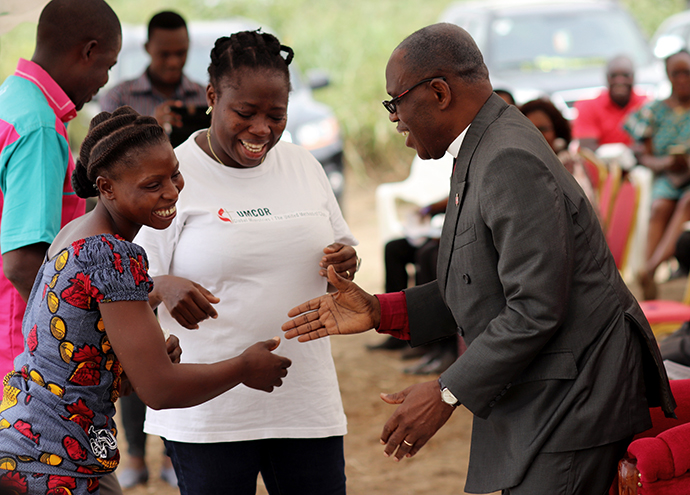 He offered the beneficiaries advice as they look to the future.

All of the speakers praised those who contributed to the creation of the production plant.

The total cost of the project was $350,000, with the remaining $150,000 coming from districts and individuals. In addition to the financial grant, UMCOR ensured that the project was community-driven, overseeing its planning and implementation.

“In recent years, the agency has invested more than $779,000 in a variety of humanitarian assistance projects to improve the lives of women and children in Côte d’Ivoire,” King said.

After the visit to the premises and before giving the final blessing, Boni invited those present to eat healthy.

“It is time to consume good attiéké,” he said.

Nearly 11,000 pounds of supplies were collected by 23 United Methodist churches with supplies going to UMCOR which will distribute them in Haiti, Ukraine and to parts of the U.S. to assist with Hurricane Ian relief.
Disaster Relief