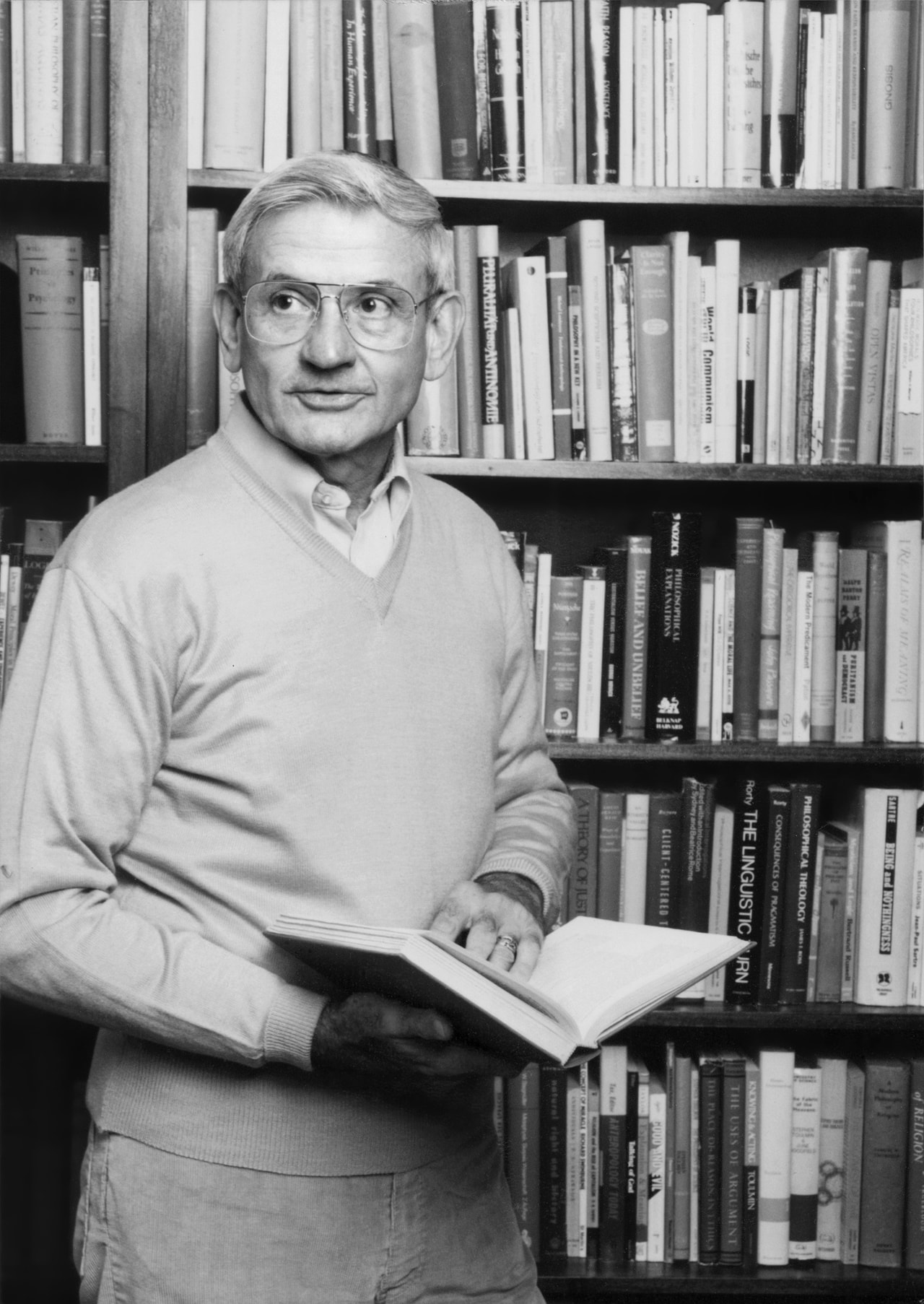 The Rev. Schubert Ogden, a longtime professor at Perkins School of Theology, died June 6 in Louisville, Colorado, near Boulder and Denver. He was 91. Photo from Wikimedia Commons, licensed under the Creative Commons Attribution-Share Alike 3.0 Unported license.

But at Perkins School of Theology, Ogden was known for the tough love he showed pastors-in-training and other seminarians. He demanded as much clarity and depth in their papers and classroom debates as they could muster.

“I’ve had generations of Perkins students tell me, ‘He taught me how to think,’” said the Rev. Charles Wood, a former colleague at Perkins.

The Rev. Lovett Weems was one of those students in the late 1970s.

“‘Intimidating’ is not too strong a word,” Weems said of Ogden. “But I don’t mean that in a negative sense. He had high expectations.”

Ogden died June 6 in Louisville, Colorado, near Boulder and Denver. He was 91.

Among those remembering him with gratitude is the Rev. Philip Devenish, one of his Perkins doctoral students in the 1970s. Devenish had been studying at Yale Divinity School when he read a scholarly article by Ogden and decided he’d found his theological mentor.

Devenish and his wife, Phoebe, had never lived outside the northeast but moved to Dallas so he could study with Ogden at Perkins, part of Southern Methodist University. His admiration only grew.

“You almost can’t overestimate his importance, and the significance of his work,” said Devenish.

Born in Cincinnati, Ogden would study at Ohio Wesleyan University, Johns Hopkins University and the University of Chicago Divinity School.

His doctoral dissertation at the University of Chicago won the school’s award for best dissertation in education, sociology or theology and was published by Harper and Brothers as “Christ Without Myth,” in 1961.

The book was Ogden’s response to the German theologian Rudolph Bultmann, with whom he would have a close association. Ogden also was influenced by Charles Hartshorne, a philosopher he studied with at The University of Chicago.

“(Ogden) is most noted among theologians for a kind of blend of the existential theology of Rudolph Bultmann and the neo-classical metaphysics that comes out of Charles Hartshorne,” Wood said.

Devenish took his own crack at explaining Ogden’s work: 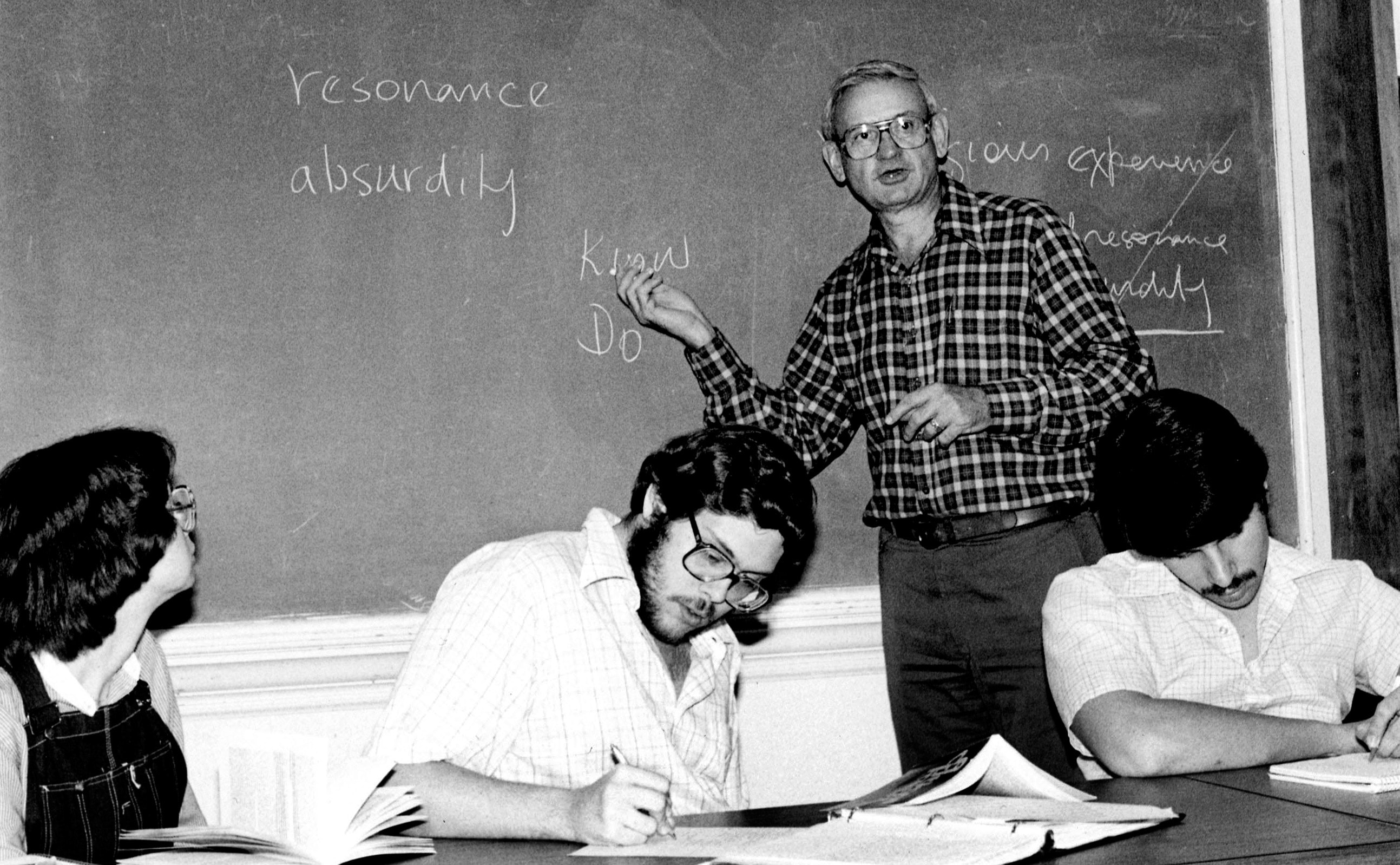 The Rev. Schubert Ogden leads a class at Perkins School of Theology in Dallas in this undated file photograph. Photo courtesy of Bridwell Library Special Collections.

In 1956, Ogden — still working on his doctoral dissertation — joined the Perkins faculty. As his star rose, other seminaries tried to hire him. Ogden did leave in 1969 to become University Professor of Theology at the University of Chicago, but returned to Perkins and SMU in 1972. Two years later, he became director of the graduate program in religious studies. He retired from Perkins in 1993.

At Perkins, Ogden team-taught courses with John Deschner, and later with Wood and others. The professors often saw things differently, and Perkins’ leaders liked that.

“The idea being, you can’t get through the course simply by agreeing with the instructor,” Wood said. 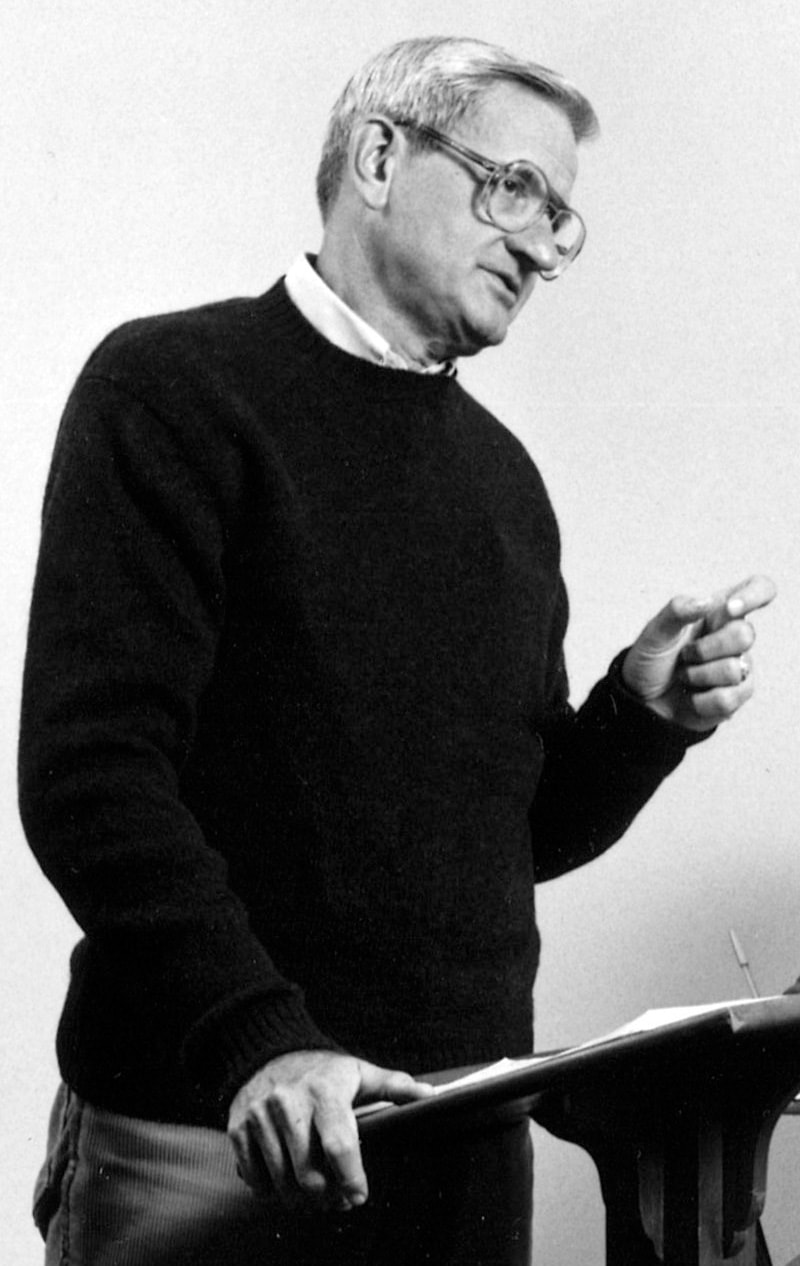 He added that having Ogden as a colleague was “a great gift,” and that Ogden didn’t try to win him over, but rather tried to help him perfect his own thinking.

“If I showed him something I’d written either pre-publication or after it was out, I would always get a detailed, two-or-three page set of notes,” Wood said.

Though a scholar through and through, Ogden in the 1950s was ordained as a deacon and then as an elder in the Ohio Conference. He and his late wife, Joyce, were active at Northaven United Methodist Church in their Dallas years.

“Schubert was a church-going person, sang in the choir, and was committed to The United Methodist Church and the local church,” Devenish said.

Ogden remained intellectually engaged and writing until very late in life. “Notebooks,” a book derived from notebooks he kept over decades as he read and responded to other theologians and philosophers and revised his own thinking, was published just last year.

Drew Theological School has digitized and made available Ogden’s notebooks. Ogden also is well represented on YouTube, where he’s featured in a series of American Scholars of Religion interviews. They reveal the formidable intellect that caused fear and trembling among Perkins students.

“He was fundamentally kind and caring, but he saw his vocation primarily as caring about the way students thought, caring about their theological formation, and he wasn’t cutting any corners with that,” Wood said.

Ogden is survived by sons Andrew and Scott and three grandchildren. A service is still being planned.

Claremont School of Theology planned to sell its Southern California campus and move to Willamette University in Oregon, but litigation setbacks have forced the United Methodist seminary to try to operate both places.
Theology and Education

Ask The UMC: What is Pentecost?

The Christian festival of Pentecost, on the 50th day after Jesus’ resurrection, celebrates the gift the Holy Spirit and birth of the church.
Mission and Ministry

Ask The UMC: What do we mean by resurrection?

United Methodists affirm the Christian belief in the resurrection of the dead. Resurrection is a form of new creation, not merely a resuscitation.