The Rev. Samuel J. Quire Jr., administrative assistant to the bishop in Liberia, has been elected a bishop by the delegates of the West Africa Central Conference. He will lead the Liberia Conference.

Eighty delegates — 20 each from Liberia, Nigeria, Sierra Leone and Côte d’Ivoire — are attending the conference.

On the fourth ballot, he received 50 votes out of 80 cast. To be elected, a candidate needed at least 60 percent of the vote.

“It is one thing to win an election and another thing to be a leader,” Quire said, after celebrations of his election. “I cannot be a leader alone. It is not a Samuel J Quire victory; it is a victory of the people called United Methodists.”

He pledged to work with everyone in the interest of the church. 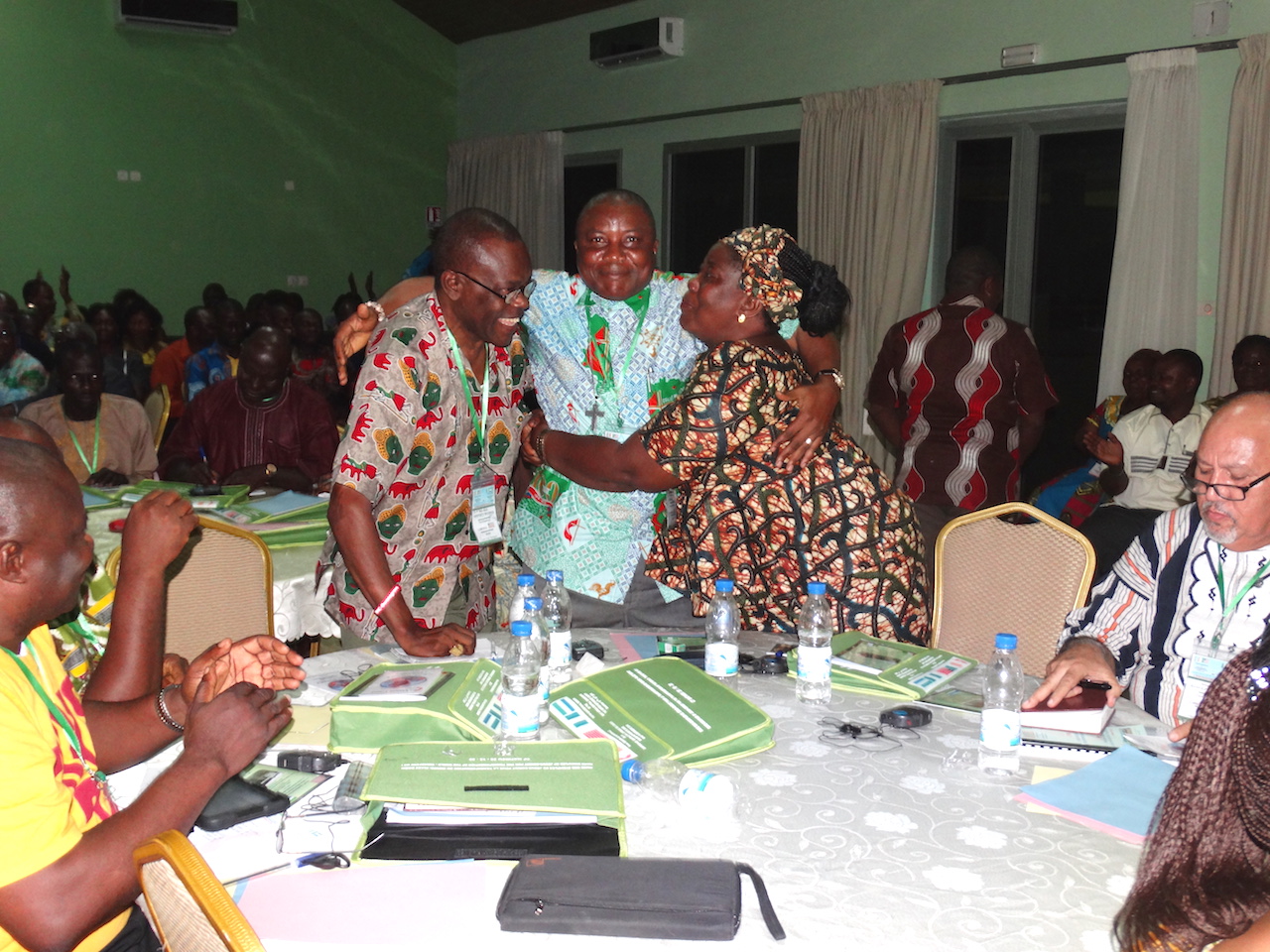 Bishop-elect Samuel J. Quire (center) celebrates with friends and family when he was pronounced bishop-elect on  the fourth ballot. Photo by Julu Swen, UMNS

Quire was among two episcopal candidates presented by the nomination committee. The other was the Rev. David Topkah, senior pastor of New Covenant United Methodist Church in Hamilton, New Jersey and a Liberia Conference member.

The Rev. Julius Julukon Sarwolo Nelson Jr., vice president and dean of student affairs at the University of Liberia, was nominated from the floor after central conference delegates overturned a Liberia Conference rule that barred divorced clergy from vying. That rule had earlier prevented Nelson’s candidacy. The Rev. James Labala, superintendent of the Gbarnga Mission Station and associate dean of the Gbarnga School of Theology, became a fourth candidate when he nominated himself.

By the second ballot, it was a two-man race between Quire and Nelson.

Church leaders offered prayers for peace and God’s direction before the election. The Council of Bishops representative at the meeting — South Carolina Area Bishop Jonathan Holston — told delegates that electing a leader of the church is a holy process.

“I ask that you ask the Holy Spirit to work in you,” Holston said. “Regard the ballot that you carry as a holy ballot.”

He also cautioned that the bishop to be elected was not just going to be a bishop of Liberia Area or West Africa but a bishop of The United Methodist Church.

Quire holds a Master of Divinity from West Africa Theological Seminary in Lagos, Nigeria, and a Bachelor of Theology degree from the Gbarnga School of Theology in Gbarnga City, Liberia.

Quire has served as pastor of Jasper Grant United Methodist, Ebenezer United Methodist Church  in Monrovia and was director of the Bishop Judith Craig Children’s Village.

He was elected as a clergy delegate to the 2004 and 2016 General Conferences, the 2004 West Africa Central Conference, and the 2005 All Africa Conference of Churches.

The United Methodist Church’s constitution says U.S. bishops get life tenure while allowing central conferences — church regions in Africa, Asia and Europe — to set the tenure of their respective bishops.

In the West Africa Central Conference, bishops are limited to 12 years in episcopal office.

Jusu is the communicator for the Sierra Leone Conference. Swen is a communicator in Liberia. News media contact: Vicki Brown, Nashville, Tenn., (615) 742-5470 or [email protected]