My memory of Miller McAllister United Methodist Church was shattered when I reached the Ganta United Methodist Mission Compound, the official grounds that host the church, which was established in 1926.

I struggled all that day trying to find the natural stone building of the church that represented a piece of the history of The United Methodist Church and of the community of Ganta.

Instead I kept seeing a cement-sprayed ash-gray structure.

The church was established in 1926 by Dr. George Way Harley from the United States. Harley was a member of the Edenton Street United Methodist Church in Raleigh, N.C. Attendance at worship usually is between 250 and 300.

The building of a church in Ganta was said to be the culmination of Harley's work in Liberia. It took many years to build the church because of a shortage of funds and pressing demands for other buildings.

The church was completed in 1950 and was named Miller McAllister Memorial United Methodist Church, after the largest contributors of funds to the building project, Charles Miller and Agnes McAllister. Miller was a devoted Methodist layman; McAllister was a gallant young missionary among the Kru people in Garraway in the 1890s. No one knows what the church was called before that.

Troubled, I decided to try to find out more. 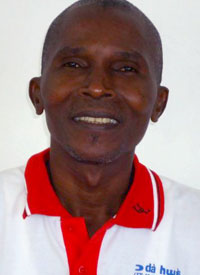 The Rev. James Z. Labala, district superintendent of Gompa District, who was once pastor of Miller McAllister, provided some background.

"I spent five years debating with my congregation on the need to preserve the building as it has been for the past 60 years, but they won the argument," he said. Others complained that the stones were uneven, he said, and took away the beauty of the church.

Members of the church wanted the church plastered with cement to conceal the natural stony look. He said the compromise decision was to spray instead of plastering with thick concrete.

"As a matter of fact, there are some members who want the church reroofed with zinc instead of maintaining the present clay tile roof," Labala said.

I approached a group of church members who were cleaning around the church before the funeral for the Rev. Herbert Zigbuo, a missionary for the United Methodist Board of Global Ministries who was superintendent of Ganta for many years. Labala had told me in our earlier discussion that Zigbuo was one of those who supported him in his drive to preserve this piece of history.

I asked indirectly why the church was sprayed with cement.

"We want to get rid of the old look of the church," a young lady said to me. "We are in modern days now," another responded.

Trying not to judge as wrongdoers those who I thought were in the process of defacing the church, I asked Labala, who is also a graduate of the University of Liberia with a degree in architecture, if the 60-year-old building posed any danger to the congregation.

As I wrote this piece, thinking I needed to capture the attention of those who would want to rescue this piece of history, I saw visible cracks in the walls and sunlight streaming through the roof, which suggested that water also pours down on the congregation during the rainy season.

Then I told myself that these folks may be right by saying "away with the old."

I also realized a new campaign of "generational change" was about to enter the church.

I decided to ask Labala about the cost of changing the roof to zinc, which is what some of his members were suggesting.

"It will cost us U.S. $14,000 to keep the clay roof and probably the same amount or more even if we decide to use zinc," Labala said.

The cost of preserving would be high but the impact of erasing it would be more devastating to those of us who value history so much.

But, I also realized that "away with the old" is not just a campaign of wanting to change the appearance of the Miller McAllister Memorial United Methodist Church. It is also a way to make sure that the church looks forward into the next century.

*Swen is a journalist, transitional justice worker, and former inquiry officer for the Truth and Reconciliation Commission of Liberia. He is director of communications for the United Methodist Church in Liberia.