Editor's Note: Two United Methodist gatherings that have much to do with carrying out the denomination's work over the next four years took place Jan. 15-20. This is a look at the first of those meetings, the Connectional Table. A report on the second, the 2013 Quadrennial Training Event for annual conference leaders, will be published Monday, Jan. 28 on www.umc.org.

The new Connectional Table - a United Methodist governing body that had expected to be defunct by now - met to organize for the next four years.

The gathering Jan. 15-17 in Nashville, Tenn., set the tone for the denomination's leadership for the next four years and may have offered a prelude to proposals that will go before the next General Conference in 2016.

The 59-member Connectional Table is where the denomination's ministry and money come together. It coordinates The United Methodist Church's mission, ministry and resources.

"I am actually surprised that we have a Connectional Table," Dakotas-Minnesota Area Bishop Bruce R. Ough, the new Connectional Table chair, told the group in his opening sermon. Ough also is bishop of The United Methodist Church missions in Laos, Thailand and Vietnam.

He noted that eight months after General Conference, many remain frustrated that too little in the church has changed.

The Connectional Table has the authority to distribute contingency funds.

During its January meeting, the group approved the release of $50,000 each year for at least two years to help with Hurricane Sandy recovery. The funds will support the "Generation Restoration" initiative, a proposal of the United Methodist Board of Discipleship's Young People Ministries and the Greater New Jersey Conference. The initiative will use a coordinating team of United Methodist young adults to connect thousands of youth and young adults with recovery efforts in New Jersey, New York, Maryland and likely West Virginia.

Ough was speaking to a different group of leaders from those who served on the Connectional Table in 2008-2012.

Thirty-nine of this Connectional Table's members are new to the body. Among the new members are a number of lay people and clergy who were critics of the body's 2012 restructuring proposals. At the same time, some of the returning and new members were strong proponents.

Nevertheless, the gathering this month was far more collegial than the Connectional Table's meeting before General Conference in March, when discussion revealed a body deeply divided over some of its proposals.

As outlined in the Book of Discipline, the denomination's law book, Connectional Table membership comprises the chief executives of the 12 general agencies and most agency presidents, who usually are bishops.

The body also includes 21 clergy and laity elected by the seven U.S. jurisdictions and one each from the seven central conferences in Africa, Europe and Asia. Representatives from each of the denomination's five official racial and ethnic caucuses serve, as well as one youth and one young adult from the United Methodist Division on Ministries with Young People.

Ough said the Connectional Table's central tasks are to listen closely to what's happening in the denomination and to align all the general agencies, bishops and other denominational entities to work toward the same ends.

Those ends, he said, include vital congregations, a more authentically global church and the General Conference-approved four areas of focus: global health, ministry with the poor, church growth and leadership development.

The Rev. Gil Rendle, United Methodist elder and longtime church consultant, addressed the body about vital congregations. He defined a vital local church as one that is connected to the environment of its own mission field. 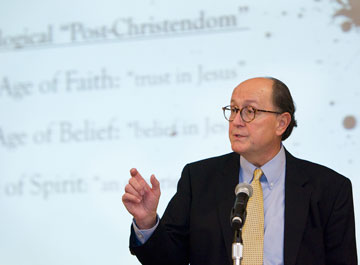 Rendle, a senior consultant with the Texas Methodist Foundation in Austin, stressed that there is no single path to vitality.

Still, he noted denominational research in the United States has shown vital congregations tend to share some common characteristics such as small groups, effective lay leadership and topical preaching.

He also cited research from the Hartford Institute for Religion Research that found one of the variables that correlates directly with congregational growth "is a purposefulness of the congregation's ministry and the clarity of its identity." In other words, he said, churches that clearly are theologically conservative tend to grow and churches that clearly are theologically liberal tend to grow. It's churches in the middle that often struggle.

To foster vibrancy, he suggested, the Connectional Table should see its role as brokering conversations across the church and getting "the right legs under the right tables addressing the right questions."

He challenged the group "to connect what God is already doing."

The Connectional Table began discussions on the worldwide nature of the church - work referred to it by the 2012 General Conference.

About the Connectional Table

At the same time, many United Methodists argue that there still is not parity between U.S. jurisdictions and the central conferences in Africa, Europe and Asia. A 2011 report by the Committee to Study the Worldwide Nature of The United Methodist Church criticized the church as too U.S.-centric.

Betty Katiyo of the Zimbabwe West Annual (regional) Conference put it another way. She asked the Connectional Table: "Will we be a truly global church or a U.S. church with a few mission outposts?"

Katiyo, associate conference secretary and the first lay speaker at General Conference from a central conference, was invited to share her perspective. She said the United Methodists in Africa can offer more financial support than they now do to the church.

"My opinion is that the church in Africa is not as poor as it is portrayed," she said. "We all have to contribute. If we don't contribute, it becomes very difficult to have a voice (in church decision-making)."

She also encouraged the Connectional Table to revisit the idea of creating new regional bodies in North America, Africa, Asia and Europe/Eurasia to focus on regional church issues and take pressure off General Conference. In 2009 and early 2010, voters at annual (regional) conferences rejected constitutional amendments that would have formed similar regional structures.

"The General Conference, to me, should be the platform where our worldwide nature is visible," she said. "We spend too much time on U.S. issues. If anything, it should be time to focus on issues of a global nature."

Ough said he already has received a flurry of emails in January saying certain issues must get before the Connectional Table.

Some United Methodists have asked the Connectional Table to address the deficiencies of the body's previous restructuring proposals and begin preparing new proposals for the 2016 General Conference.

"Any such proposals born of fear, frustration, anger, power or just plain weariness with the status quo are not likely to reflect much Holy Spirit imagination or inspire much human imagination and trust," Ough warned the group.

He also received correspondence from DreamUMC, a United Methodist group that arose out of the 2012 General Conference, that requested that the Connectional Table publicly release a draft of any church restructuring proposal by Jan. 31, 2015, more than a year before the 2016 General Conference.

"We certainly would honor their request that the whole church have the opportunity to be in conversation about any proposed restructuring," he said.

Ough said committees on the Connectional Table would be looking at vital congregations and the church's worldwide nature in the coming months. He also expected to invite other United Methodists to be part of some of those discussions.

It is too soon to predict what form - if any - proposed changes might take. But it was evident that Ough at least has not given up on the hope of a transformed denomination.

"Business as usual is not only unsustainable in The United Methodist Church," Ough said in his opening sermon. "It is antithetical to the unlimited imagination God has for our movement."

United Methodists alternately expressed fear and contentment with the U.S. Supreme Court decision released June 24 that holds there is no longer a federal constitutional right to an abortion.
Connectional Table

The United Methodist leadership body that coordinates denomination-wide ministries is looking to shrink its size and become more global in membership.
Global Health

The Connectional Table, which acts as a church council for the denomination, boosts United Methodist efforts to get people around the globe inoculated against COVID-19.