TAMPA, Fla. (UMNS) - Months before the 2012 General Conference, delegates to The United Methodist Church's top lawmaking body got a hint of the debate to come regarding restructuring the denomination.

More than 300 delegates, communicators and agency staff gathered Jan. 19-21 for the Pre-General Conference News Briefing at the Tampa Convention Center, where discussions of the proposed changes dominated conversation.

The main piece of legislation - the result of the multiyear Call to Action process - would consolidate nine of the church's 13 general agencies into a new United Methodist Center for Connectional Mission and Ministry under a 15-member board.

The board would be appointed by and accountable to a 45-member advisory board called the General Council for Strategy and Oversight, which would replace the Connectional Table that presently coordinates the denomination's mission, ministry and resources.

Essentially, the proposal would reduce agency boards now governed by more than 500 people to a group of 60. The legislation would also allow the board of the newly created center to redistribute up to $60 million toward funding theological education, recruiting young clergy and fostering vital congregations - about 10 percent of the amount presently budgeted for general church operations.

An overarching question for many at the briefing: Will the reorganization achieve its goal of promoting more vital congregations or have the opposite effect? 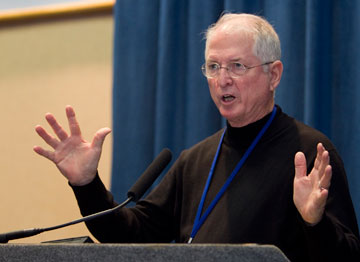 Jay Brim discusses the legislation on church restructuring. Brim is lay leader of the denomination's Southwest Texas Annual (regional) Conference and a member of the Connectional Table.

"We do not presume that what we are presenting is perfect by any means," said Jay Brim, who chairs the Connectional Table's legislative committee. "It is a proposal to move us toward change, and these changes, we hope, will be a significant step forward for the church."

Brim, lay leader of the Southwest Texas Annual (regional) Conference, said the denomination's 13 current general boards are "in a constant push to make sure that local churches and annual conferences know who they are, what they have to offer and how to get it from them."

"What we're trying to create out of this cacophony is a simple structure that everybody can identify without removing anything we currently have," he said. "Our hope is that we can find a better way to offer our services at the general church level down to local congregations and annual conferences."

Even before the Connectional Table devised its restructuring legislation, 10 of the agency boards were also developing their own legislation to shrink their board membership. This followed an operational assessment by consultants that found most agencies were too big and met too infrequently to provide accountability.

The Council of Bishops endorsed the restructuring at its November meeting, but the vote was not unanimous. Phoenix Area Bishop Minerva G. Carcaño shared her concerns about the plan during a presentation.

"Studies have shown that there is duplication and even competition among our general agencies that does not benefit the mission and ministry that God is calling us to be about," Carcaño said.

"Yet, general agencies have served a vital function for resourcing the church and enabling us to act connectionally, and we should not lose these essential functions. There are things even our strongest local churches cannot do alone, and some things they will not do."

In some ways, she suggested, the proposed restructuring of the agencies does not go far enough. She noted that the Connectional Table legislation just puts agency work in new categories and leaves unanswered what agency functions might be dropped or added to better serve a global denomination.

In addition, she and others at the Pre-General Conference News Briefing echoed concerns raised by the denomination's ethnic caucuses that the smaller governance boards would severely limit the contributions of people of color. "In the U.S., a church that does not reach out to people of color is a church that will die," Carcaño said. 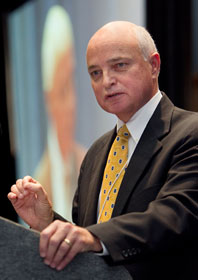 The Rev. Timothy McClendon speaks about his concerns regarding church restructuring. McClendon is superintendent of the denomination's Columbia (S.C.) District.

At the coming General Conference, delegates also will take up a proposed amendment to the denomination's constitution to create a bishop without the usual responsibility of overseeing a geographical area. That bishop would be elected by the Council of Bishops and would have - among other duties - the authority to serve as the denomination's chief ecumenical officer, help align the strategic direction of the church and focus on growing vital congregations.

The Connectional Table endorsed this change, and under the proposed restructuring legislation, the "set-aside" bishop would be chair of the General Council for Strategy and Oversight and ex-officio member of the board of the Center for Connectional Mission and Ministry.

Five of the voting members of the proposed Council for Strategy and Oversight would be bishops. The Center for Connectional Mission and Ministry would make its financial decisions in consultation with the Council of Bishops.

"The power dynamic isn't equal no matter how someone does the math," said McClendon, who is a candidate for the episcopacy. "There is no way for the 15 persons, who are unpaid volunteers, no matter how great they are in all that they do, &ellipsis to make these (financial) decisions. It also seems to me that the set-aside bishop is where the real power is in the proposed structure."

Concerns about separation of powers

The Rev. Thomas E. Frank, a historian of Methodism and professor at Wake Forest University in Winston-Salem, N.C., urged the delegates to keep the denomination's historic "principles" of governance in mind when evaluating restructuring proposals.

He noted that the denomination and all but one of its predecessor bodies have maintained a "separation of powers" between General Conference and bishops.

"Separation of the two prevents consolidation of power and advances accountability and participation," Frank said. "The United Methodist Church is hardly alone in this principle. It's basic to the functioning of any nonprofit corporation or nongovernmental organization."