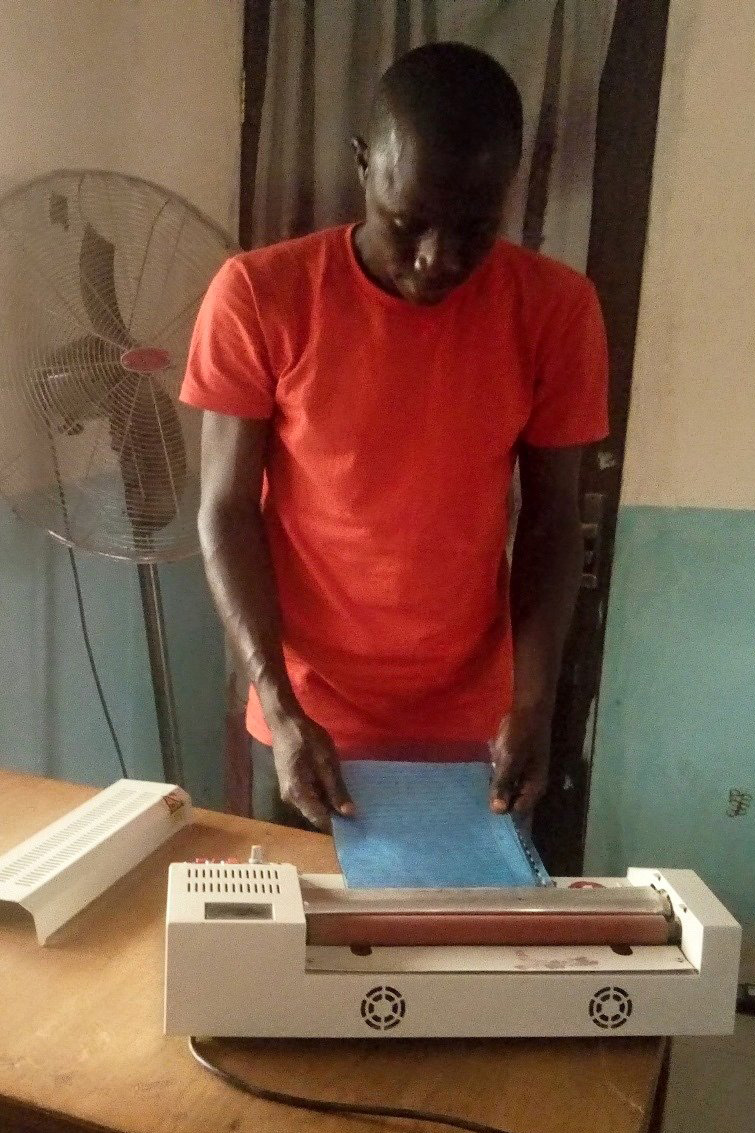 Babangida Ibrahim laminates a document at the Northern Nigeria Conference’s computer training center in Gombe, Nigeria. The center has a new solar energy system that is helping the conference and its students save money. Photo by Daniel Garba.

In the blink of an eye, the Northern Nigeria Conference’s computer training center and conference office became a beacon of light, thanks to a new solar energy program.

The solar project is a collaboration between the conference, two churches in North Georgia and United Methodist Communications.

The computer training center was established in 2012 with support from the Iowa and North Georgia annual conferences. The school shares the same block with the conference office in the southern part of Gombe, bordering with Karim Lamido in Taraba State and Alkaleri in Bauchi State. The annual conference was founded in 2006 and has more than 150,000 members.

In the first two years, the conference realized that 80 percent of the revenue from the school and business center was going toward fueling the generator.

In 2014, Jeff Jernigan, chair of the missions team at McEachern United Methodist Church, and Michael Jordan with Mount Pisgah United Methodist, both in the North Georgia Conference, along with Nigeria conference staff, began looking for ways to tackle the problem. They explored the possibility of converting the center to solar power, with input from staff at United Methodist Communications.

“Energy poverty is a huge issue in much of the majority world and in many parts of northern Nigeria,” said Jernigan. “Solar power for the (United Methodist computer center) and the North Conference secretariat compound is a game changer and allows us to bring in much-needed revenue for the conference.”

Jernigan and partners in North Georgia began working to raise the money needed to begin the project. In 2017, United Methodist Communications signed on to provide the remaining funding and support through its Global Communications Technology team.

“I am especially excited about this ministry because we did it by the grace of God in a healthy 50/50 partnership with all of the partners contributing in meaningful ways,” Jernigan said.

“It is like a dream,” he said. “Now we have been set free from the bondage of a generator, which has been suffering us for many years. Now we have power, which is running the secretariat and the computer school 24 hours (a day) without tears.”

United Methodist members from various charges and districts came to witness the dedication and commissioning of the solar-energy system. Government officials, traditional rulers and religious leaders also attended. It is one of the biggest solar projects in Gombe State.

To date, the school has graduated about 400 young people and 200 adults, mostly clergy. Currently, 23 students are enrolled, with an average of 100 trained annually.

The school offers two different courses: diploma and certificate. The costs for the training have decreased with the installation of solar power, from $40 to $23 for the diploma course, and from $30 to $12 for the certificate course.

In addition to the training, the center also offers internet access, typesetting, photocopying, device charging and printing services for varied fees. The solar-energy system has eliminated some of the internet issues at the center resulting from generator failure.

Barnabas Yakubu Nuhu, a computer student at the center, is grateful for the solar power. He said it is saving him money and giving him more time to learn.

“Before the solar system, the computer school had been operating three times a week … because of lack of steady power and fuel consumption by the generator. But now, we attend classes from Monday to Saturday because we now have steady light.”

The conference also is working to raise an additional $800 to upgrade the internet connection.

Danladi said he is thankful to Yohanna, United Methodist Communications and partners in the North Georgia Conference for their “immeasurable contributions” to the success of the project.

“Glory be to God Almighty for robbing the mind of his people to come to our aids.”

Garba is a communicator for the Northern Nigeria Conference.

The congregation’s 30 members had belonged to several mainline denominations, as well as nondenominational churches, before joining First Wesleyan United Methodist Church of the Deaf.
Mission and Ministry

The Son of a Preacher Podcast refashions vintage sermons by United Methodist pastor the Rev. Wallace A. Stark as bite-size podcasts, with commentary from his son, GW Stark.