Beleaguered health care workers in Sierra Leone are watching their colleagues die, while struggling daily to care for more patients than they have beds. In many cases, they are receiving no salary. 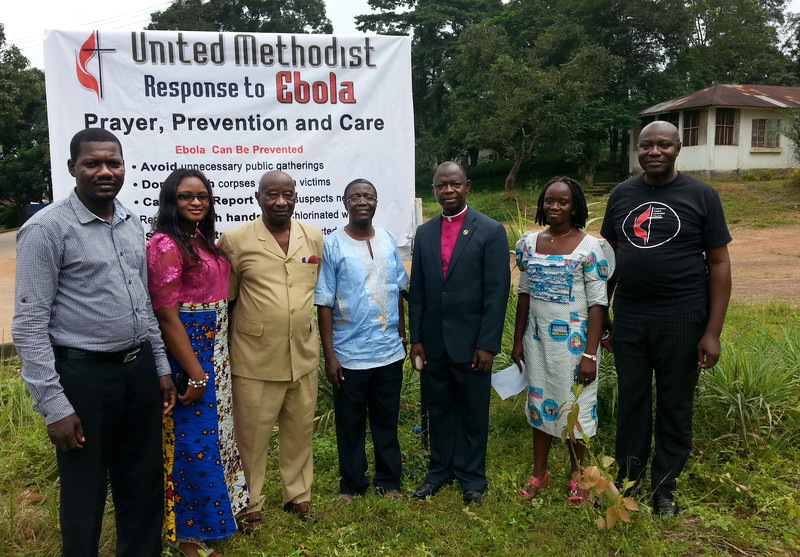 The Sierra Leone Conference – with support and funding from the United Methodist Committee on Relief – is now supplying complete personal protective equipment to all United Methodist health facilities that are operational around the county.

"We don't want any United Methodist health worker to die of Ebola; hence we have now moved our intervention to the empowering stage where we are focusing on providing equipment for all our health facilities around the country,” Yambasu said.

The World Health Organization and Doctors without Borders are warning of an upsurge in new infection rates in West Africa in the coming weeks. The Ebola epidemic is likely to last for the next six months instead of the three months earlier projected. A report on PBS’s Frontline focused on the difficulties of containing the outbreak in Sierra Leone.

The week of Aug. 31, the number of Ebola cases admitted at the only functional health center in Kenema peaked at 100 in a facility only equipped to handle 50. More than 30 health workers at that center have died, according to media reports.

Local media reported a chief in Kenema threatened a blockade to ambulances bringing Ebola patients from other districts because they were compounding the Ebola situation in his chiefdom.

Nurses at the Kenema center went on strike Aug. 30 after the death of a nurse and senior physician.

A local newspaper reported that the death of the nurse, Hawa Rogers, “came in the wake of non-payment of the weekly risk allowance of $50 to all staff at the Ebola unit.”

A similar demonstration by nurses was held Sept. 1 at Connaught Hospital, the government’s biggest health facility in Freetown.

Read full coverage of The United Methodist Church’s response to the Ebola outbreak and donate online to United Methodist Communication’s efforts to help the denomination distribute information about the disease at www.umc.org/ebola.

The Sierra Leone Conference's health board, in an emergency meeting Sept. 4, resolved to close four of its health centers located in remote communities. The board agreed that only facilities considered essential would remain open and those would receive additional personal protective equipment.

Health care workers reported that runaway Ebola victims have been showing up at rural community health centers where they are less known and where staff do not have the requisite expertise and equipment to easily detect their condition.

New infection rates in the capital of Freetown are also on the increase. The habit of families keeping their infected loved ones at home still poses the strongest obstacle to controlling the disease in the country. Last month, the government of Sierra Leone passed into law a bill making it a criminal offence to harbor Ebola-infected persons at home.

Meanwhile, the government dismissed the Minister of Health and Sanitation Miatta Kargbo after public outcry that his efforts were “inept” in the Ebola crisis.

United Methodist Communications, the denomination’s communications agency, is providing text messages of encouragement and useful Ebola information to United Methodist pastors and district superintendents in addition to a $10,000 donation to support communications efforts by the conference. A $10,000 grant was given to the Liberia Annual Conference as well.

“The UMCom text-messaging strategy has hugely boosted our denominations concern for our clergy during this difficult time. Pastors are calling me from all over the country thanking me for the messages of hope. Some say they look forward to the messages every afternoon and evening,” the bishop said.