United Methodists held thanksgiving services and joined in celebrations tinged with sadness and caution as the World Health Organization declared the end of the Ebola outbreak in Sierra Leone after no new cases were reported in the country for 42 days.

The deadly virus took more than 11,300 lives before the WHO declaration on Nov. 7. Most of the dead were in the West African countries of Sierra Leone, Liberia and Guinea. A total of 8,704 Sierra Leoneans were infected during the outbreak and 3,589 died, including 221 healthcare workers. Eleven were doctors, including Dr. Martin Salia, chief medical officer and surgeon at United Methodist Kissy Hospital in Freetown.

“With Guinea recently recording three new cases near Kambia District, and with the many cross-border movements between Sierra Leone and Guinea, I encourage every Sierra Leonean to remain alert and act responsibly,” Yambasu said. Kambia is the Sierra Leone District on the Guinea border.

“This period is about ensuring that we can consolidate the gains of existing systems to manage future risks,” WHO Sierra Leone representative Dr. Anders Nordström said at the public ceremony marking the end of Ebola. 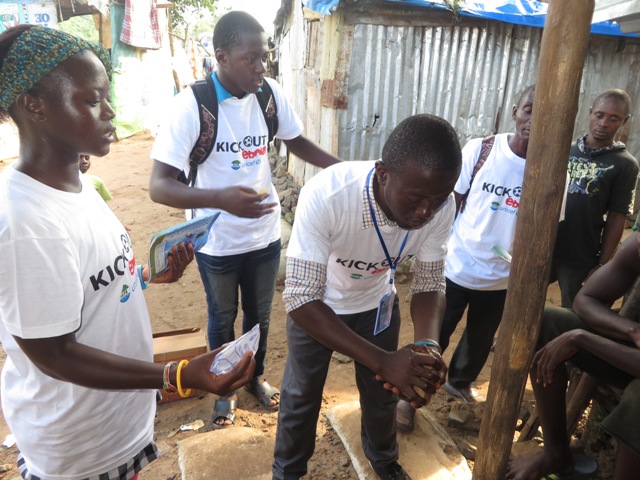 Volunteers demonstrate hand-washing at a slum near Juba in Freetown, Sierra Leone. Education was part of the three-day lockdown in September 2014 to stop the spread of the Ebola virus.  A 2014 file photo by Phileas Jusu.

A day of Thanksgiving

Sierra Leone President Ernest Koroma has declared Nov. 21 as a national Thanksgiving Day and Dec. 18 as a day of recognition of Ebola response workers.

Many United Methodist congregations across the country held special prayers of thanksgiving in their respective churches over the weekend.

The Rev. Mariama Bockarie, superintendent of the Makeni district, said there was apprehension and a subdued reaction that amounted to low-key celebrations in Makeni, where the local Council of Churches has also set aside Nov. 29 to hold a thanksgiving and memorial service in honor of those who died of Ebola.

Saturday, United Methodists in Makeni joined other denominations at the cemetery where the Ebola dead are buried, offering prayers for the dead and families who lost their loved ones to Ebola.

“The church thanked God for his goodness for ending Ebola in the country. People were happy that Ebola had ended, but rowdy celebrations were not done as was the case when there was a false alarm at the height of the outbreak that Ebola was over,” Bockarie said.

Bockarie was referring to an impromptu celebration that occurred when a Chinese Ebola response team entered a holding center in Makeni and released peopled confined on suspicion of having Ebola after they tested negative. Motorbike riders and a confused group of youth heard about the release and took to the streets sounding horns and shouting “Ebola don don,” meaning Ebola is over.

The Rev. Andrew Forbie, superintendent of the Kenema District of the United Methodist Church, said the Council of Churches in Kenema is planning a thanksgiving service on Nov. 15.

At Kercher Memorial United Methodist Church, where Forbie is the pastor, the congregation on Sunday, Nov. 8, sang the song “My Hands Are Blessed.” The song is usually sung at the end of a service to exchange greetings, hugs and handshakes.

Ebola had changed that.

“With the coming of Ebola, we ceased to touch or hold. Rather, we waved to each other. It was very reviving today in church when we sang “My Hands are Blessed” and physically touched and hugged like we used to do. It was a very emotional scene today,” Forbie said.

“We were so intimidated by Ebola that husbands were afraid to touch their wives when they returned from an errand in town or from work. Today, we prayed especially for the end of Ebola,” Forbie said.

President Korma warned that the country must be prepared for a re-emergence of Ebola.

“To fully secure our victory, we must continue with the newer and better ways of caring for the sick, the healthier ways of handling the dead, and the progressive habits of hygiene, sanitation and vigilance that helped us defeat the virus,” Korma said.

He urged Sierra Leoneans to continue reporting the sick and every death, and to swab all bodies to remain certain that Ebola has not returned undetected.

Koroma spoke to thousands gathered at the Bintumani Hotel in western Freetown – including diplomats, government officials, Ebola survivors, civil society representatives and health officials at a special ceremony to mark the end of the outbreak.

“We prevailed over an evil virus. . . . The disease challenged the very foundations of our humanity. We had to change the way we grew up caring for sick relatives; the way we mourned loved ones; the way we showed affection when greeting each other. And we complied with necessary but difficult restrictions on movement and traditional practices,” Koroma said.

The president praised the “dedication of Ebola response workers, whose heroism is without parallel in the history of our country.” He mentioned the healthcare workers, hygienists, burial teams, lab technicians, those who cleaned infected areas, surveillance officers, social mobilisers, ambulance and non-ambulance drivers, and motorbike riders. In all, more than 35,000 Sierra Leoneans are registered as Ebola response workers.

“There were many more who volunteered to serve in the fight without recognition or acclaim. We salute these volunteers who served in various capacities within our surveillance system, manning checkpoints, and telephone hotlines, digging graves, and counselling the sick and bereaved,” Koroma said.