The concrete sidewalk outside the Oregon Convention Center won’t be the most uncomfortable place the Rev. Mike Tupper has slept in the last 168 days.

At least tonight, he won’t be alone. Joining Tupper in the well-worn gray tent will be the Rev. Frank Schaefer and Schaefer’s son, Tim. All three are sleeping in the tent to symbolize how they say LGBTQ people are kept outside the doors of The United Methodist Church.

“My little bit of discomfort doesn’t compare to the type of discomfort LGBTQ people have had to live with day in and day out as the result of the discriminatory policies of our denomination,” Tupper said. 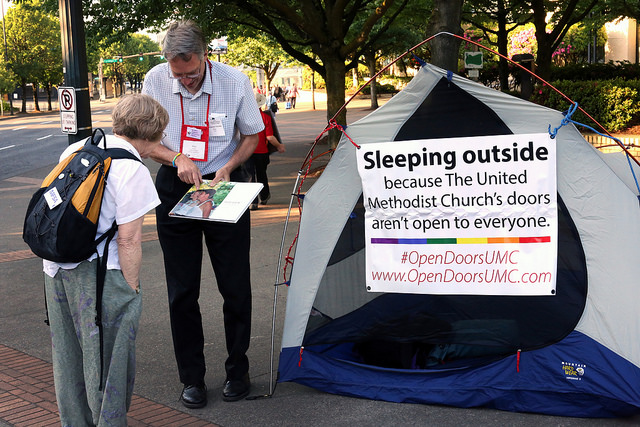 The Rev. Mike Tupper is raising awareness for National Tent Night, Friday, May 13. Tupper has been sleeping outside since Nov. 30 in support of LGBTQ persons including his daughter, Sarah Tupper, and her wife, Photo by  Kathleen Barry, UMNS.

Schaefer was put on trial, lost his ministerial credentials but then regained them after appeals. Tupper’s complaint ended in a just resolution but he has a second charge pending for signing the marriage license of a friend’s same-sex wedding.

Both men are in Portland at the 2016 United Methodist General Conference praying for the church to change its stance, which for the past 44 years has been that homosexuality is incompatible with Christian teaching.

Tupper and Schaefer are looking forward to a day when children who grew up in The United Methodist Church could also get married in them despite their sexual orientation.

Schaefer said he is sleeping in the tent for his son, who is now answering God’s call on his life to be a minister. Both Frank and Tim know that will not be possible at this time.

The denomination’s top lawmaking body is meeting in Portland May 10-20. During that time, they will consider more than 100 petitions calling for either a change in church policy or a firm stand on the current policy.

“I don’t get the attitude of many who are taking a middle-of-the-road attitude that it’s not so bad, weddings are happening all the time and there is a chance in the future it will change,” Frank Schaefer said. “People are still being harmed, driven outside of their own faith tradition, of their own beloved churches.”

“Everybody I talk to says there is no chance, but what I keep telling people is just a few weeks ago I preached about a guy being raised from the dead. It was such an amazing story that God was able to raise up his son from the dead. If God can do that God can raise up this church to eliminate the discrimination and bring justice and peace to our denomination.

“I believe it and I have hope.”