• The Rev. H. Eddie Fox served a quarter century as executive director of World Methodist Evangelism and traveled the world.

• His tenure coincided with the fall of communism in Eastern Europe and presented opportunities for churches there to revive or begin.

• A top student at Emory University’s Candler School of Theology, Fox was ordained as an elder in the Holston Conference, and served churches in Virginia and Tennessee.

The Rev. H. Eddie Fox became synonymous with Methodist evangelism over a long career of sharing the gospel worldwide.

Whether it was delivering bicycles to Cuban pastors, helping local churches in Eastern Europe begin or revive after communism collapsed there, creating a New Testament edition designed for effective witnessing or finding innovative ways for the World Methodist Evangelism organization to do its work, Fox created a legacy that is large and lasting, admirers say.

“I never have seen anyone have the impact that Eddie had on the world, in terms of faith,” said retired United Methodist Bishop Robert Fannin.

Fox, an ordained United Methodist elder in the Holston Conference, died in the early morning of July 28, at age 83, after having been in hospice care in his hometown of Sevierville, Tennessee, said the Rev. Kimberly Reisman.

From 1989 to 2014, Fox led World Methodist Evangelism, a part of the World Methodist Council. Reisman succeeded him as executive director, and was among those offering tributes.

“He traveled millions of miles over the course of his time with World Evangelism,” she said. “He empowered leaders across the world to be able to impact their countries on behalf of Jesus Christ.”

“I worked with Eddie for over 20 years, and I learned so much from him,” Worrell said. “Methodism has lost a great leader.”

Fox grew up attending a Methodist church on Waldens Creek in Sevier County, in the Appalachian foothills of East Tennessee. His Methodist roots were deep.

“John Wesley (Methodism’s founder) was still alive, and my family was already Methodist,” he was known to say.

At age 9, he committed his life to Christ, and by age 17, he was licensed to preach.

A top student at Emory University’s Candler School of Theology, Fox was ordained as an elder in the Holston Conference, and served churches in Virginia and Tennessee before joining the Board of Evangelism, now known as United Methodist Discipleship Ministries. He was on staff 15 years, including six years as head of evangelism.

Fox also was on the faculty of the Billy Graham School of Evangelism for 15 years beginning in the mid-1980s.

When Fox was named to lead World Methodist Evangelism in 1989, Graham was among the first he heard from.

“He let me know that God had chosen me for this moment and that he was praying for me,” Fox told United Methodist News for an article after Graham’s death in 2018. “It was very encouraging.”

The World Methodist Council, founded in 1881, links 80 Wesleyan/Methodist church groups on six continents, including The United Methodist Church. World Methodist Evangelism is under the council, and was begun in 1971 to emphasize and facilitate the sharing of the gospel by the council’s churches.

Fox was World Methodist Evangelism’s second director, and proved a great fit from the start, according to the Rev. Maxie Dunnam.

“He was dynamic and alive with his passion for the gospel, especially evangelism,” said Dunnam, who was on the committee that hired Fox. “There was a sense in which you felt drawn in from the moment you met him.”

A 2014 United Methodist News feature on Fox noted that he never saw an ocean before age 21. But for a quarter century as leader of World Methodist Evangelism, he traveled the world — and he didn’t go alone.

“Mary Nell, his wife, was a wonderful partner,” said Fannin, a longtime World Methodist Council board member. “She was always beside him.”

Fox’s early tenure at World Methodist Evangelism coincided with the fall of the Soviet Union and with communism’s collapse in nearby countries, offering opportunities for Wesleyan churches to be revived or started.

“Eddie recognized that need and came alongside all of those churches,” Reisman said. “World Methodist Evangelism was instrumental, under Eddie’s leadership, in establishing the Baltic Methodist Theological Seminary in Estonia, and in planting new churches around Eastern Europe and the Baltic, as well as finding support for existing churches.” 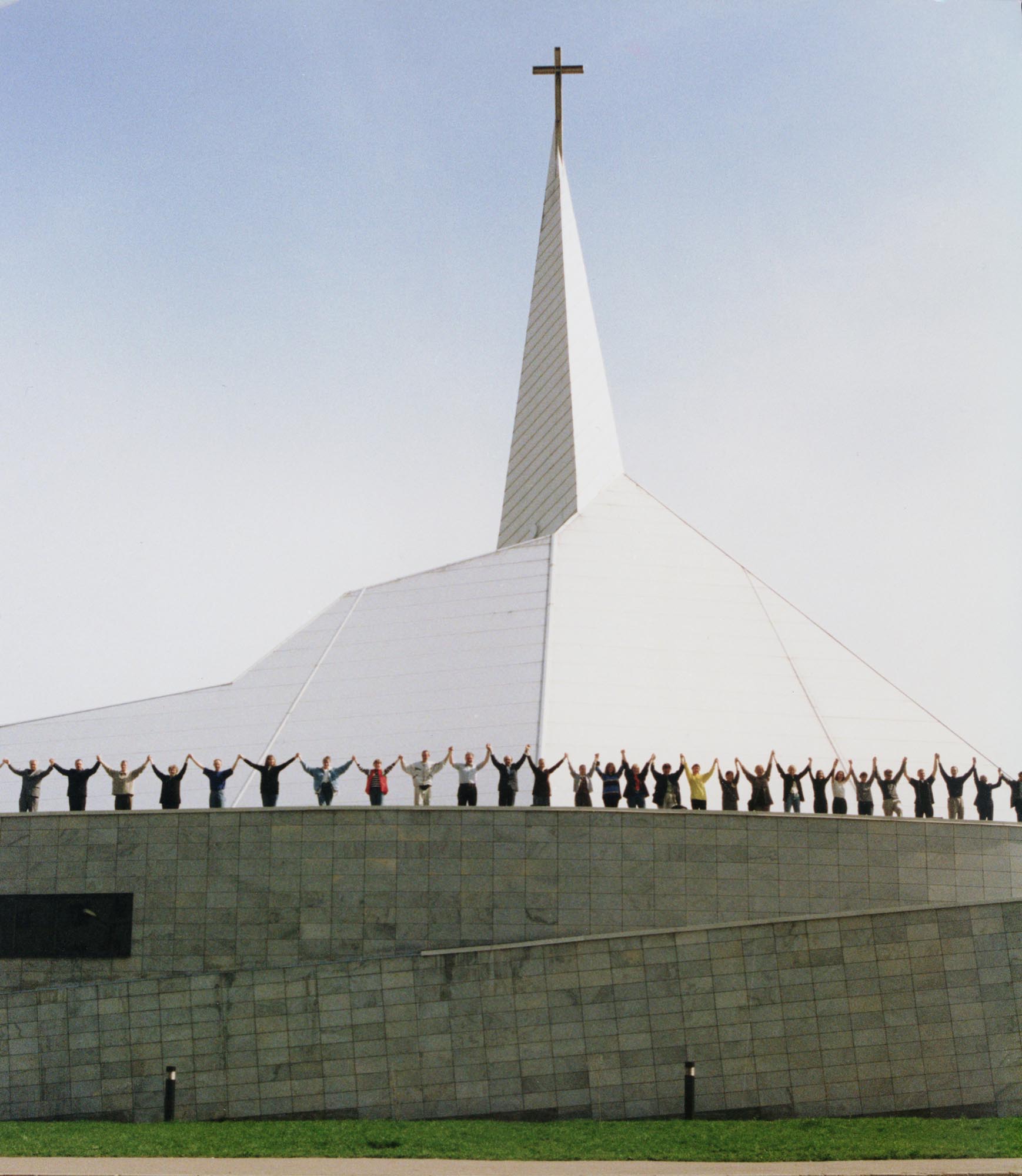 Worshippers rejoice in front of the Baltic Mission Center in Tallinn, Estonia, in this undated file photograph. Methodists from around the world formally opened and dedicated the Center Sept. 10, as a place of worship and teaching. The day climaxed almost six years of construction of the Methodist Church in Tallinn and the Baltic Mission Center. A UMNS photo courtesy of the Rev. Eddie Fox.

United Methodist Bishop Christian Alsted of the Nordic and Baltic Area was another paying tribute after learning of Fox’s death.

“Methodism has lost one of its most prominent encouragers and enablers of evangelism and church growth across the world, and The United Methodist Church in Estonia has lost a dear friend, an honorary member of the annual conference and a longtime member of the board of trustees of the Baltic Methodist Theological Seminary,” Alsted said.

Reisman credited Fox with World Methodist Evangelism’s Connecting Congregations movement, which began by pairing U.S. churches with those getting started in previously communist countries where practicing Christian faith openly had been difficult or even forbidden. The program has continued and grown to include churches in Africa and South Africa.

Fox wrote a number of books on Christian faith, and Reisman believes a strong part of his legacy is the “Faith-Sharing New Testament With Psalms,” a book he co-edited that includes basic advice about how to share the Christian faith.

Reisman said the book has been translated into many languages and that this year, the 25th anniversary of its debut, will see the publication of an updated edition.

She also lauded Fox for establishing The Order of the FLAME (Faithful Leaders as Mission Evangelists), a covenant community of clergy committed to evangelism.

“He encouraged young pastors to see themselves as mission evangelists … assigned not just to their local church but to their whole community,” Reisman said.

The files of United Methodist News include articles documenting Fox’s work and travels. In 2002, he went to Cuba to deliver 400 bicycles to missionary lay pastors of the Methodist Church in Cuba.

“I want to give them wheels so they can go faster and do more for the Lord,” Fox said.

A 2013 United Methodist News article on the death of Nelson Mandela included Fox’s memories of encountering the South African leader, including presenting him an award from World Methodist Evangelism in 1998.

Fox himself was much honored. But in 2013, Candler School of Theology’s decision to give him a Distinguished Alumni Award was met with protests from a student group committed to full LGBTQ inclusion in church life.

Fox supported the denomination’s official policy that the practice of homosexuality is incompatible with Christian teaching, and made that clear as a General Conference delegate in 2008.

“He had a traditionalist view of Scripture and Christian ethics, but I can’t remember that causing difficulty for him in his preaching or in his ministry,” Dunham said. “Maybe that’s because outside of our country those issues were not as pronounced as they are here.”

Dunnam and Reisman, who are father and daughter, both described Fox’s death as a personal loss.

“Like many others across the globe, Eddie mentored and supported me as a young minister, consistently providing wisdom, guidance and opportunities for growth,” Reisman wrote in a statement for World Methodist Evangelism. “He was committed to building strong relationships and friendships, and because of his joyful spirit and warm heart those friendships came easy and grew deeply.”

A celebration of life service will be held at 11 a.m. Central time on Aug. 14 at Hermitage United Methodist Church, in Hermitage, Tennessee. In lieu of flowers, memorial gifts may be made to the Dr. H. Eddie and Mary Nell Fox Endowment for Evangelism at the Foundation for Evangelism.

The daily life of United Methodist pastors is getting more and more stressful, with COVID-19, racial unrest, natural disasters and a likely denominational split over sexuality taking a toll.
Mission and Ministry

Many congregations and affiliated nonprofits in the U.S. are stepping up efforts to help low-income people squeezed by inflation and affordable housing shortages.
Social Concerns