• Shamana had a passion for the arts and for creating a more just world.

Bishop Beverly Shamana played the piano, directed choirs, turned gourds into works of art and answered a call to ministry that led her to become the second female African American bishop of The United Methodist Church.

“When you got to know her, you realized what a renaissance person she was,” said California-Pacific Conference Bishop Grant Hagiya.

Shamana, who oversaw the California-Nevada Conference from 2000 to 2008, died Aug. 1 at home in Eagle Rock, California. She was 81 and died of complications from Parkinson’s disease, said the Rev. Yvonne Williams Boyd, a close friend.

Council of Bishops President Cynthia Fierro Harvey was among the church leaders responding to Shamana’s death.

“Women bishops stand on the strength of her shoulders,” Harvey said in a press release from the Council of Bishops. “Her commitment to the episcopacy and for women bishops was paramount.”

Bishop Tracy Malone, secretary of the Council of Bishops, recalled Shamana’s focus on racial and social justice, and how she encouraged her and many others to be transformational church leaders.

“But I will remember her most as a cherished colleague who embodied a love and spirituality that embraced and lifted all the people she met,” he said. Brown and Shamana were both elected bishop at the Western Jurisdictional Conference in 2000. 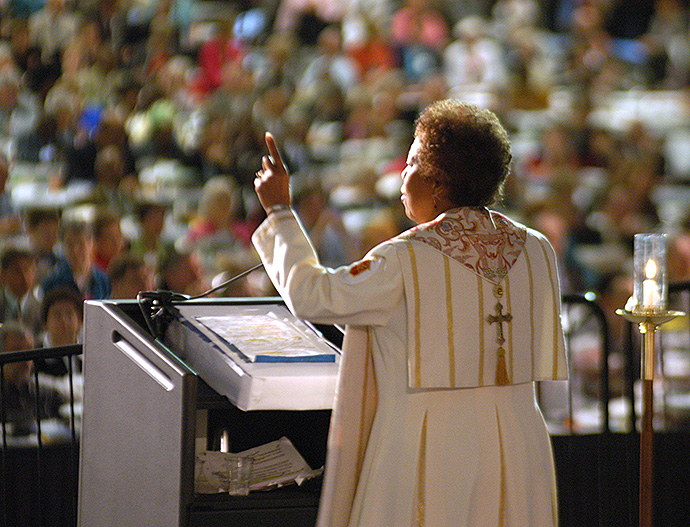 Shamana was born Beverly Martin on Nov. 4, 1939, and grew up in Pasadena, California, the oldest of the four children of Sylvester and Charlene Martin. She professed her Christian faith as a girl at Metropolitan Baptist Church, undergoing immersion baptism. Later, she and her family would join Lincoln Avenue Methodist Church.

A pianist and choir member from her early days, she would earn a B.A. in music at Occidental College in 1961. She taught music history and led choirs in public schools while also leading church choirs.

Shamana was an entrepreneur, too.

“I had a manufacturing and retail business that was designing and machine-knitting clothes for men and women,” she told the Cal-Nevada Conference newspaper in 2020.

Shamana became involved in the Ecumenical Institute of Chicago’s work in Los Angeles, through her local church, Grace United Methodist Church. While serving as executive secretary for the Commission on the Status and Role of Women in the Pacific and Southwest Conference in the mid-1970s, she answered a call to ministry.

At Garrett-Evangelical Theological Seminary, Shamana earned a master of divinity degree and won a preaching award. She was ordained deacon in 1979 and became an elder in the California-Pacific Conference in 1984.

Not long before her ordination, she changed her last name. She’d been Beverly Taylor, then was Beverly Anderson during a marriage that ended in divorce.

But the name she adopted surprised even her. Bishop Beverly Shamana shares photos with members of the Hope for Africa Children's Choir, which performed at the 2008 United Methodist General Conference in Fort Worth, Texas. File photo by Paul Jeffrey, UM News.

Shamana would serve multicultural churches in Los Angeles and Inglewood, and spent 11 years as a conference staff member. She was a delegate to six General and Jurisdictional conferences.

In 2000, Shamana was elected a bishop by the Western Jurisdictional Conference. Bishop Leontine T.C. Kelly was the only African American woman to precede her in the United Methodist episcopacy.

Assigned to lead the California-Nevada Conference, Shamana also would serve as president of the United Methodist Board of Church and Society and as a member of the Connectional Table. She traveled with a Council of Bishops peace delegation to Pakistan and the Middle East, and made episcopal visits as well to Angola and to Africa University in Zimbabwe.

Back home, she had to deal with tensions between progressive and traditionalist United Methodists who differed sharply on LGBTQ inclusivity. News organizations covered the departure of a traditionalist church that got to keeps its property despite the denomination’s trust clause, under a ruling by a California appellate court.

Hagiya said church conflict “weighed on her,” but she had a way of diffusing it.

“She was so well liked by those who got to know her,” he said. “I think it transcended some of the difficulties that we (bishops) all face.”

Larry Hygh Jr., former communicator for the Cal-Pac and Cal-Nevada conferences, did his doctoral dissertation on the denomination’s first four African American female bishops, including Shamana.

She told him her role models included Sojourner Truth, Phillis Wheatley and Barbara Jordan — but also Hildegard of Bingen (1098-1179), a German Benedictine abbess, writer and composer.

As for her own leadership, Shamana told Hygh she worked hard to provide clarity and to listen. She also pushed for racial minorities and women to be heard.

“Sometimes that means helping males to be quiet for a while and hear what women have to offer because in this society, of course, men have been rewarded and encouraged to have the answers, to speak first, to speak the loudest, to speak the longest,” she told Hygh.

In the 1990s, Shamana began to collect gourd art, and soon she was doing her own gourd art pieces, which have been included in exhibitions.

She would decorate gourds with stones, dyes, beads and more, and she sometimes used gourd drums and rattles in worship.

Of working with gourds, she told the Sacramento Bee in 2001, “It feeds my soul and puts me in touch with the mystery. It’s a holy endeavor that bypasses the rational mind and goes to a deeper place in your soul.”

Shamana worked in other art forms, and continued as a musician, sometimes playing the piano for Council of Bishops meetings and annual conferences. Integrating faith and art were crucial to her, and she wrote a book for Abingdon Press titled “Seeing in the Dark: A Vision of Creativity and Spirituality.”

Hagiya said Shamana was a mentor for him and others, and had a presence that will be missed.

“Beverly didn’t need to be the center of attention, but she grabbed it anyway,” he said. “She had that charisma that’s not showy or flashy. It was just this deep-centered spirituality that people gravitated to.”

Shamana is survived by her husband, Walter Woods, and her siblings, Patricia Boyd, Sylvia Walker and Charles Martin. Her faithful caregiver at the end of her life was Molikut “Molly” Laguda.

A memorial service will be held at First United Methodist Church of Pasadena, on Sept. 11 at 10 a.m. U.S. Pacific time. The church plans to livestream the service.

In lieu of flowers, donations in Shamana’s memory can be made to an interfaith organization in Pasadena that she long supported — Friends in Deed, which provides services to homeless people and other at-risk communities.