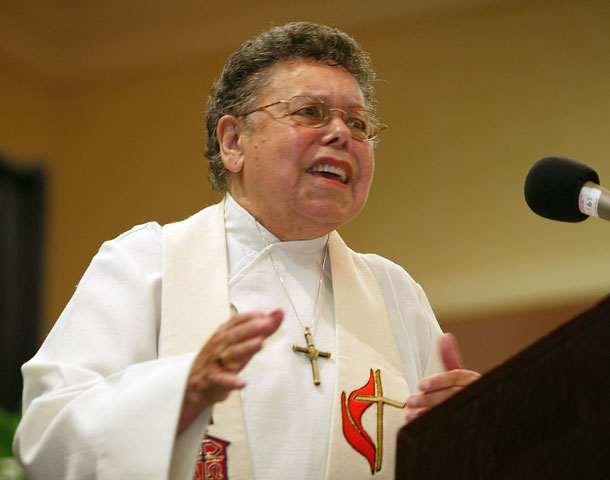 Leontine Turpeau Current Kelly is being remembered as a trailblazer, a spiritual mother, a bearer for women of color in leadership and a gift to The United Methodist Church. She died at age 92 on June 28, 2012.

Being elected as the first African-American woman bishop was just part of her "audacious life," said Bishop Judith Craig, who also was elected a bishop in 1984 just hours after Kelly.

"She made a bold journey from the Southeastern Jurisdiction to the Western Jurisdiction. It was as audacious as her whole life," Craig said. "She never ran from challenge or controversy, and she also stood fast in her convictions."

Retired Bishop Melvin Talbert, Nashville, Tenn., who served with Kelly on the College of Bishops in the Western Jurisdiction, also remembers her election to bishop as groundbreaking.

"I remember some of my colleague bishops in the Southeastern Jurisdiction were adamantly opposed to her election," he said. Kelly was a member of the Virginia Annual (regional) Conference at the time.

"I was gratified she was elected," he said.

Craig said she and Kelly would seek each other out in those early days. There were only three women on the Council of Bishops at that time. Marjorie Matthews was the first woman elected bishop in 1980. After Matthews' death, there were "just the two of us," Craig said. "I was very grateful for her presence. It made me realize how lonely Marjorie must have been."

"Bishop Leontine Kelly has been the spiritual mother of many clergywomen and especially the women bishops," said retired Bishop Sharon Brown Christopher, Nashville, Tenn. "She called us into futures we never anticipated for ourselves, would not let us capitulate to our insecurities and druthers, and coaxed us into new lives that gave new leadership to The United Methodist Church. Her feisty, God-centered spirit is embedded deeply in our souls and will continue to form and instruct us," she said. 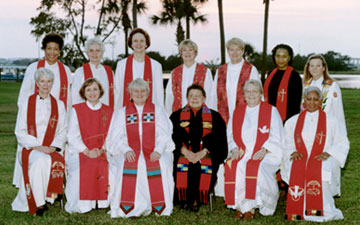 Bishop Leontine Kelly (fourth from left) is pictured with her fellow 12 women bishops at a 2000 Council of Bishops' meeting in St. Simons Island, Ga. A UMNS file photo by J. David Miller.

"She was a gift to the church and a perfect example of what God can do when God has chosen an individual," he said.

Larry R. Hygh Jr., associate general secretary and director of communications for the Board of Global Ministries, came to know the bishop as part of work he did toward a graduate degree. "Her political party affiliation and personal opinions did not overshadow her Christian witness in a poly-cultural world, with seemingly limited worldviews," Hygh said. "I hear her telling me about leaders being authentic and sincere. 'Leaders give of themselves,' she said. 'Leaders take risks and are on the cutting edge.'"

Kelly's daughter, Angella Current Felder, followed her mother's example by giving leadership to Africa University and women of color, Salley said. Current Felder retired as director of the United Methodist Office of Loans and Scholarships, Board of Higher Education and Ministry, in 2010.

Kelly is also survived by two sons, Gloster B. and John David Current, and an adopted daughter, Pamela Lynne Kelly.

The funeral service for Kelly will begin at 10 a.m. PST on July 5 at Jones Memorial United Methodist Church in San Francisco. Family Hour is scheduled for July 4, 1 p.m. to 3 p.m., followed by visitation and viewing from 4 p.m. to 8 p.m. Both will take place at Jones. The family asks that contributions be made in lieu of flowers to:The Ila Marshall Turpeau Scholarship Fund, Garrett Theological Seminary, 2121 Sheridan Road, Evanston, Ill., 60201 or to the The Bishop Leontine T. C. Kelly Endowed Scholarship Fund, Africa University Development Office, P. O. Box 340007, Nashville, Tenn., 37203-0007.

Kelly grew up in The Methodist Church. Her father, the Rev. David D. Turpeau, was a Methodist minister who also served in the Ohio House of Representatives. Her mother, Ila Marshall Turpeau, was an outspoken advocate for women and blacks, and she founded the Urban League of Cincinnati.

Kelly took on the mantle of leadership when her second husband, the Rev. James David Kelly, died. At his urging, she became a certified lay speaker in Virginia. She enrolled in the Course of Study, attended summer school at Wesley Theological Seminary and received her master of divinity degree from Union Theological Seminary in 1976. She was ordained a deacon in 1972 and an elder in 1977.

"Bishop Kelly was inspiring and challenging at the same time. Her forward-focused energy and her impatience with things that have prevented the church (and we, its members) from living the active, holy and fruitful lives we are called to have been a source of inspiration to me," said Harriett Olson, top executive for United Methodist Women.

"She carried the extra burden of being among the 'firsts' as the second elected woman and the first elected African American woman on the Council of Bishops. I am personally grateful for all the ways she 'made a way' for other women and persons of color to follow God's call on their lives. We have been blessed by her loving, committed and energized witness. My first time to hear her preach was at the 1988 General Conference. It was a high moment."

"The first time I heard her preach, even though I was a Christian, I had a complete conversion experience all over again."
— M. Garlinda Burton

"Bishop Kelly was beloved, especially by laypersons in her local churches who loved her commitment to strengthen and help local churches grow their membership both in number and spiritually," said Raúl B. Alegría, treasurer of the Southeastern Jurisdiction. Kelly was bishop in the California-Nevada Annual Conference when Alegría served as conference treasurer from 1987 to 1994. "When persons disagreed with Bishop Kelly, she found that moment as an opportunity to 'love people into goodness' so that the issue at hand found common agreement on both sides."

M. Garlinda Burton, top executive for the United Methodist Commission on the Status and Role of Women, agrees Kelly was a great preacher.

"Bishop Kelly is one of the reasons I'm in leadership in the church right now. She has been a standard-bearer for women of color in leadership, and there will be no one like her, ever. She's one of a kind," Burton said. "The first time I heard her preach, even though I was a Christian, I had a complete conversion experience all over again."

"She will never leave us," said Craig. "I am sure she died peacefully and at peace in the Lord. There is no question about her confidence she was in the presence of the one she served her whole life."

The board of The United Methodist Church’s finance agency has approved a monthly stipend for active bishops who serve more than one episcopal area in this time of disruption.
Human Rights

United Methodists alternately expressed fear and contentment with the U.S. Supreme Court decision released June 24 that holds there is no longer a federal constitutional right to an abortion.
Bishops