The Western Jurisdiction College of Bishops filed a motion asking the United Methodist Judicial Council to reconsider its ruling in the case of a gay bishop.

The motion, dated June 12, contends that the ruling unlawfully changes the definition of “self-avowed practicing homosexual.”

Part of the court’s ruling in Decision 1341 was that a same-sex marriage license, together with the clergy person’s status in a same-sex relationship, was a public declaration that the person is a self-avowed practicing homosexual.

“The Western Jurisdiction’s College of Bishops believes it has an obligation to the wider LGBTQ community in the church and beyond to point out what we think are fundamental errors in church law contained in the decision,” said Richard A. Marsh, chancellor of the Rocky Mountain Conference.

Marsh and Llewelyn G. Pritchard were the Western Jurisdiction counsel during a Judicial Council oral hearing on April 25. The hearing focused on a request from the denomination’s South Central Jurisdiction for a declaratory decision about the election of a gay bishop. 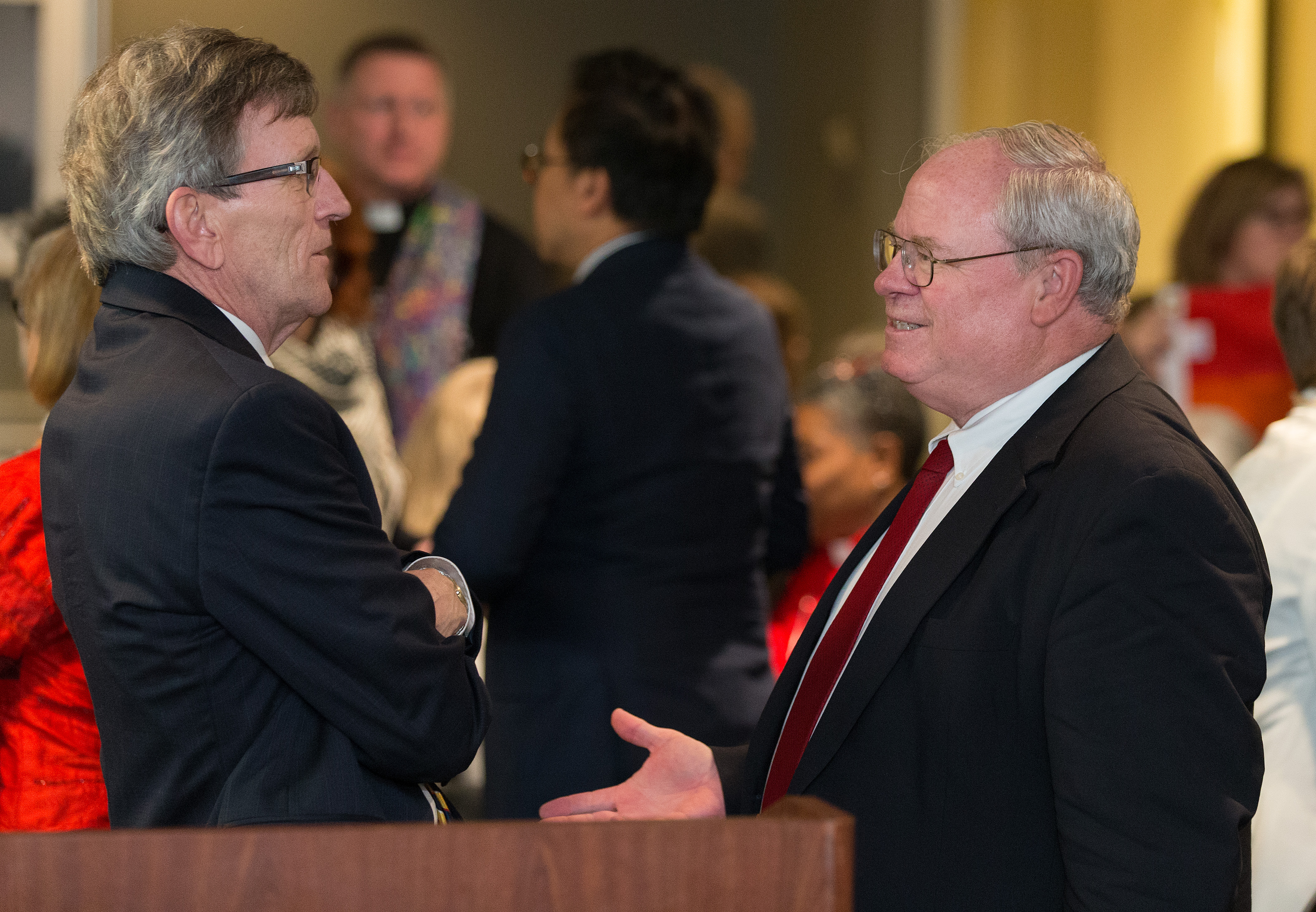 Richard A. Marsh (left) and the Rev. Keith Boyette visit one another after making oral arguments about whether a gay pastor can serve as a bishop in The United Methodist Church before the United Methodist Judicial Council, meeting in Newark, N.J., on April 25. The two argued opposite sides of the issue. Photo by Mike DuBose, UMNS.

Although she was not specifically named in that request, Bishop Karen Oliveto, who is married to another woman, was consecrated as a bishop by the Western Jurisdiction on July 16, 2016. Oliveto now oversees the Mountain Sky area.

The Judicial Council decision found that an openly homosexual and partnered bishop may be charged with disobedience to church law. “Self-avowal does not nullify the consecration and cause removal from episcopal office but is a sufficient declaration to subject the bishop’s ministerial office to review,” the decision said. The council said it had no jurisdiction over the nomination, election and assignment of a bishop.

The General Conference definition does not permit disqualification “on an inference of sexual practice arising from common understanding and practice or from a public record, no matter how reasonable the Judicial Council or anyone else in the world thinks it might be to draw such an inference.”

The motion also argues that the decision violates the presumption of innocence, creates a new chargeable offense and treats the Social Principles as church law.

“The motion for reconsideration is without merit and raises no issues that have not already been raised and addressed by the Judicial Council,” said the Rev. Keith Boyette, who was counsel for Dixie Brewster, the maker of the original motion for a declaratory judgment.

“I anticipate that the motion for reconsideration will be denied,” said Boyette, pastor of Wilderness Community Church, Spotsylvania, Virginia.

Marsh did not speculate about the outcome. “I can’t predict what they might do with this [motion], but the Western Jurisdiction’s College of Bishops thought it was important to at least place in somebody’s record that we really believe they have created new law,” he explained.

The Judicial Council secretary will notify those requesting reconsideration in writing as soon as the votes of the members are received. If approved, the reconsideration will be placed on the court’s October meeting docket. If denied, that action will be reported with the other decisions made at that meeting.

The secretary must receive all petitions for consideration by the court this fall by July 15. The full docket will be posted on the council’s website at least 90 days prior to its Oct. 24-27 session in Los Angeles.