But Milford’s work with books-in-progress has been interrupted by work with books centuries old. So he puts on his gloves, and brings other tools to bear.

“I was standing over a book printed in 1521 with an iPad in my hand as I entered the author’s name into the search engine,” Milford recalled. “That essentially said it all in terms of the changes in publishing.”

The United Methodist Publishing House will soon move within Nashville to smaller office space designed to be essentially paperless. It’s another step into the digital future, along with the closing of the Cokesbury bookstores in 2013. 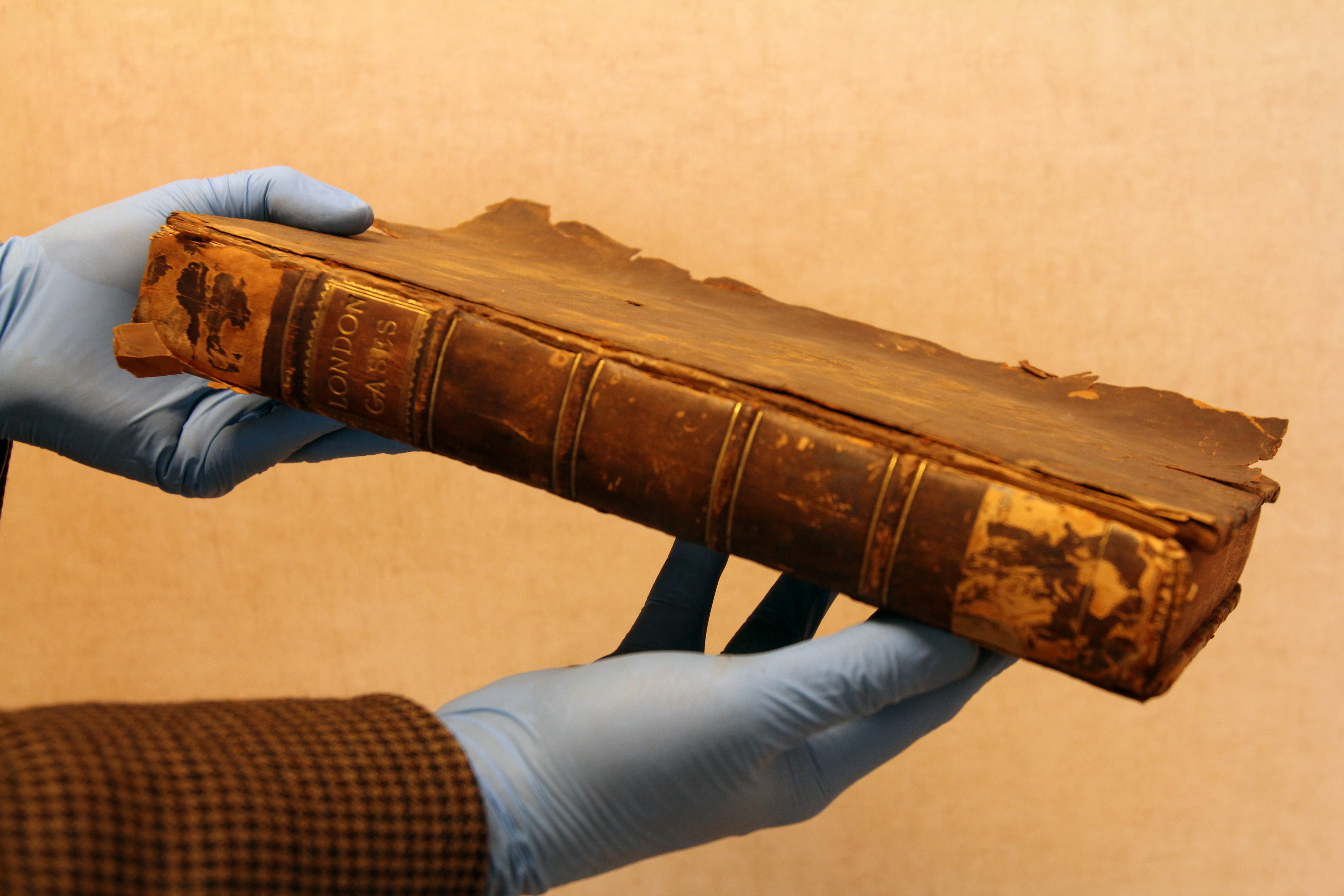 A Collection of Cases and other Discourses lately written to recover Dissenters to the Church of England" (London) 1694,  is one of the Rare books found in the archives of the United Methodist Publishing House in Nashville"  Photo by Kathleen Barry, United Methodist Communications

But the move has been complicated — in a good way — by a collection of rare books and hand printing presses that found their way to the publishing house over generations.

The oldest books, including the one Milford was researching, date to the 16th century. The collection includes what’s believed to be a 1611 first edition of the King James Bible.

Getting a better handle on the old stuff and deciding what do with it are punch list items for Milford and others as they prepare for the big move.

“What we want to do is know all that we have and its current value,” said Neil Alexander, president and publisher. “There’s financial value, but there’s also relevancy and interest in the life of the church.”

The Methodist Episcopal Church was established in the United States in 1784, and within five years had a publishing house in Philadelphia. The Methodist Book Concern, as it was called, was led by clergyman John Dickins. He had the title “book steward.”

The Book Concern would soon move to New York. Under another important early leader, Nathan Bangs, it would open a branch in Cincinnati — the Western Book Concern.

Many of that library’s rare books came from the Western Book Concern at its 1939 closing. Other Methodist-affiliated publishing operations, as they shut down, also bequeathed books, printed sermons and tracts, and even hand printing presses to the publishing house.

`You must come see this!’ 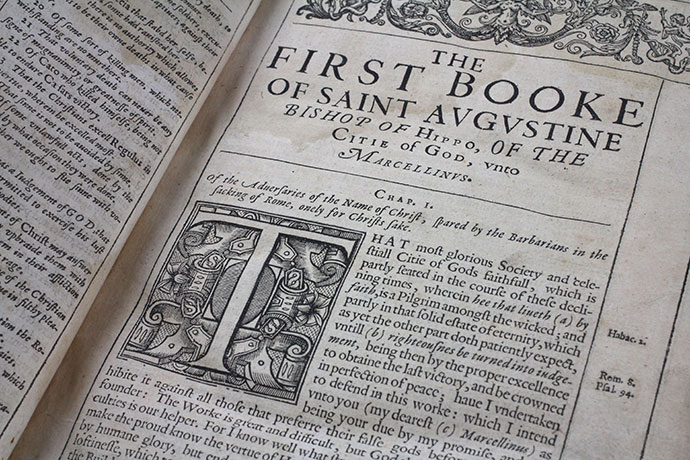 Milford has lately led staff in photographing and writing descriptions of about 80 old books.

The large, ornately printed 1611 King James Bible (missing its title page) is among them, as is a 1610 edition of St. Augustine’s “Of the Citie of God.” The group includes a 1640 edition of William Chillingworth’s “The Religion of Protestants; a Safe Way to Salvation,” and a 1521 edition of Tertullian’s “Opera.”

It’s unclear who sent the books to Nashville. But there’s a clue in so many of them having a bookplate or some other marker from the Western Book Concern.

“Our speculation is that there was an editor there who had a specific interest in collecting these old theological books,” Milford said.

Working with Milford has been the Rev. Richard Heitzenrater, emeritus professor of church history and Wesley studies at Duke Divinity School, a former seminary librarian and an authority on early printing and book binding techniques.

Milford said interruptions by Heitzenrater have been common.

“He would often say, `You must come see this!’ and then point out a handwritten side note or a wear mark or special lettering,” Milford said.

“The whole collection caught my eye,” he said. “There are scads of beautiful examples of printing.”

The publishing house library has about 1,000 newer – but still old - items related to John Wesley and early Methodism, including sermons, tracts and hymnals. One early ordination certificate was signed by Methodist leader Francis Asbury.

The collection includes seven hand presses, some dating to the 1800s.

“We’ve had some consultation with a Nashville hand printer, who’s been giving us some guidance about what we have,” Milford said.

The publishing house, a self-sustaining part of The United Methodist Church, has sold two of four parcels in downtown Nashville, where it has long been based. A third — including the main office building — is under contract and set to close in mid-May. 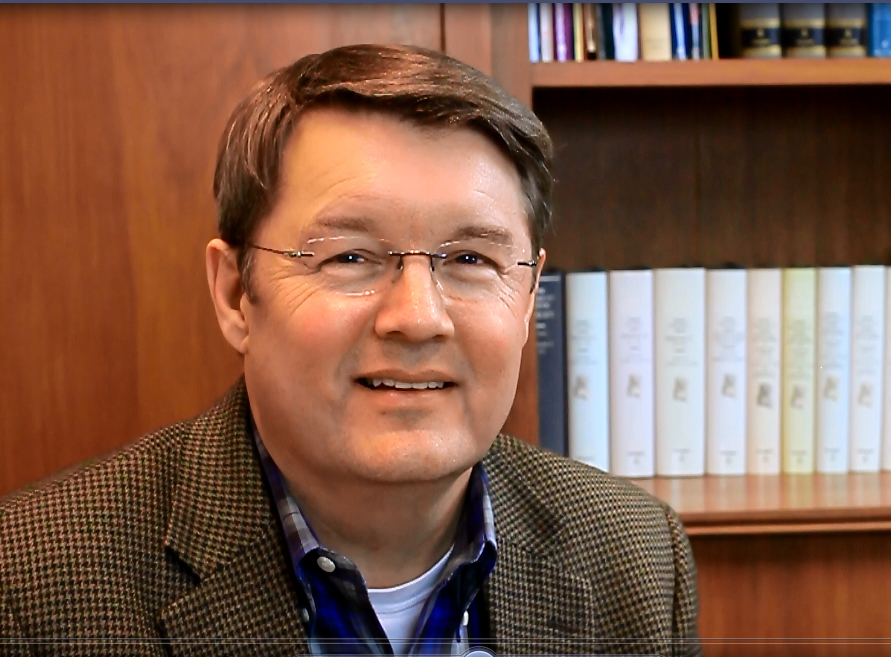 By May’s end, operations should be fully moved to Nashville’s MetroCenter, about five miles away. The combined sales are about $45 million, with the purchase of the MetroCenter property and renovations costing about $27 million.

Much of the difference will go toward funding pension obligations to current and past employees, Alexander said.

But the move also is an effort to stay agile and relevant in an era when online book sales, e-books and e-readers have claimed a big part of market share.

“Our whole impetus in the move is to go digital as much as possible,” Alexander said. “We’re moving to what they call a paperless office. There’s no such thing yet, but it’s largely paperless.”

Even so, plans call for an editorial library in the new headquarters, which will be called John Dickins House. The Publishing House will still sell and distribute new books made of paper and ink.

Some of the older books and the printing presses will be kept and likely exhibited. Other materials may end up with the United Methodist Commission on Archives and History, or perhaps another United Methodist-related library or archives.

Alexander said the current inventory must be followed by a professional assessment of the value of the older books. (The King James Bible needs to be authenticated as a first edition.) After that, the publishing house’s board must decide what to do with the books.

That may all happen before the move. If it doesn’t, Milford said there’s a plan for taking good care of the older materials in the interim.

Milford’s life has been hectic with the move looming, but he’s also had moments of reflection, particularly when he dons gloves and holds one of the old books.

“They are incredible reminders of our past and the tools that have carried us thus far, not only in our faith journey but also in the history of religious publishing.”

The United Methodist Publishing House, hard hit by the pandemic, has finalized some planned changes, including the sale of its Nashville property and transfer of a pension plan to Wespath.
Faith Stories

Thanks to better sales as the pandemic eases in the U.S., as well as a real estate move, the United Methodist Publishing House appears in better shape financially.