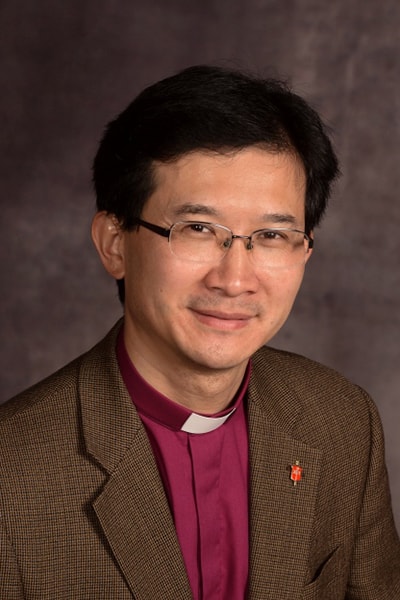 Bishop Eduard Khegay.
Photo courtesy of the Council of Bishops.

I am a child of the Cold War. I grew up happy in my family and my country, but aware of an enemy who wanted to destroy us. I was born in 1970 in Kazakhstan, Soviet Union, and I remember the drills in my school when we had to put on gas masks and hide under the table. The imaginable enemy was attacking us from the West and threatening us with nuclear missiles. We had to be always ready. Disassembling and assembling an AK-47 as fast as you can was an important drill to practice in the shadow of enemy’s attack on our land.

So, when I got to the Bauman Moscow State Technical University it was an honor to have a special military class where we learned about the nuclear missiles of the U.S. army. Training days at the ZRK S-200 missile system were part of our education. Our colonel would teach us that as Soviet engineers, we would have to build better missiles. It was the late 1980s, the beginning of the 1990s. We were not supposed to share our knowledge with anybody for 15 years.

But things were changing rapidly.

On Nov. 9, 1989, the world witnessed the fall of the Berlin Wall — the wall that had divided West and East Berlin, and indeed the whole world, since 1961— and many of us in the Soviet Union hoped that finally life was going to be better.

Everyone breathed with freedom. Our country became open for the gospel. Missionaries came to our land. So many of us in Eurasia became Christians because of United Methodist mission work. We realized that we can be in unity together and do many great things. We did not want to build walls; we wanted to build bridges.

The word unity has been on the United Methodist radar a lot recently. Some emphasize the importance of working for unity in the midst of our disagreements. Others criticize the lack of actions as different parts of the church do things opposite of unity. All these tensions bring us back to the question: “What is unity?”

The word comes from the Latin word “unus,” which means “one.” The Russian word “edinstvo” (unity) comes from the word “odin” (one). Some dictionaries define unity as the state of being united or joined as a whole.

Unity is also defined as the state of forming a complete and harmonious whole. That is what I felt about our global United Methodist Church when the Russia/Eurasia Initiative was starting in early 1990s. I felt like we were spiritual orphans in the desert who were found and adopted by a loving God and a loving church.

Now I feel differently. One dictionary describes unity as a thing forming a complex whole. I feel that our global church became a very complex whole where we cannot function harmoniously. When I read news about our global church, I feel like we in Eurasia are abandoned, much as children of divorcing parents. As a child of divorced parents, I remember feeling betrayed for many years.

During the Soviet Union era, two congregations in Uzhgorod and Kamyanitsa in Western Ukraine were the only Methodists in the Eurasia Episcopal Area.

Pastor Ivan Vuksta experienced persecution by the KGB and was fired from several jobs because he was a Christian Methodist leader.

He shared his joy that our churches in Western Ukraine were connected with sisters and brothers in Czechoslovakia, Estonia and Hungary. Belonging to a worldwide Methodist family played a significant role in their ministry during the turbulent history of the 20th century.

The Uzhgorod United Methodist Church building, purchased through the partnership with Methodists from Oklahoma in 1923, also has an amazing story. The Methodist Episcopal Church, South, invested in this partnership to help our sisters and brothers in Uzhgorod to have their own place for worship. However, the Soviet government confiscated this building, not returning it until 1992. In September 2017, we celebrated the resumption of worship at the historic building.

We have many stories like these in Eurasia and I am sure you have many inspiring stories in your area how God builds bridges worldwide and help us make disciples of Jesus Christ together. Souls are saved, lives are transformed, God is glorified.

As a bishop of the church, I am called and committed to work for unity. I do that regularly when I visit United Methodist churches in my area and worldwide. I teach peaceful and loving relationships, conflict resolution, emotional intelligence, forgiveness, reconciliation and listening. I believe that God can transform our relationships into much better relationships than we have today.

My favorite illustration on unity comes from the movie “Gladiator.” When the main hero Maximus and his fellow gladiators are brought to the Coliseum in Rome to fight in the arena, he gives lifesaving instructions: “Whatever comes out of these gates, we have a better chance of survival if we work together... if we stay together, we survive.” And they did. They won the battle because they worked together.

Christians can produce much fruit for the Kingdom of God if we work together in unity and love. Jesus taught us to love one another: “By this everyone will know that you are my disciples, if you love one another” (John 13:35 NIV).

The Apostle Paul, who was not perfect in his relationships and practiced Christian faith and love in the midst of worldly influence, taught us to live in unity:

“As a prisoner for the Lord, then, I urge you to live a life worthy of the calling you have received. Be completely humble and gentle; be patient, bearing with one another in love. Make every effort to keep the unity of the Spirit through the bond of peace. There is one body and one Spirit, just as you were called to one hope when you were called; one Lord, one faith, one baptism; one God and Father of all, who is over all and through all and in all” (Ephesians 4:1-6 NIV).

What strikes me about this passage is that before Paul addresses unity he writes about important aspects of the Christian character — humility, gentleness, patience and love.

This signals to me that we need to practice these things first as we strive for unity. Also, all these characteristics do not come on our own, we learn them through our relationships.

Paul also encourages us to “Make every effort to keep the unity of the Spirit through the bond of peace.” He inspired Christians of his time to do that, knowing that reality of life is far from perfect.

What should United Methodists do now, when many among us think that we have made every effort to keep the unity, but things only get worse? Many General Conference delegates have a hard time thinking about anything on the agenda except the present conflict on the issue of human sexuality. Some leaders meet and develop plans for amicable separation or birthing new expressions of United Methodism. Others believe that the truth is on our side and this is our righteous Stalingrad battle, which means we are ready to bleed and die but we will not move a bit.

It is painful to experience this reality. As a bishop of the church, I struggle with keeping the unity and supporting division.

But looking at The United Methodist Church today, with its divisions in the U.S., neocolonialism, economic and political manipulations, I would agree that we made every effort to keep the unity and I am ready to accept the birth of new expressions of United Methodism. I pray that we do it peacefully and respectfully. But even if we agree on that in May 2020, that agreement would be just the first of many more steps into the new future.

I call on all United Methodists to prevent building of a United Methodist Berlin Wall that can invisibly separate the world of Christian believers. Let us not repeat the mistakes of the Cold War era. Let us not follow the political divisiveness of today’s rhetoric. Let us live with respect for one another even if we form new expressions of Methodist movement.

On Nov. 9, the world will celebrate 30 years since the fall of Berlin Wall. My prayer is that we do not build walls anymore. I pray that we build bridges. I pray that we resist the temptation to repeat the history of the Cold War divisions and act as people called Methodists. Let us prevent a United Methodist Berlin Wall.

Even if the global denomination will not be as we knew it in 1990s, I pray that Methodist people of the East and West will continue to share love with one another, to strive to be as Apostle Paul calls us to be.

Let us build bridges, not walls.

Nearly half of people who took a survey about attitudes about Jesus and Christianity said believers are giving and loving. But a significant minority say they’re hypocritical and judgmental. United Methodist professors and pastors offer thoughts on the poll results.