Consider an African proverb: “If the lion does not tell its story, the hunter will always be the hero.”

“Persons who are depressed and oppressed have a tendency not to tell their story,” said retired Bishop Forrest Stith, who played a pivotal role in founding the African American Methodist Heritage Center in 2001 to document the history of Black Methodists.

Without the center, “the story of Methodism is told by those who are in a better position,” he added, “which leaves an incomplete story.”

The heritage center exists to preserve and tell the story of African American Methodists. Its leaders would like to add to its collection and make it more accessible, but major fundraising is needed after a fallow period caused mostly by the coronavirus pandemic. There’s also been a tightening of finances in the denomination as leaders anticipate a split over sexuality policies. 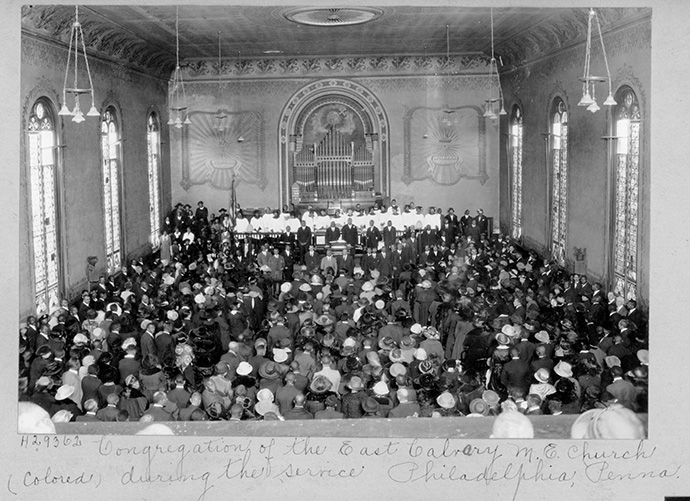 While there are financial impediments to preserving their legacy, Black churches face more immediate issues such as maintenance of church buildings and the need to pay pastors what they’re worth, said Stith, president emeritus of the center’s board of trustees.

The stakes are high for Black churches, he believes.

“When churches lose their tradition and history, they lose their reason for being and … they have no motivation to push forward,” he said.

“Their histories, faiths and contributions have been subsumed under whiteness,” she said. “The African American Methodist Heritage Center corrects this. It places United Methodist African Americans at the foreground and ensures that their histories, faiths and contributions to our larger narratives are collected, preserved and promoted.” 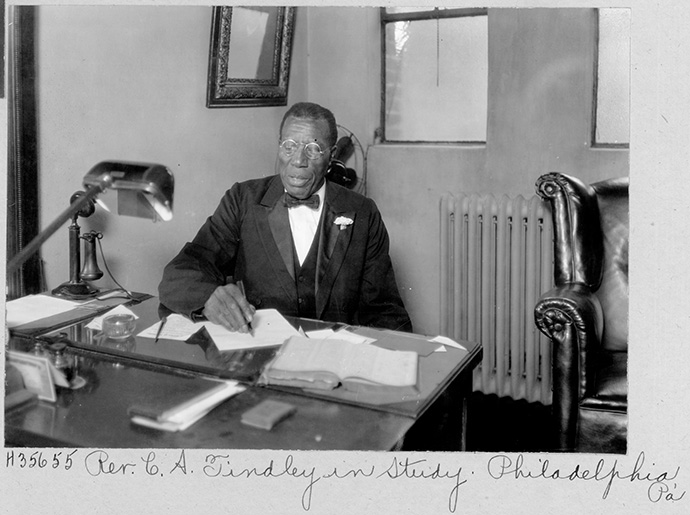 The Rev. C. A. Tindley works in his study in Philadelphia. Tindley served as a pastor in the Methodist Episcopal Church and was a noted gospel music composer. Photo © United Methodist Commission on Archives and History.

Black Methodists for Church Renewal, the Black caucus of The United Methodist Church, conceived the center. Stith was asked to lead the effort and he established a task force that organized the new organization as a standalone not-for-profit entity.

“We sent out the request to all 2,000-something of our churches that we had addresses for, and asked them for information,” Stith said. “Probably hundreds have sent in journals and pictures and all kinds of stuff that reflect their story.”

Some churches maintain their own exhibits of their history, he said. But the facilities at Drew are a good option to preserve artifacts and documents indefinitely. 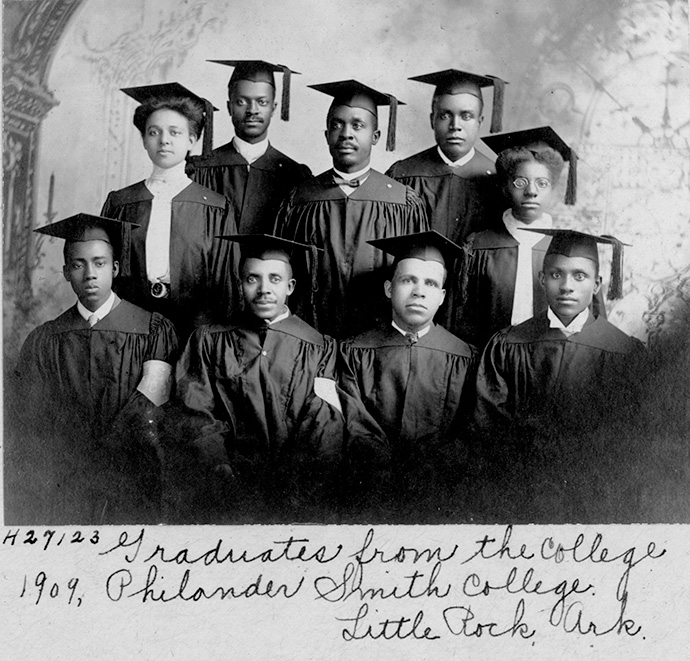 In 2017, the General Conference, which had provided $100,000 per year in funding for two quadrennia, stopped allocating money to the center. COVID-19 was also a blow, since the center’s most effective fundraisers have been in-person events.

Stith does not anticipate getting any money from the General Conference in the near future. 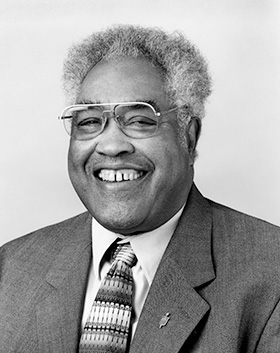 “They're looking for ways to cut — not ways to raise — and that’s unfortunate,” he said. “We did our best work when we had support from them. … We did workshops all across the country.”

The center sells memberships for $25 year and has been depending on small contributions in recent years, Stith said. There have been larger donations occasionally, such as a $10,000 gift from the Holston Foundation in March.

“We have to ensure the longevity of such an important center if we are ever to fully atone for the racist sins of our past and seek more equitable futures,” Dreff said. “I've been so lucky to get to know those who work at the AAMHC to ensure its importance and survival. (Archives and History) will continue to support the AAMHC in any way that we can and I challenge the denomination to join us in this effort."

A name change is a possibility down the road, said Mollie Stewart, a longtime denomination leader and president of the center’s board of trustees.

“When you say ‘Heritage Center,’ what does that mean to you?” she said. “If you've never heard of it, you think that we have a center somewhere.”

In fact, the AAMHC doesn’t even have an office, she pointed out. 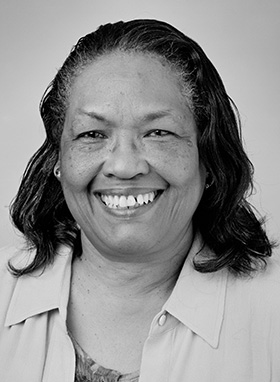 Mollie Stewart serves as president of the board of trustees for the African American Methodist Heritage Center. 2004 file photo by Mike DuBose, UM News.

“We're going to let (the name change idea) rest right now,” Stewart said. “Because unless we find some funding, (the AAMHC) is not going to be there.”

One exciting project that has made good progress is an oral history collection. Interviews with bishops and their wives who served in the old Central Jurisdiction are on file and waiting on a method of dissemination, Stith said.

The Central Jurisdiction was formed in 1939 because Southern churches wanted a separate jurisdiction for African Americans. It was abolished in 1968 when the merger of the Methodist Church and the Evangelical United Brethren Church created The United Methodist Church. Today’s “central conferences” in the church refer to conferences outside the U.S.

Getting younger people interested in the history of Black churches is the key to the future, Stith and Stewart said.

“I'm 82 years old and I have a little technology, but not like these young folk who grew up with all this in their brain,” Stewart said. “We need a better website and number two, a better marketing plan.”

It’s important to remember that “our history is as important as any other history,” Stewart said.

“We're not just stepchildren here. We are full-fledged family,” she added. “Family needs to be protected. It needs to be preserved.” 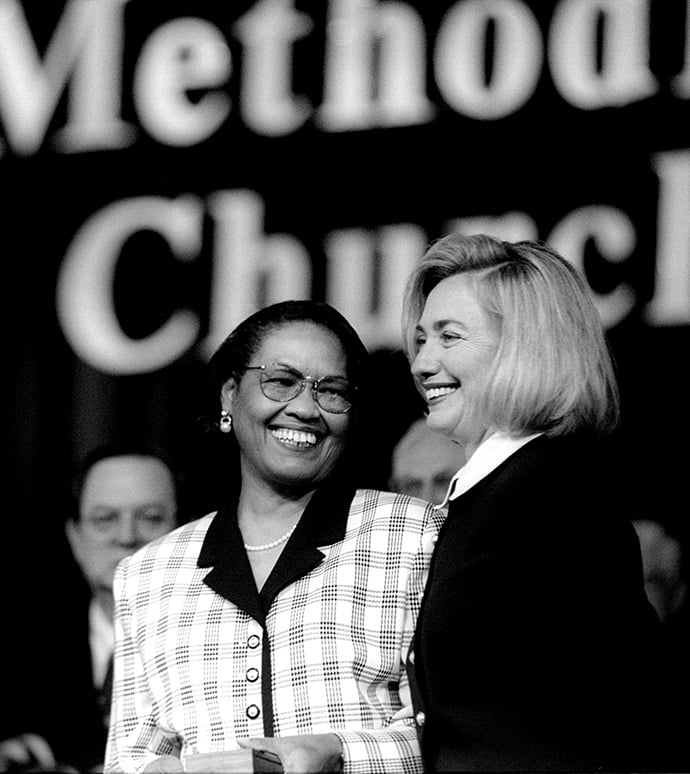 Whether in school or the workplace, the Rev. Margret Powell experienced hostility and ridicule as a person of color, but she persevered.
Faith Stories

Wesley Theological Seminary is the final resting place for longtime professor and “Songs of Zion” champion the Rev. William Bobby McClain, following a service of the interment of his ashes.