In South Pacific island nations like Tonga, children are learning firsthand about the impact of global warming as they prepare for the reality that they eventually may have to evacuate their homes.

“Some of them may be the last generation to grow up in some of these islands,” said the Rev. Ikani Fakasiieiki, an elder in the Methodist Church in Tonga who teaches religious studies at Eastern Washington University in the U.S.

That was the somber undertone of a festive May 12 climate vigil at the Oregon Convention Center’s outdoor plaza during General Conference 2016. 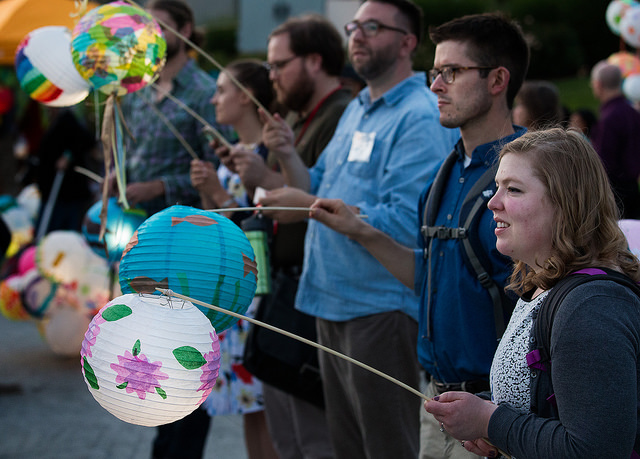 Katie Crise (right) holds a lantern lit by a solar powered lamp during the General Conference Climate Vigil at Oregon Convention Center Plaza in Portland. The vigil was held to call attention to climate change during the meeting of The United Methodist Church's top legislative body. Photo by Mike DuBose, UMNS.

The twilight event, organized by the Pacific Northwest Conference and backed by a number of church-related sponsors, featured decorated paper lanterns lit by small LED lights, music and testimony from United Methodists representing the global church.

A couple from Trinity United Methodist Church in Seattle, Andrew and Mary Stanton-Nurse, greeted people entering the plaza. The church has a “rain garden” and is a greening congregation, a designation given by Earth Ministry, a faith-based environmental stewardship that has office space at Trinity.

Laura Baumgartner, a United Methodist seminary intern with Earth Ministry from Seattle University, said the group encourages people “to find their voice and stand for creation.”

Much of the advocacy work in the Pacific Northwest revolves around the ports and fossil fuel exports. United Methodist pastors in Tacoma, Washington, she noted, took the lead in a recent protest against a proposed methanol plant there. Plans to build the plant were cancelled.

“One of the big hearings was on Ash Wednesday, so we had ashes outside of the hearing, and we were able to give witness in the hearing,” Baumgartner said.

Evident across the connection

As he helped welcome those gathered for the vigil, Bishop Grant Hagiya of the Greater Northwest Episcopal Area noted the effects of climate change evident throughout the United Methodist connection.

In his area, the effect is particularly visible in Alaska. “In the winters, there used to be huge ice blocks on the seas,” he said. “Now they are gone.”

The Rev. Carlo Rapanut, Alaska Conference superintendent, pointed out that “record-making, low-snow winters” in the past few years have reduced the permafrost, which releases more carbon into the air and brings a dryness that helps spark wildfires.

Across the globe, in the Democratic Republic of Congo, the shortened rainy season already has had a negative impact on crops. “We have to tell God to give people love, the love of nature,” said Claudine Blessing Kasongo, who also provided French translation during the vigil. “People are cutting trees in my country, but they are not planting them.” 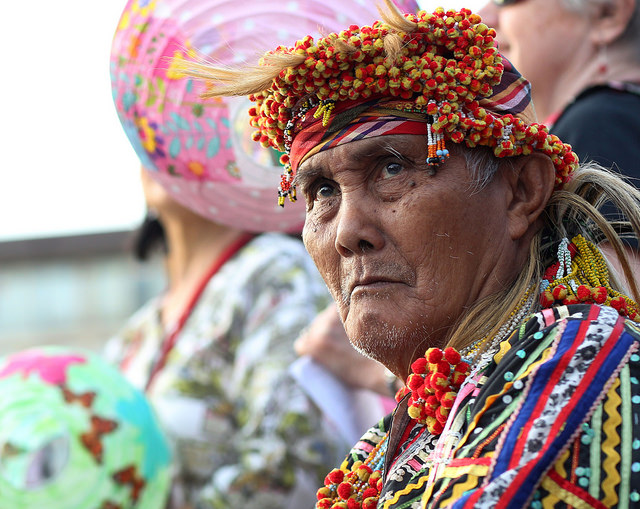 Challenges in the Philippines

The Rev. Jeanelle Ablola, co-chair of the California-Nevada Conference Philippine Solidarity Task Force, said the Philippines is “among the top three countries to be affected by climate injustice” and added that corporations and the military, including the U.S. military through its presence there, contribute to the injustice.

When indigenous farmers in the Philippines, the Lumads, mobilized on April 1 to call attention to how climate change is causing famine, fully armed police attacked them, and three farmers were killed.

The frontline struggle in the Philippines also includes dealing with typhoons that have increased in intensity as ocean surfaces temperatures rise from global warming, explained April Mercado, a special projects manager for United Methodist Communications.

Days after Typhoon Haiyan made its devastating hit in 2013, Mercado met a coconut farmer with nine children whose wife and three youngest children had been swept away by the storm surge. “He could not do anything to save them because he was thinking of his six other children and who will take care of them after the storm has passed,” she recalled.

Still, the man was thankful to find their bodies and provide a proper burial. And, she noted, the Filipino people have become more resilient in responding to typhoons and other climate issues.

“I proudly say that the Filipino spirit is waterproof,” Mercado declared. 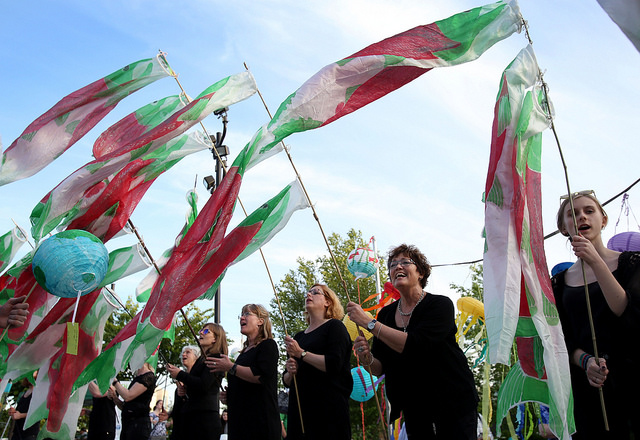 Members of the KEFAS Choir from Denmark wave salmon wind socks during the May 12 General Conference Climate Vigil at Oregon Convention Center Plaza in Portland. Photo by Kathleen Barry, UMNS.

United Methodist Women already has developed practical tools to tackle the issue of climate justice, said the Rev. Kathleen Stone, UMW executive. She encouraged those present to use the tools and to attend the Mission U studies on climate issues that UMW is offering in the denomination’s conferences this year.

The Rev. Susan Henry-Crowe, top executive of the United Methodist Board of Church and Society, would like to see a commitment “to act in solidarity with all who struggle daily in the face of a changing climate” shared across the denomination.

“Our church has spoken clearly through the Social Principles and the Book of Resolutions, and I pray and trust that this General Conference will reaffirm our commitment to this important and holy work,” she told the gathering.

Some delegates attending the vigil indicated they are ready for such a commitment.

Ferdinand Valdez and Julius Bendita, delegates from Northeast Luzon Philippines Conference, said they joined the vigil to continue to raise awareness and accountability and learn how to do the same thing when they get back to the Philippines.

"As a United Methodist deaconess, I believe that we must affirm, uphold and protect the integrity of creation,” said Darlene Marquez-Caramanzana, a reserve delegate from Philippines Annual Conference. “The way that things are going proves how we have neglected our environment and lost our connection with the earth.”

As the vigil progressed, the solar light bulbs in the colorful lanterns began to glow. After the event, the bulbs were being sent to the Philippines and the Congo and to survivors of wildfires in Washington State.

“These lanterns were sent to us from near and far,” said the Rev. Jenny Phillips, minister for environmental stewardship and advocacy for the Pacific Northwest Conference and the vigil organizer.

“They are decorated with the prayers of United Methodists from around the connection. These are prayers for the impacts of climate change on their communities, and they are prayers for God’s creation.”

Bloom is a United Methodist News Service multimedia reporter based in New York. Follow her at https://twitter.com/umcscribe or contact her at (615)742-5470 or [email protected]. Gladys Mangiduyos contributed to this report.

The event brought together nearly 200 members for the ordination of new leaders, lectures, worship and other celebrations.
Faith Stories