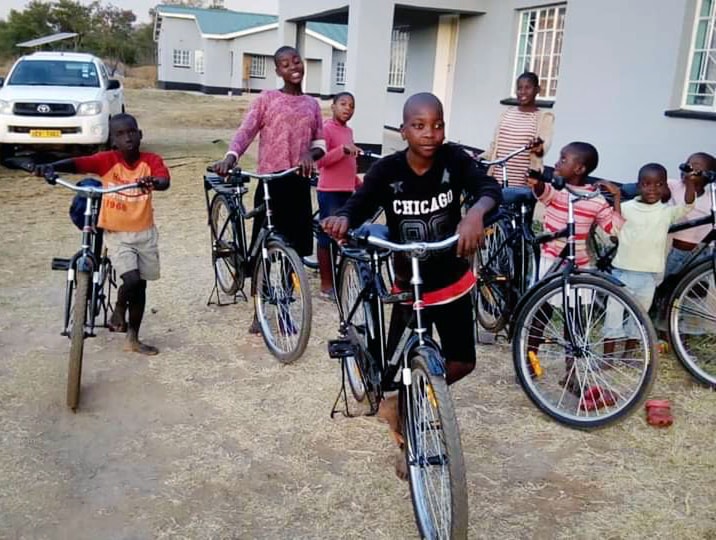 When a group of preschoolers at Dutilh United Methodist Church in Pittsburgh learned of the long distance that orphans at the Nyadire Mission’s Home of Hope were traveling to school, they agreed to hop into action.

In a display of unconditional love for children they had never met, the 3- and 4-year-olds participated in a hop-a-thon titled “Hop for Hope.” They raised enough money to buy seven bicycles, worth $175 each, for the orphaned children.

In June, a team of volunteers from Pittsburgh delivered the bikes to Nyadire Mission, the oldest United Methodist mission in Zimbabwe. In addition to the orphanage, the mission has primary and secondary schools, a college, hospital, farm and workshop. The Nyadire Connection, a nonprofit founded by a group of United Methodists in Pittsburgh, provides continuing support for the mission.

The bicycles — Buffalo Bikes from World Bicycle Relief — were assembled in Harare and brought to Nyadire. One of the U.S. volunteers, Mary Beth Zollars, even brought one along in her baggage.

“I disassembled it, packed it, then reassembled it at the Home of Hope, so that the smaller children could learn to ride,” she said. “They have such a long walk to school.”

Efforts are underway to get more of the smaller bicycles for the younger children.

Zollars has been spearheading fundraising for the home and its outreach program, Home of Hope Outreach, which supports over 350 vulnerable children in the community, paying for their education at 18 schools and providing stationery.

The bicycles are just the latest good news for the orphans and vulnerable children at the Home of Hope. In February, they moved into spacious premises built with funding from the government of Finland and support from The Nyadire Connection.

“About 50 hectares (almost 124 acres) has been allocated for the new home and farmland for the 16 children residents at Nyadire (Home of Hope),” said the Rev Lancelot Mukundu, Nyadire Mission station chairperson.

The Finnish government contributed over $300,000 USD for the new infrastructure comprising two duplexes, each with two homes, an administration block and a house for the administrator.

“Each house can accommodate up to eight children and provides a home setting with a mother who looks after the children. They live like any other rural children and also do household chores,” Mukundu said.

Emmanuel Chiimba, Home of Hope administrator, said the old site would get waterlogged during the rainy season and did not have space for income-generating projects.

“The new home is an ideal site. There is good arable land; it is spacious and we can conduct a number of projects on it,” Chiimba said.

The children already have horticulture fields, a piggery with 22 pigs, and eight cattle. They intend to venture into poultry and fishery projects.

Nyadire Home of Hope was the brainchild of the late sister Rut Lundgren, a Finnish missionary nurse who lived at the mission for more than 35 years. Rut, who never had any children, was an orphan herself and lived by the adage, “Every child needs to be held.”

The home opened its doors in 1999 and today, the youngest members are 5-year-old twins who have lived there for about four years.

Drew Harvey of The Nyadire Connection said his organization sends funds each month to cover the majority of operational costs, such as staff salaries, food, medical care, school fees and clothing.

“(The Nyadire Connection) finds three to four sponsors for each child and that sponsor pays $40 (USD) per month and has a close communication link with frequent letter exchanges,” Harvey said.

“The relationship with the kids at the Home of Hope is a very special part of The Nyadire Connection. We’ve watched many of the kids grow up, and some we are now sponsoring in advanced education.”

Harvey said Home of Hope was one of the first areas The Nyadire Connection started working with when it formed back in 2006.

“It remains a very foundational program for (us),” he said.

Under Zimbabwe laws, orphans and vulnerable children are returned to the Department of Social Welfare once they reach 18 years old and they are then handed over to relatives if they have been located.

The Nyadire Connection continues to support those who would have left the Nyadire home but need training to become self-reliant; there currently are 14 beneficiaries of the Sister Rut Scholarship studying at various tertiary institutions.

He described the relationship with The Nyadire Connection as special.

“The Nyadire Connection is reliable. It is a grouping of people who are compassionate about what they are doing,” he said.

During a 2001 visit to the Fairfield Children’s Home, a South Carolina mission team promised to return. In October 2022, their team leader joined Africa University’s 30th anniversary celebration.
Mission and Ministry