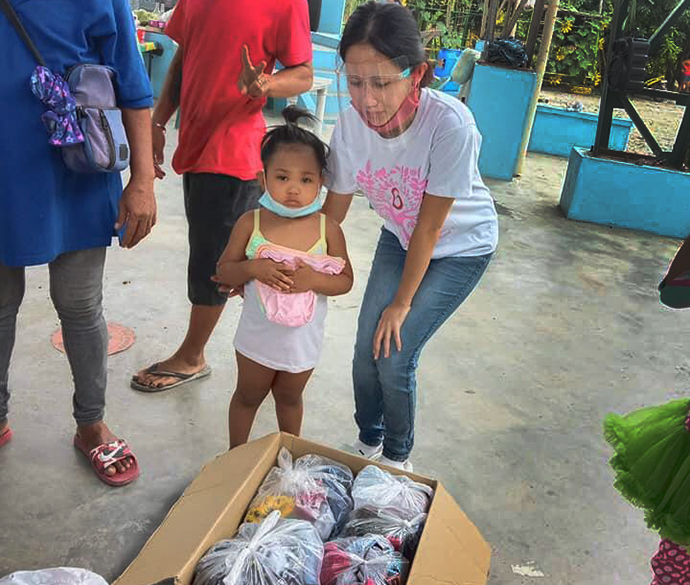 Jazel Resurreccion Lustre, a volunteer teacher in Bulacan province, helps a child from the Longos neighborhood, which was devastated by fire. The September blaze destroyed 28 of 108 homes in the impoverished community. Photo by Emily Sison.

A poor neighborhood in the suburban town of Pulilan was already struggling with the COVID-19 pandemic when a fire destroyed 28 of the community’s 108 houses in early September. The town is in Bulacan province, in the Central Luzon region.

Larren Jo "LJ" Basilio, the national president of the United Methodist Youth Fellowship, was in an online discussion with a Bulacan-based volunteer teacher, Jazel Resurreccion Lustre. They were working on plans to produce videos for online learning when Lustre noticed smoke and dust.

Basilio was then at Kapatiran-Kaunlaran Foundation Inc., where he works as the coordinator of the Alternative Learning System program. The foundation is the social development arm of The United Methodist Church in the Philippines.

While chatting, Lustre noticed smoke and dust were blurring the screen of her smartphone.

"Is there a fire nearby?" she asked. After learning a fire was raging in the dumpsite area called “Looban” in Barangay (Village) Longos, Lustre said her heart sank.

Most of the Alternative Learning System’s high school scholars as well as children in the foundation’s Supervised Neighborhood Play program live in Looban.

The students’ families survive by sifting through what others have discarded and selling whatever they can salvage.

"Go there right away and see what you can do to help our students and their families," Basilio told Lustre. Lustre hurried to the location and snapped several photos that she posted on social media.

She witnessed panicking residents trying to salvage whatever they could from their burning shelters, made of plywood and thin, galvanized iron roofs. They were only able to carry a few clothes, their treasured small television sets, and whatever they could pick up along the way as they tried to save themselves, she said. 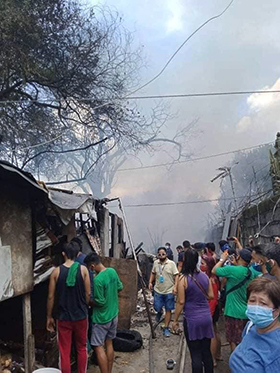 Residents of the Longos barangay, or neighborhood, watch as smoke billows over their neighborhood. A September fire destroyed 28 of 108 homes in the impoverished community in Bulacan province.

“The fire left almost nothing,” said resident Archie Miralles, as he sifted through the burnt ruins of his home, trying to find something that could still be of use to him and his family.

“Perhaps it was a divine intervention that tonight is the regular care group of BulPAC UMYF,” Policarpio remarked, referring to the Bulacan Conference’s youth fellowship.

The United Methodist young people also talked with and prayed for the residents of Barangay Longos, especially the fire victims.

Policarpio and the fellowship’s district officers said the foundation’s theater group, Teatro Kapatiran, helped them see the poverty situation in the Philippine society when it presented a play during the 3rd National Youth Council Meeting of the youth fellowship last year. The play depicted the realities in all three areas the foundation is serving — the Manila North Cemetery and Tondo District in Manila and Looban dumpsite in Bulacan.

“The performance was an eye-opener,” Policarpio said. “It sowed a desire in our hearts to share what we have with the people who lost their homes in the middle of a pandemic.”

On the Bulacan Conference youth fellowship Facebook page, conference youth leaders posted: “Let’s continue to spread the love of Jesus Christ through helping our neighbors in times of need.”

Nicolas is a correspondent based in the Philippines.

Funds from the United Methodist Committee on Relief’s International Disaster Response program helped purchase food and other supplies for people in Beni who have fled attacks in outlying areas.
Bishops