Pastors in United Methodist churches across Texas spoke words from Isaiah and the Gospels about passing through the waters and Jesus calming the storm to comfort people who knew firsthand the truth of water and storms.

Even as they paused to worship on Sept. 3, United Methodists continued to assess the damage to churches and communities from Hurricane Harvey. Both Bishop Robert Schnase, leader of the Rio Texas Conference, and Bishop Scott Jones of the Texas Conference visited damaged areas last week. 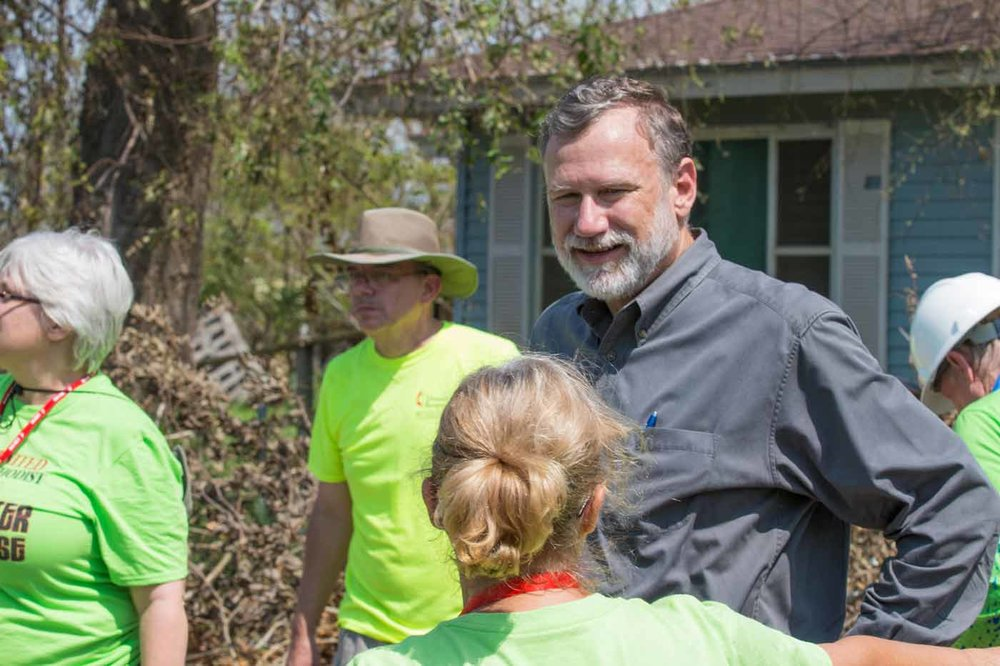 Community was crucial in the wake of the disaster.

The Rev. Chappell Temple, pastor of Christ United Methodist Church in Sugar Land, Texas, had just one service on Sept. 3, in part because so many of his folk were scattered and “because we feel the need to be all together in one place,” he said.

He preached on the passage from Isaiah 43:2: “When you pass through the waters, I will be with you.”

And he prayed using the chorus from “God Leads Us Along.”

Both the Rio Texas and Texas conferences are already hard at work delivering flood buckets and getting early response teams in the field.

“It was heartbreaking to see the devastation firsthand in communities I’ve long been familiar with,” Schnase said. “So many have lost so much.” 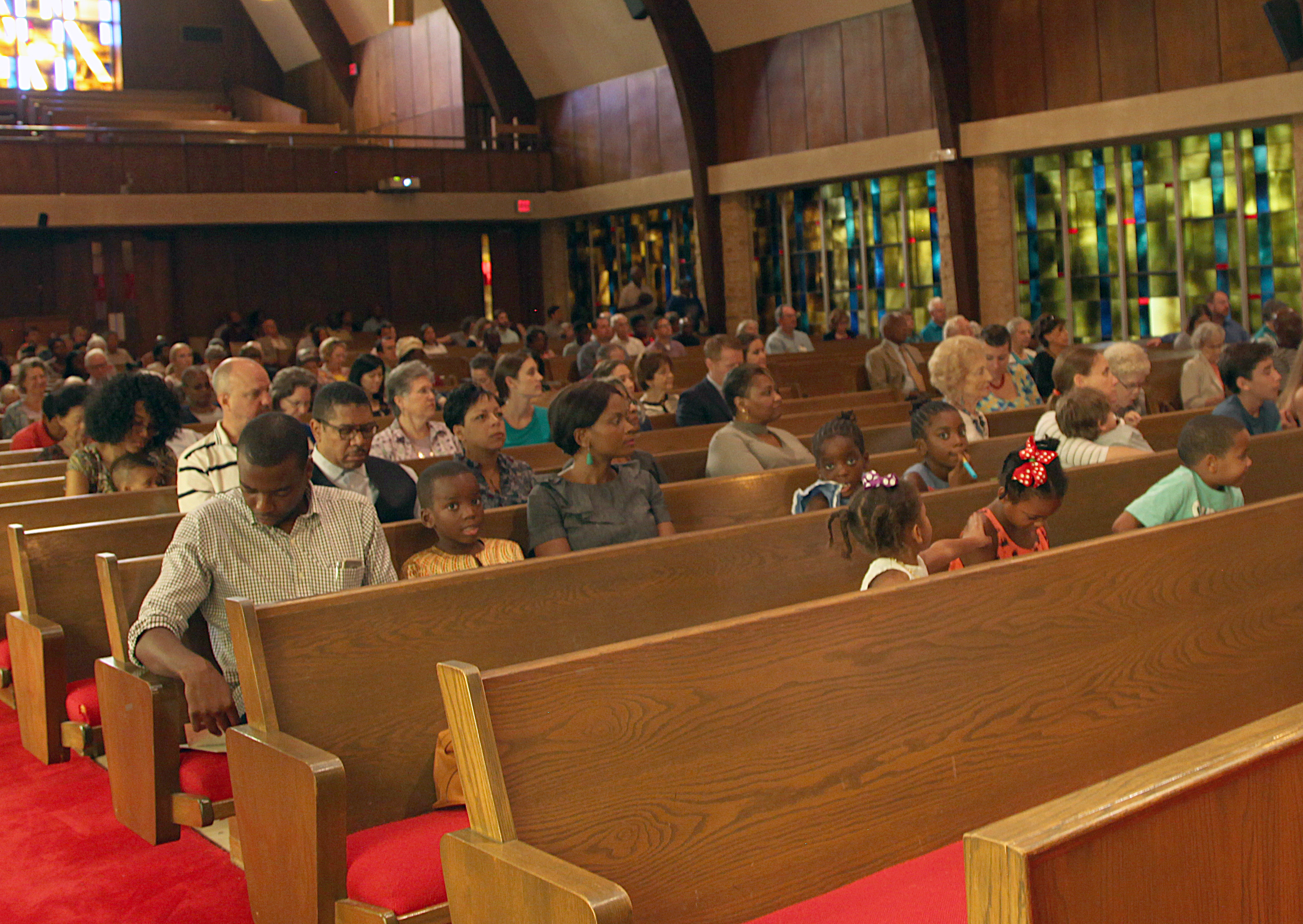 The bishop extended thanks from the conference to volunteers already at work as he toured churches damaged by the storm and met with emergency response teams, pastors and homeowners.

“It was also inspiring to see the many volunteers pitching in their time, strength and resources to help begin the long process of recovery,” Schnase said.

“I want you to know on behalf of all the churches of the Texas Annual Conference, we love you,” he said. “We have been praying for you and we will continue to pray for you.”

He thanked the congregation for already being the “hands and feet of this community.”

“This recovery is not going to be a quick fix. I am making the pledge we are going to be in this for the long haul.”

Ramirez said his church served as a temporary shelter for a few families displaced by flooding from Cypress Creek, but those families have been taken to a permanent shelter.

“We’re currently open as a supply point for families who lost their homes,” he said. Three other United Methodist churches in the area have helped with cleaning up homes and one delivered supplies for people displaced by the flooding. 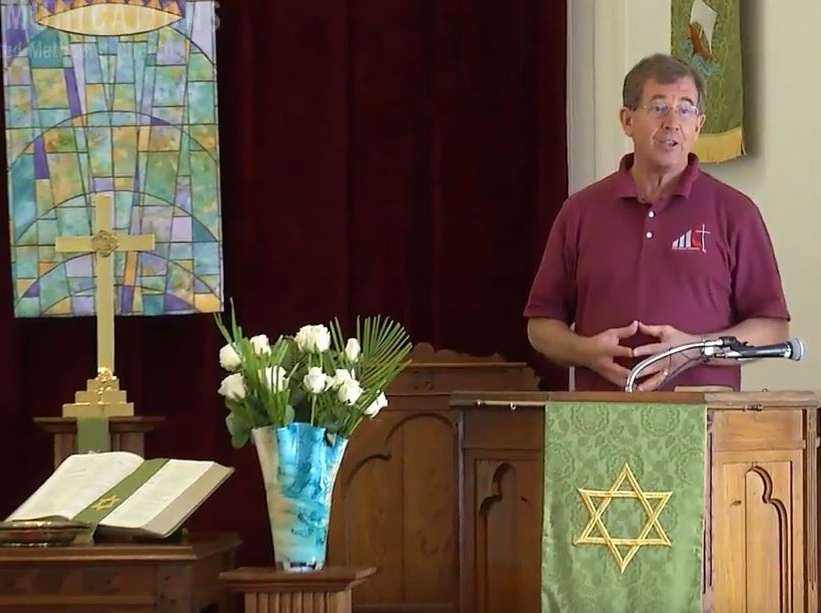 Bishop Scott Jones, the episcopal leader of the Texas Conference, speaks to those gathered for a Sunday worship service after Hurricane Harvey. Video image by Andrew Jensen, United Methodist Communications.

Members of Dickinson First United Methodist Church spent Saturday tearing out damaged pews, but sat in chairs on Sunday to hear words of comfort from their pastor.

The Rev. Jack Matkin plans in the coming Sundays to preach from Matthew 14, which is the passage about Jesus walking on water.

“The storm named Harvey is over but there is still a storm within. We can sink or walk in faith with God,” he said.

The Rev. Rhett Ansley, pastor of Wildwood United Methodist Church in Magnolia, Texas, already had a new sermon series scheduled to start and the first sermon was based on the text from Mark 4:35-41 about Jesus calming the storm. The sermon recalled the anxiousness of the disciples as they asked Jesus, “Are you going to let us drown?”

“Disaster and crisis has a way of stripping away not only belongings, but also at our emotions. In this ‘stripping,’ we have been witness to raw emotion and have seen how things that divide us seem to fall away so that the very best of who we are (who we are at our core) is what remains. As followers of Jesus, at the core of who we are is compassion and love,” Ansley said.

The Rev. Danny Yang, pastor of Westbury United Methodist Church, used John 1:1-5, 14 in a sermon entitled “Life on the Dirty Side.”

“I learned a lot of things last week: for example, what life is like on the dirty side of the hurricane. One thing I did not learn is why these natural disasters happen. But just because we don’t have an explanation, doesn’t mean God is silent,” Yang said.

Yang saw the dirty side of the hurricane up close last week when a neighbor helped him canoe to the church from his own flooded home so they could get the church doors open to provide shelter.

Around 50 people spent the night at the church, including the church’s business manager, Steve Ewin, who brought his family and their five pets.

“Several times, people were praying at the prayer rail in the sanctuary,” Ewin said.

Yang was looking forward to light after the storm.

“After this long, horrendous week, we know this: The sun will shine. And that’s what our faith adamantly claims: The light shines in the darkness, and the darkness did not overcome it. We are living through a disaster worse than most of us expected, but we’ve all seen and heard stories of light breaking through.”

Gilbert is a multimedia reporter for United Methodist News Service. Contact her at 615-742-5470 or [email protected]. The Rev. Will Rice, director of communications and media support for the Rio Texas Conference, and Cintia Listenbee, director of communications at Westbury United Methodist Church, contributed to this report. News media contact: Vicki Brown at 615-742-5470 or [email protected].