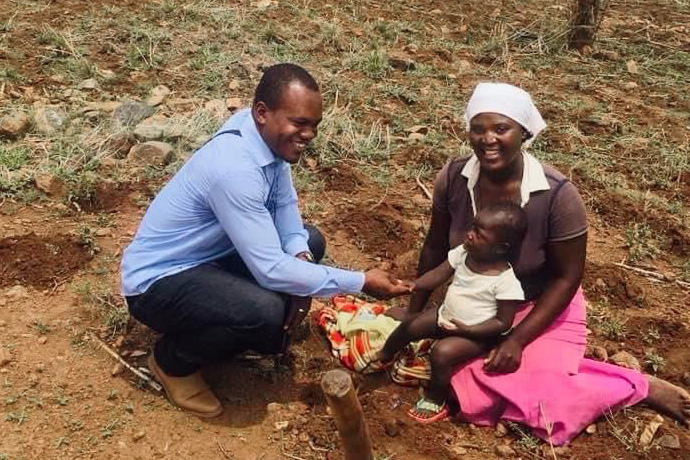 The Rev. César Lodiha Akoka visits with one of the widows he is assisting through his Volunteers in Mission club started at Africa University in Mutare, Zimbabwe. Photo by Chenayi Kumuterera, UM News.

• The many times God answered his prayers led the Rev. César Lodiha Akoka to start the first Volunteers in Mission club in his home of Kinshasa, Congo.

• Born to two United Methodist pastors, his dreams as a child didn’t include becoming a pastor himself.

It was from the many times God answered his prayers that the Rev. César Lodiha Akoka felt called to start the first Volunteers in Mission club in his home of Kinshasa, Congo.

“I feel passionate about this work since it is the only way that we can put love into action,” he said.

Born into a family of nine children with United Methodist parents, he often felt “stress.”

“I told my father that I will make sure to study in my life in order to see my children growing up without being stressed, because education is a great weapon that can help us change the world,” he said.

But his dreams as a child didn’t include going to Africa University in Mutare, Zimbabwe, and becoming a United Methodist pastor.

He always stayed in connection with his local church, serving as youth president, local church secretary and vice president in the East Kinshasa District of the West Congo Conference.

“One day, in 2013, my pastor gave me the opportunity to preach during a special day for youth,” Akoka said. “After preaching, I was told that I have God’s calling into pastoral ministry, but I did not want to be a pastor.”

The wheels were already rolling to get him on the path of becoming a pastor, however. Bishop David Yemba, retired bishop of the Congo Central Conference and chancellor emeritus of Africa University, told him his name was on the student pastors list at Africa University.

“I was speechless. I told my parents and they said if it is really God’s calling, then you go.” 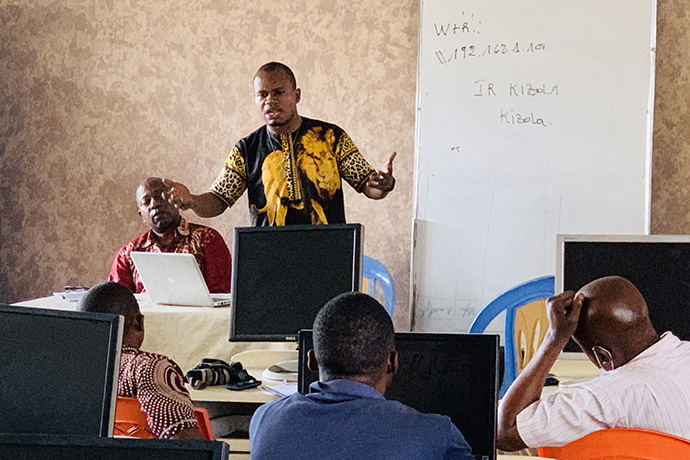 At the 2015 West Congo Annual Conference, Akoka was presented to the elders, who voted for him to go to Zimbabwe to attend Africa University.

His first days at the university were hard.

“I could not get pocket money from home and I could not afford soap, toothpaste and the basics,” he said. “I was crying and praying in the chapel, asking God why I had all these things in my life.”

Soon after that, he learned of a program on campus organized by the student affairs office that helps students get their essential needs.

He also qualified for an International Grants and Scholarship Program (GRASP) through the United Methodist Board of Higher Education and Ministry. The scholarship is a competitive, need-based program to help offset the costs of students studying at a Methodist-related institute within a central conference (conferences outside of the U.S.).

God’s answer to his prayers gave him a vision to help other students facing the same hardships. He joined the university's Volunteers in Mission club.

“God made ways and I found support,” he said.

Akoka is currently working with 20 young people in Kinshasa and 37 Africa University students through the Volunteers in Mission clubs. The groups work with orphans, widows and other marginalized people in the community, offering various support during COVID-19 and training on information and communications technology and other subjects.

His support for mission work came after he met Karen Distefano, United Methodist Volunteers in Mission and Disaster Response director for the South Central Jurisdiction, in a virtual mission Zoom meeting.

“When we met with Rev. Akoka recently by Zoom, we were all struck by his passion for mission and discipleship,” she said. “Not only does he want to help marginalized people, he also wants to help make disciples of Jesus Christ by showing youth and young adults how to live out the Gospel.”

The virtual mission model was developed in response to the pandemic when people could not travel but still wanted to stay in touch with their mission partners around the world, she said.

Distefano asks for the prayers of the U.S. churches for Akoka and his young adult mission club members and the people they are serving.

“We will be working with him on the UMVIM site application for when it is safe for teams to travel,” she said.

Distefano is planning the next virtual mission for later this year.

“We often think about UMVIM as mission teams from the U.S. that travel to work on disaster response in the U.S. or work on various projects overseas,” said Tom Lank, Northeast Jurisdiction coordinator for United Methodist Volunteers in Mission.

Akoka’s work is a “good grassroots mission activity,” Lank said. “This is the church being the church and putting Christian love into action.”

Akoka remains passionate about his work.

“I have seen there is hope and more blessings in being a volunteer in the mission of God,” he said. “It is the only way we can put love into action by bringing a smile to orphans and widows, vulnerable people.”

Gilbert is a freelance writer in Nashville, Tenn. Media contact: Julie Dwyer at (615) 742-5470 or [email protected]. To read more United Methodist news, subscribe to the free Daily or Friday Digests.

The feature film “80 for Brady” is based on a group of real-life friends who bonded over their love of football and especially quarterback Tom Brady. One of the film’s inspirations is 'cradle Methodist' Elizabeth “Betty” Pensavalle.
Theology and Education