Windley preaches. He also sets up chairs and checks the sound system.

The church has grown in worship attendance, but what it’s able to pay Windley doesn’t cover his mortgage payments.

Meanwhile, his workweek, with both jobs, can run to 70 hours.

“My wife would tell you I’m not sane,” Windley said, quickly adding that he feels peace and purpose in ministry.

More and more, The United Methodist Church is turning to part-time licensed local pastors like Windley to lead small churches in the United States.

Read profile of the Rev. Michael Funkhouser, a part-time local pastor and West Virginia’s 2013 Teacher of the Year.

Many balance a full-time secular job with church work, and most don’t have a seminary degree. But they often bring workplace skills and a high level of commitment — and they work for less than full-time pastors.

So in a denomination that’s shrinking in the United States, part-time pastors represent a growing category.

“I’m not sure the denomination as a whole has opened their eyes to this,” said retired Bishop Alfred Gwinn, who chaired the 2008-2012 Ministry Study Commission. “We’re very dependent on part-time pastors.”

“If First Bisbee closed, who would feed the people?” she asked, referring to a food bank she helped the church start in this impoverished area by the Mexico border.

She’s sure her business skills have helped her as she leads the 150-member rural church.

“I’m a really passionate advocate for bivocationality. I think there needs to be a ton more tentmakers,” Chapman said, referring to the occupation attributed to the Apostle Paul.

Most lead pastors continue to be full-time ordained elders who have earned a master of divinity degree at a United Methodist-approved seminary and passed through a provisional member elder phase. They are guaranteed a minimum salary, as well as health insurance, housing, utilities and retirement benefits.

Conferences vary in their minimum salaries, with most around $40,000. But the total package swells with benefits.

“In (the) Western Pennsylvania (Conference), it takes $90,000 to $95,000 for a local church to afford an elder,” said Bishop Thomas Bickerton, who leads the conference. “That becomes a pretty expensive item for a local church.”

Meanwhile, The United Methodist Church in the United States has seen a gradual decline overall in membership and attendance. About 78 percent of U.S. churches averaged fewer than 100 in worship in 2013, up from 74 percent a decade earlier, according to the denomination’s General Council on Finance and Administration.

Many churches that small struggle to afford an elder, even one they might share with another small church, said the Rev. Lovett Weems, director of the Lewis Center for Church Leadership at United Methodist Wesley Theological Seminary.

Increasingly, those churches get appointed a part-time licensed local pastor, who is trained first in a licensing school, and then begins ministry while pursuing the Course of Study education program that the denomination requires such pastors to complete over 12 years.

Bickerton has seen the trend play out in his conference.

“It becomes inevitable that (small churches) are going to approach us and request a less-than-full-time position,” he said. “Over the last 10 years we have seen a doubling in the number of part-time local pastors.”

Denominational statistics show that from 2010 to 2015 the number of ordained elders and provisional member elders appointed to churches dropped from 15,806 to 14,614.

In that same period, the number of part-time local pastors grew from 4,261 to 5,178. Supply pastors — who typically serve small churches on a fill-in basis and include lay speakers and clergy from other denominations — grew from 1,163 to 1,849.

One factor in declining elder numbers is that retirements have outpaced newcomers. Another relevant statistic is that the overall number of United Methodist churches in the United States has declined, with closings running ahead of church starts.

But Bishop Kenneth Carter of the Florida Conference is among the denominational leaders who have witnessed a shift within the clergy ranks.

“The Florida Conference has historically been a region of larger churches,” Carter said. “And yet in many contexts, the resources of the local church cannot sustain salary and benefit structures of full-time elders.” 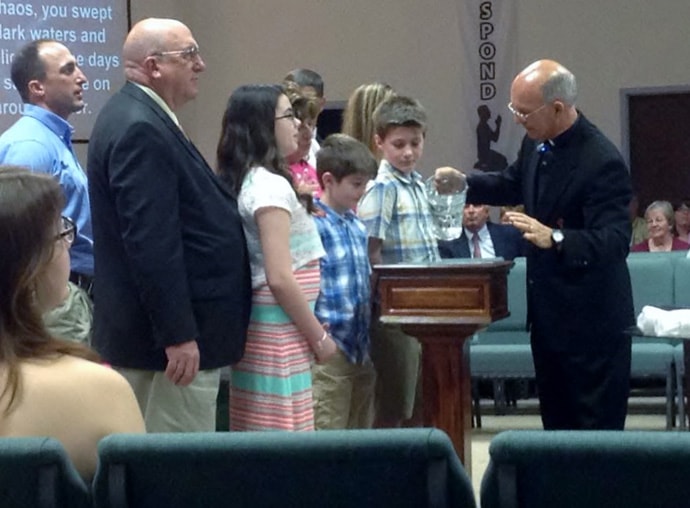 The changing reality can be seen with the Rev. Scott Masters and Asbury United Methodist Church in Chesterfield, New Hampshire.

Masters, an economist for an automotive manufacturer, is the first part-time licensed local pastor to serve Asbury. The church, which averages about 40 in worship, had long shared an elder with one or more other congregations. Asbury pays Masters $14,400 a year, and covers some of his expenses.

“I carry my own insurance, I pay for my own mortgage, and the church walks away in a better position,” he said.

Masters calls balancing two jobs and family life a “mega-challenge,” and notes that he uses a tape recorder to collect sermon ideas while commuting 45 minutes to his secular office.

He believes his church has become more self-reliant, knowing his time is limited; and he believes the savings on his salary has helped Asbury do more outreach ministry.

“We serve close to 10,000 people a year in food ministries,” Masters said. “It’s a small but incredibly busy place.”

Currently, local pastors are licensed, not ordained. But some church leaders favor ordaining them as "local elders," a term that has precedent within Methodism.

New Moyock United Methodist Church in Moyock, North Carolina, is another church that’s led by a part-time local pastor after having long had ordained elders.

The church had been down in attendance and teetering financially, to the point that it considered selling its building. But under the Rev. Bill Masciangelo — who became a local pastor after careers in the U.S. Marines and the hospitality industry — regular attendance has doubled to about 110 and finances have stabilized.

Masciangelo estimates he spends five to six hours a day on church work. He gets paid about $35,000, and doesn’t need the church’s help for housing or health insurance. At 70, he’s full of energy, to the point that he teaches kettlebell exercise routines at the YMCA.

The Rev. Gil Wise oversees Masciangelo as superintendent of the North Carolina Conference’s Beacon District, and confirms that the pastor is a bargain for New Moyock United Methodist. But he prefers to emphasize Masciangelo’s accomplishments.

“It’s a totally different church than when he arrived,” Wise said. “It’s grown on every front, including community involvement.”

Wise has other part-time pastors who he says have been an “incredible benefit” to churches. Fellow district superintendents agree that the case for such clergy goes beyond economics.

“This is probably a strong statement, but I would more quickly lose my elders than I would my local pastors,” said the Rev. Michael Estep, superintendent of the West Virginia Conference’s Potomac Highlands District.

Estep’s largely rural district last year had 152 churches but only 24 elders. It makes sense that he would be grateful for part-time local pastors and supply pastors.

But it’s more than that.

“Local pastors may not have a seminary education but many of them come to the ministry as a second career, and they may bring other educational experiences, and certainly their other work experiences,” he said. “They’re also familiar with the communities and the culture that is here.” 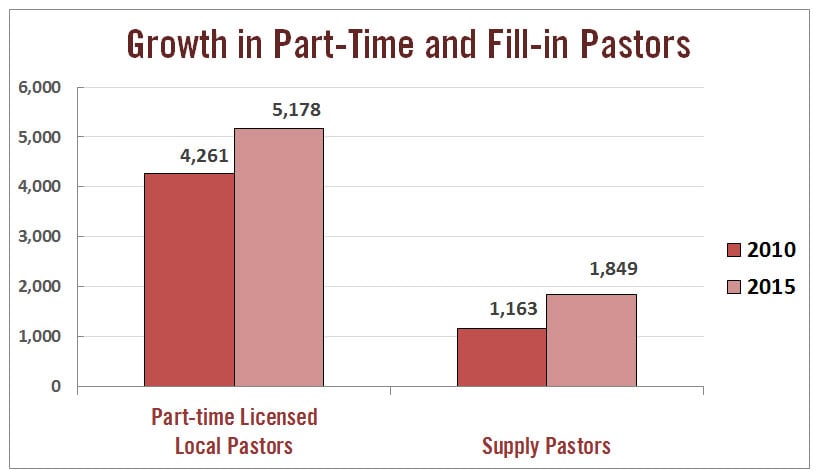 Both part-time licensed local pastors and supply pastors are growing categories in The United Methodist Church in the U.S., while elders have been declining in number. Data source: GCFA

Concerns about the clergy shift

But the Rev. William Lawrence, dean of Perkins School of Theology, worries about the growing dependence on part-time clergy.

He appreciates their commitment and acknowledges they are needed in many contexts. The United Methodist seminary he leads is a Course of Study site, with Perkins professors teaching classes.

But Lawrence believes Course of Study doesn’t come close to substituting for a master of divinity degree, and notes that many supply pastors don’t get much training at all.

“How are you going to be a serious contributor to discussions about end-of-life or beginning-of-life issues, matters of peace and war, economic and social justice, if you don’t have the educational background?” Lawrence said. “What we’re actually saying is that the people in that local church aren’t that important. … It concerns me enormously.”

The Rev. Jeremy Smith, an elder and blogger on United Methodist issues, is a fan of part-time pastors but notes that they tend not to be involved in conference committee work. As they have grown in number, that has led, in his view, to an erosion of “connectionalism” and less democratic decision-making.

And because they don’t enjoy security of appointment, as elders do, Smith sees them as less likely to be prophetic voices.

“I’m able to speak on issues of controversy,” Smith said. “I don’t worry about losing my job because of that. I think a local pastor may.” 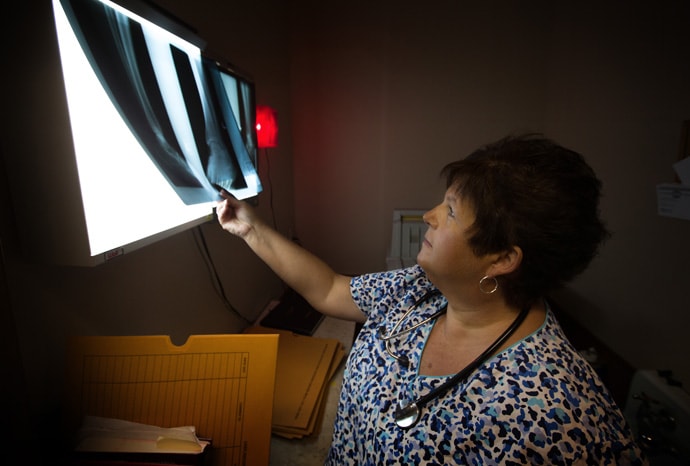 The Rev. Debbie Williams is an X-ray technician and a licensed local pastor in The United Methodist Church. Photo by Mike DuBose, UMNS. View additional photos.

But the Rev. Sky McCracken, superintendent of the Memphis Conference’s Purchase District, is a full-throated defender of part-time pastors, including on the question of depth.

“Some of the best sermons I’ve heard on Wesleyan theology have come from these guys and gals that are part-time clergy,” he said.

She’s preaching at both churches nearly every Sunday, driving 80 miles round trip. One of the churches is holding on, but the other has seen growth.

Both "absolutely love her," McCracken said. 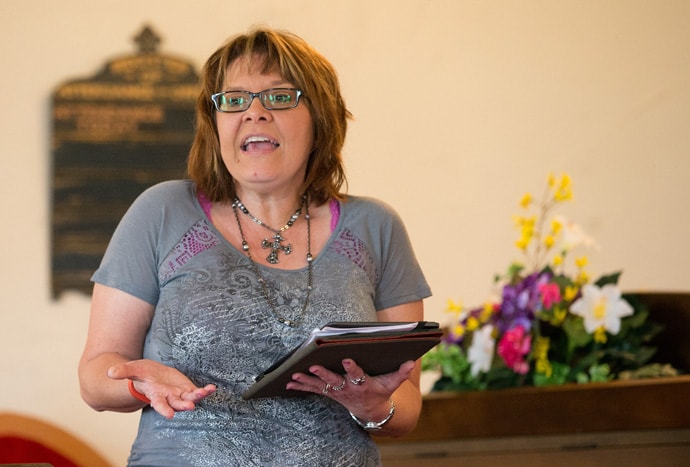 Church leaders may disagree about whether increasing dependence on part-time pastors is good, but there’s little doubt the trend will intensify.

Weems, of the Lewis Center, notes that baby-boomer elders are continuing to retire at high rates and many more will retire soon, given that 55 percent of active elders are 55 years or older, the highest in denominational history. That, combined with more churches struggling to afford an elder, he thinks will boost part-time pastor numbers further.

The Oklahoma Conference leadership foresees that happening and has created a Bi-vocational Pastors Academy to groom 150 such clergy for small churches. Nearly 250 of the conference’s churches have budgets under $80,000 and can’t afford an elder even if one is available.

“We’re trying to find committed, trustworthy laity who are indigenous to the area, who do not see the church as a ‘career,’ but who follow Jesus and have a heart to help others know, love and follow him too,” said the Rev. B. Craig Stinson, director of connectional ministries.

The Rev. Dottie Escobedo-Frank, a Desert Southwest Conference superintendent and co-author of a book about church leadership, points out that John Wesley made pastors of lay people to spread the Methodist movement in the 18th century.

She thinks that Methodism, going forward, will need many such pastors again.

“It’s our past and our future both,” Escobedo-Frank said.